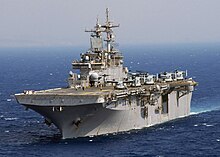 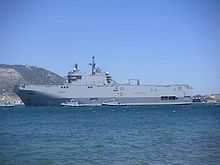 Helicopter carriers are warships with a mostly continuous flight deck for helicopters . A general distinction is made between helicopter carriers with an internal floating dock (LHD) and external loading ramps (LPH) . The central element of each carrier is the hangar below the deck, in which the helicopters can be serviced and repaired. Unlike CTOL - aircraft carriers helicopter carrier are significantly smaller, but can change the size of STOVL reach -Flugzeugträgern, which they often are similar in basic design.

Helicopter carrier of the Algerian Navy

Helicopter carriers are usually used as landing ships in amphibious warfare . During landing operations, soldiers are brought ashore not only by helicopter, but also by landing craft. These are loaded in internal floating docks for LHDs and via ramps at the stern or on the side for LPHs. The ships also have facilities to carry large numbers of landing forces. The carriers of the United States and Great Britain also have fully equipped command centers from which large operations can be directed. Helicopter carriers are also used for submarine hunts (e.g. Japanese Hyūga class ).

Some helicopter carriers carry a limited number of STOVL fighter aircraft, but this is a secondary function. With the introduction of the convertible aircraft V-22 Osprey , another carrier-compatible aircraft model was added that can operate from practically all helicopter carriers. Even if the V-22 was initially only introduced by the US armed forces, there were test landings of American machines on ships of other nations as part of international cooperation.

Conversely, many navies assign their STOVL aircraft carriers a secondary role as helicopter carriers. In both cases, however, the primary task of the ship is always decisive for the official classification.