The following important information is missing from this article:
History, nuclear weapons arsenal , war crimes, general information, such as precise command and organizational structures / classifications etc. All in all, simply not detailed enough for a globally significant armed force ! (see US armed forces )
Help Wikipedia by researching and pasting it .

Great Britain became the third nuclear power in the world in 1952 . British strategic nuclear weapons are on submarines of the Royal Navy stationed. Currently, there are boats of Vanguard-class submarine with intercontinental ballistic missiles of the type Trident , that of the United States has been developed.

English troops in the battle of Waterloo 1815 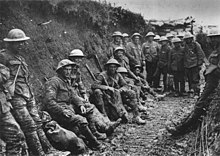 The United Kingdom has a centuries-old colonial and imperial tradition of stationing soldiers on every continent of the world. Great Britain was at times the largest world empire , comprising a quarter of the world's land mass and population, and was the leading naval power in the 19th century . Many men from the British colonies also regularly served in the armed forces of the Empire .

The most important war participations since the emergence of the British nation-state were the Seven Years War (1756–1763), the Napoleonic Wars , the American War of Independence (1775–1783), the Crimean War (1853–1856) and the two World Wars. During the Second World War (1938–1945), around ten thousand German and Austrian citizens who fled their homeland for political or racial reasons also served in the British armed forces.

British military units and advisors are now mainly stationed in the former colonies or are active in international missions.

Institutionalization of the Ministry of Defense

Until 1940, different ministries were separately responsible for military affairs and for the armed forces. The British Department of Defense today grew out of a makeshift arrangement in World War II that was only institutionalized in 1964. It combined the competencies of the Admiralty , the War Office and the Air Ministry .

The National Audit Office issued a report on November 3, 2006 that the military was chronically 2% to 3% under staffed. The operating speed tends to be too high. The Defense Ministry replied that there were bottlenecks, but rejected the fact that the armed forces were overstretched.

On November 30, 2005, the British House of Commons ratified the Armed Forces Act . The law, which became final on November 8th with the signature of the Queen, merged the law books of all armed forces and introduced new laws.

Associations of the armed forces were also regularly sent on combat missions after the Second World War. Soldiers fell every year from 1968 to 2015; There were no fallen in 2016.

The British armed forces are tasked with protecting the British mainland and overseas territories , enforcing British security interests and participating in multinational peace missions . By definition , the UK Armed Forces consider themselves committed to the international community.

The British government describes the integration into the structures of NATO as existential for its defense policy.

In July 1998, a year after the new Labor government took office, the UK Department of Defense published a strategic base paper called the Strategic Defense Review (SDR) that reimagined the country's defense policy . This reorientation stood in contrast to two previous documents called Options for Change from 1990 and Front Line First from 1994, which dealt primarily with the downsizing of the armed forces. In 2002, in response to the terrorist attacks on September 11, 2001 , the Department of Defense published a supplement to the Strategic Defense Review , the New Chapter , and in 2003 published an expansion of the SDR called Delivering Security in a Changing World .

A unit of the Welsh Guards in their typical red parade uniform at the annual Trooping the Color in honor of their Commander-in-Chief, Queen Elizabeth II

According to the Westminster system and British legal tradition, the British Prime Minister, currently Boris Johnson , is the Commander in Chief of the Armed Forces. The day-to-day development of defense policy is taken over by the Secretary of State for Defense , who advises him on defense issues and informs him about the state of the armed forces. The Ministry of Defense is not divided into departments for the armed forces, as in the USA, but sees the armed forces as a political unit, the administration of which five state secretaries (officially: Minister or Under Secretary depending on the department ) are charged with managing individual organizational aspects .

The defense minister is from the five-member General Staff of the United Kingdom ( Chiefs of Staff advised), are included in the all branches of the armed forces. The General Staff forwards instructions and orders from politics to the addressees via the military command lines.

See also : List of Commander in Chief of the British Army 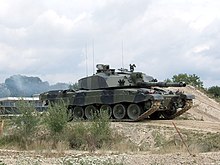 The Royal Air Force has a strength of around 34,000 men and is equipped with 740 aircraft and helicopters. It has 41 Panavia Tornado , 154 Eurofighter Typhoon and 90 BAE Hawk aircraft .

The last SEPECAT Jaguars were replaced by the Eurofighter Typhoon in April 2007 .

The Royal Navy with 38,550 men and 90 warships one of the largest navies in the world. The Royal Navy has four submarines with nuclear ballistic ICBMs of the Vanguard class , a helicopter carrier ( HMS Ocean ), eight destroyers and 17 frigates .

Of the three branches of the armed forces, the Royal Navy has been hardest hit by savings since the Strategic Defense Review in 1998. Among other things, the number of frigates and destroyers was reduced from 35 to 25 and minehunters from 25 to 16. The submarine flotilla will also be reduced from eleven to seven hunting submarines in the medium term . Several years of delays in several armaments projects, including the Queen Elizabeth-class aircraft carriers and the Astute-class submarines , mean that some ships have to be deployed well beyond their planned service life. Only the capacities of the amphibious units have been increased with a total of seven new landing craft since 1997.

In connection with the austerity policy, the decommissioning of HMS Invincible in 2005 attracted particular public attention . Critics accused the government of trying to offset the high costs of the Iraq war by decommissioning the aircraft carrier, which was retreaded in 2003 .

According to a calculation by SIPRI, the UK spent the equivalent of $  65.3 billion ( purchasing power parity and exchange rates for 2009) on its armed forces. The UK, which spent a few hundred million US dollars less than France, had the fourth largest defense budget in the world, but it was spending slightly more on a per capita basis. Compared to 1999, this was an almost 21 percent increase in real terms.

This budget, which is very high in relation to troop strength, is due to the extraordinarily costly procurement projects that have been up for procurement in Great Britain since the turn of the millennium (including 232 Eurofighters , 150 Joint Strike Fighters , 2 aircraft carriers , 6 Daring- class destroyers , 7 nuclear-powered U Boats ). In addition, the British armed forces are active in many missions around the world and are pursuing the modernization of their nuclear arsenal .

When calculating the actual defense expenditure incurred, the Ministry of Defense undertook a two-step change in its accounting practice at the turn of the millennium. Until the 1998–99 budget year , it accounted for the provisions principle , until in April 1999 it prepared the changeover to accruals and deferrals in an in-house process called Resource Accounting and Budgeting . The Ministry of Defense considered this step to be necessary because of its substance-heavy nature.

The armed forces also maintain a number of military bases abroad . This includes several bases in Germany with a total of 20,000 soldiers (complete withdrawal by 2020, see British Armed Forces in Germany ) as well as two British territories in Cyprus with around 7,000 soldiers. Apart from the United States , no country has more soldiers stationed abroad than the United Kingdom. In December 2010, 67,000 British soldiers were stationed abroad, including around 9,500 in the war in Afghanistan . In December 2007, there were about 4,500 British soldiers in Iraq .

1   does not officially maintain its own armed forces

1  Lies mostly in Asia .  2  Has additional areas outside of Europe.