The BAE Hawk is a light British jet trainer and is designed as a fighter aircraft for close air support . The first flight took place in 1974 under the name Hawker Siddeley HS 1182 . The Hawk is still produced by BAE Systems to this day .

In the 1960s, the UK's Royal Air Force (RAF) needed a new aircraft to train their fighter pilots. It was supposed to replace the aging Folland Gnat . The SEPECAT Jaguar was originally intended for this task, but it turned out to be too complicated for flight training. In 1968 Hawker-Siddeley (now BAE SYSTEMS ) began developing a simple two-seat fighter aircraft. In contrast to the Folland Gnat, the Hawk ( German Habicht ) should not only be designed for aerial combat, but also for light bombing attacks in order to expand the training possibilities. One innovation was the raised rear pilot's seat, with which a better view forward was made possible. This concept was later adopted by many other manufacturers.

The first flight of the prototype took place in 1974. Two years later, the first machines were put into service with the RAF. A total of 105 Hawks are still in service with the RAF today. The jet proved itself both in training for air combat and in bombing raids. Due to its flight characteristics and maneuverability, student pilots can perform all flight maneuvers that are also possible on larger fighter aircraft. Although the Hawk can only fly in the subsonic range in regular flight, the construction is nevertheless designed for a maximum speed of Mach  1.2. This enables the pilot students to practice the transition to the supersonic range in a dive.

The Royal Navy took over twelve Hawks from the RAF in the 1990s. These simulate attacking fighter planes during air defense exercises by British warships.

The BAE Hawk achieved worldwide fame through the RAF aerobatic team, the " Red Arrows ". This has been using nine red painted hawks in their flight demonstrations since 1980. The Finnish aerobatic team " Midnight Hawks " and the Saudi aerobatic team " Saudi Hawks " also use this aircraft.

During an act of sabotage against British Aerospace on January 29, 1996 , activists severely damaged a BAE Hawk destined for Indonesia.

Hawk T.1
The Hawk T.1 is the basic version, which entered service in 1976. A total of 176 machines were ordered by the RAF, later 12 copies were taken over by the Royal Navy .
Hawk T.1A
From 1983 to 1986, 88 of these machines were converted for the use of AIM-9 Sidewinder missiles. This version was named T.1A. Since 2001 the Hawk T.1 aircraft have been converted, with parts of the fuselage being replaced. These are intended to reduce the weight of the machines and create additional storage space for weapons and additional tanks. With the exception of the Red Arrows, the still active machines are to be decommissioned by 2015; the end of service is targeted for the latter in 2018
Hawk T.2
The RAF calls the Hawk T.2 the Hawk Mk.128, see below

The Hawk 50 and all other series, with the exception of the Mk.128, were intended for export. It differs only slightly from the T.1. The main difference lies in the armament, since the type in Finland , Kenya and Indonesia should be used primarily as a combat aircraft and not as a training aircraft. A total of 89 machines were delivered to these three countries.

The Hawk 60 was developed on the basis of the Hawk 50. It has more modern engines and a modified fuselage, which significantly reduces the weight of the machine. The maximum weapon load is about 500 kg higher than that of the Hawk 50 / T.1.

The Hawk 100 is the further development of the Hawk 50. It can be equipped with an additional infrared camera , a so-called Forward Looking Infrared (FLIR), in the front fuselage and has improved wings, at the tips of which recordings for air-to-air missiles can be attached. The new HOTAS system makes it easier to control the machine despite additional electronics.

The latest versions of the Hawk have been in development since the mid-1990s. Thanks to new materials and the latest electronics, they have little in common with the original T.1. The jets are designed for a service life of over 50 years, more than twice as long as the previous models.

Hawk Mk.120
Beginner hunting trainer of the South African Air Force with Adour 951 engines, 24 ordered, shipped from 2000
Hawk Mk.127
Beginner's hunting trainer of the Royal Australian Air Force with Adour 871 engines, 33 built, including 21 examples assembled in Australia, delivered in 2000/2001, later modernized to the Mk.128 standard
Hawk Mk.128
RAF advanced jet trainers with Adour 951 engines and new EFIS displays, as they are also used in the Eurofighter Typhoon , 30 ordered, delivered from 2011
Hawk Mk.129
Export version for Bahrain , six built, delivered from 2003
Hawk Mk.132
Execution of the Indian Air Force and the Indian Navy with Adour 871 engines, 24 built by BAE, the rest by HAL, a total of 105 for the Air Force and 17 for the Navy (currently in progress)

The Hawk 200 was developed as a single-seat, low-cost, multi-role fighter aircraft for export customers who are primarily intended to replace the Hawk 50 and 60 series. The technical equipment is essentially based on the 120 series. A total of 62 machines have been ordered so far. 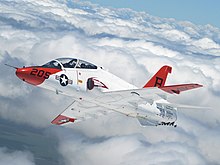 The T-45 Goshawk was developed as a carrier-supported version for the US Navy by British Aerospace and McDonnell Douglas (Boeing since 1997) based on the Mk.60 for the VTXTS tender. Compared to the Hawk, the machine had a catch hook under the stern for carrier landings, a raised main landing gear and an extended, reinforced nose landing gear with double tires for catapult launches. In addition, the flight characteristics in speed ranges below 200 km / h were improved by means of slats extending over the entire span in order to enable the slow approach to aircraft carriers. In addition, two retractable air brakes were attached to the rear. The tail surfaces have also been enlarged; the bow of the fuselage was designed sloping down more to improve visibility. In November 1981 the decision was made to buy this machine, which was then named T45TS (T-45 Training System). The actual development began in 1984 and two prototypes were built in 1986. The first flight took place on April 16, 1988 and the first series copies were delivered to the US Navy in early 1991.

The first carrier testing began in December 1991 on the USS John F. Kennedy ; In February 1992, the T-45A officially entered service in several training squadrons (e.g. VT-21 and VT-22 at Navy Air Station in Kingsville , Texas). Of the 221 units ordered, the first 83 machines (serial numbers A001 to A083) were delivered as T-45A, before production was switched to the more modern T-45C in 1997 (serial numbers A084 to A221). This had its first flight in October 1997 and was put into service from 1999. It differs from the A variant in that it has a modernized cockpit with multifunctional screens and digital avionics.

The last of a total of 221 machines was delivered to the US Navy on October 20, 2009. The remaining T-45A will be brought to the T-45C booth by 2013 as part of the Required Avionics Modernization Program (RAMP). Actually, the procurement of 300 aircraft was planned, as a land-based version was planned with the T-45B. However, this became superfluous due to the extension of the use of the previous models TA-4J Skyhawk and T-2C Buckeye . By August 26, 2010, the three training units “Training Air Wing” 1, 2 and 6 had completed over one million flight hours on the T-45. It should remain in service until 2035. In April 2017, a persistent problem with the aircraft's oxygen supply became known, which led to the US Navy temporarily decommissioning its entire fleet.

BAE Systems and Hindustan Aeronautics present their jointly improved Advanced Hawk jet trainer at Aero India in Bengaluru. The new version has been worked on with company funds for about two years. The Advanced Hawk demonstrator took off on its maiden flight at BAE Systems in Warton in early June 2017. Among other things, a current cockpit configuration with large screens and the LiteHUD is planned for the aircraft. The wings are given slats to increase maneuverability and reduce take-off and landing distances. A new self-protection system can also be installed. An air refueling probe is also installed. HAL and BAE Systems also offer a weapon system. Up to 3000 kg payload can be carried at eight stations, including precision bombs.

Explosive ordnance up to 3,085 kg at five external load stations