The Sikorsky H-3 Sea King or S-61 , also known as the Jolly Green Giant in its SAR version , is a multi-purpose helicopter equipped with two shaft turbines from the US helicopter manufacturer Sikorsky Aircraft Corporation . It is used by the United States Navy and numerous other troops and states.

SH-3A over the USS Kearsarge in the early 1960s 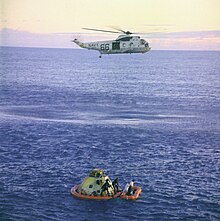 The legendary "sixty-six" , a SH-3D, during the recovery of the landing capsule from Apollo 10

The Sea King had its maiden flight in 1959 and was in service with the US Navy from June 1961. From the beginning it was intended for ship-based use. The five main rotor blades can be folded hydraulically to reduce the space required by the helicopter in the ship hangar. The main area of ​​application was the fight against submarines ( English Anti-Submarine Warfare , ASW). It could also be used for anti-ship, search and rescue , transport, communication and early warning tasks. In the US Navy he was replaced in the ASW and SAR role by the SH-60F Sea Hawk from the early 1990s . Only the United States Marine Corps uses the helicopter for training and test purposes.

The Sea King was built in the UK by Westland Helicopters Ltd. manufactured under license who developed a modified version for the British Royal Navy . This variant is equipped with British Rolls-Royce- Bristol-Gnome-Turbines as well as British avionics and ASW equipment. The British Sea King first flew in 1969 and was operational a year later. It was also used by the Royal Air Force and sold around the world. Helicopters of this variant were manufactured under license in Japan (by Mitsubishi ) and Italy (by Agusta ).

Armament and equipment of the Sea King vary with the respective operational role. A typical armament consists of four torpedoes , four depth charges or two anti-ship missiles of the type Sea Eagle or Exocet . In SAR operations, the cabin offers space for 22 people or nine flatbeds and two medical personnel. Up to 28 soldiers can be transported when transporting troops.

The Sea King can land on the water and, in an emergency, move on the water with just one of the two turbines.

A copy of SH-3D, the number 66, the helicopter Season 4 of the US Navy, became a celebrity than as part of the Apollo space flight program of NASA in the Pacific gewasserten astronauts barg.

Some Sea King with special equipment and special paintwork serve as the official helicopters of the US President . They are operated by the United States Marine Corps . The machine's call sign is Marine One when the President is on board.

On May 31st and June 1st, 1967, two Sikorsky HH-3 Jolly Green Giant made the first helicopter non-stop flight across the Atlantic in 30 hours and 40 minutes . They were refueled nine times by Hercules planes.

Sea King of the German Navy

Of the 22 Westland Sea King Mk. 41 procured by the German Navy , 21 are still in service with Marine Aviation Squadron 5 . A Sea King (tactical registration: 89 + 59) crashed into the North Sea on November 17, 1998. After a main gearbox damage, it was supposed to be transported to Kiel for repair - hanging under a Sikorsky CH-53 transport helicopter of the German Army . After a few nautical miles, the Sea King swayed to such an extent that the transport harness on which the helicopter was hanging had to be cut to prevent both machines from crashing. When it hit the water surface from around 100 m, the 89 + 59 was completely destroyed. Another helicopter (89 + 61) was previously replaced by a new Sea King after an accident. The old 89 + 61 is still used as a SAG (school and training device) in technician training. Since 2006, the engines of the German Sea King have received an increase in performance.

From 2020, it will be replaced piece by piece by the NH90 Sea Lion marine transport helicopter (details here ).

Commissioned from 1972 to 1975, the helicopters have already been modernized several times. This modernization process will continue for the next few years, as the possible successor helicopter MH90-NG , which was to replace the Sea King as NFH as early as 1997, is further delayed. Legal requirements and no longer available spare parts for the sometimes very old systems and devices make it necessary to replace them with new and more modern devices. One of the main tasks is sea ​​rescue ; it is also used as an on-board helicopter for the class 702 task force supply . Helicopters were also in action in this role in Africa (Djibouti, Horn of Africa, Ivory Coast), in Asia (tsunami catastrophe) and as part of UNIFIL off Lebanon. The armament with guided missiles was given up. So the Sea King only has self-protection through chaff , flare and an M3M machine gun . In addition, the MFG 5 specializes in operations in the context of KSK operations .

A successor model is urgently needed for the aging Sea King, also because of increasing maintenance costs. As potential candidates NH90-NG, the Navy version of the NATO helicopter apply NH90 of NHIndustries and the Sikorsky CH-148 Cyclone a military derivative of, Sikorsky S-92 . The most likely solution is "18 naval helicopters derived from the NH90 program". This was agreed in a letter of intent between the Federal Ministry of Defense and the Eurocopter Group in March 2013 as compensation for a lower purchase of the Eurocopter Tiger by the German armed forces. In November 2014 it became known that an order for the NH 90 is imminent and that the planned number of items will be adjusted.

Portions of this article appear since 2014 is out of date to be .
Please help to research and insert the missing information .

However, the naval leadership considered at the time to continue to fly the helicopter until 2026. The fewer helicopters that are ready for use, the fewer flying hours are possible. Some of the helicopters have been and are being cannibalized to make other helicopters airworthy.

The Canadian Navy bought 41 Sea Kings in 1963. The helicopters were very modern at the time and proved themselves well, and they were also popular with their crews. The Canadians developed a technique to land the large helicopters on small ship decks using a winch to pull the machine down. This earned them the nickname Crazy Canucks .

CH-124A on board the HMCS provider

As the service life increased, the Sea King became more unreliable and difficult to maintain. Twelve have now crashed, with ten people dead. Every Sea King now requires 30 hours of maintenance for an hour of flight and is therefore unavailable 40 percent of the time. At the end of 2003, the entire remaining fleet had to stay on the ground for a few weeks after two engines had engine failures within a short period of time.

From November 2008, the Canadian CH-124 Sea King will be replaced by 28 CH-148 Cyclone helicopters from Sikorsky. These represent a marine variant of the H-92 Superhawk developed for Canada .

Canadian Sea King pilots have dedicated a song to their helicopter that is sung to the tune of the 1970s hit Seasons in the Sun :

"Goodbye papa, please pray for me,
My helicopter's crashing in the sea.
Refrain:
We had joy, we had fun, we had Sea Kings in the sun
But the engines are on fire and the Sea Kings must retire " 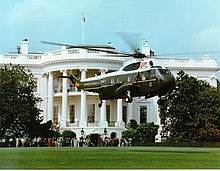 XHSS-2
Prototype of a submarine helicopter for the US Navy
YHSS-2
Pre-production machines, seven were built
SH-3A
Anti-submarine helicopters for the US Navy with AQS-10 or AQS-13 diving sonar and 1,250 WPS T58-GE-8B engines, 255 were built
HH-3A
Conversion of twelve SH-3A to rescue shot down crews in the Vietnam War . Expansion of anti-submarine equipment, installation of armor and machine guns.
CH-3A
Conversion of three SH-3A as transport helicopters for the US Air Force
NH-3A (S-61F)
Conversion of an SH-3A as a test helicopter for high speeds
RH-3A
Conversion and equipping of eight SH-3A for mine clearing
VH-3A
VIP transporter for the US Army and the US Marine Corps. Eight were newly built, one YHSS-2 and one SH-3A were converted.
CH-3B
later designation of the CH-3A
SH-3D
SH-3A with 1,400 WPS T58-GE-10 engines, 79 were built
VH-3D
VIP vans for the U.S. Marine Corps, 11 were built
SH-3G
improved transport version, 105 were converted from SH-3A / D
SH-3H
Greatly improved anti-submarine version, 145 were converted from SH-3A / D / G
SH-3H AEW
Early warning version of the Spanish Navy
UH-3H
Transport version, conversion from SH-3H
YSH-3J
Conversion of two SH-3H to test the sensors of the later SH-60 Seahawk

CH-3C
Transport helicopter, redesigned fuselage with rear loading ramp, 46 were built
CH-3E
CH-3C with 1,500 WPS T58-GE-5 engines, 45 were newly built, 41 CH-3C were retrofitted
HH-3E Jolly Green Giant
Equipping 50 CH-3E with armor, armament and an aerial refueling tube to rescue shot down crews
HH-3F Pelican
SAR helicopters for the United States Coast Guard based on the CH-3E, 40 were built. In 1990 the USCG took over and modified another six CH-3E from the USAF. 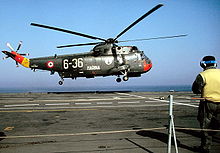 CH-124
Anti-submarine helicopters based on the SH-3A, 41 were produced by Sikorsky but assembled by United Aircraft of Canada
CH-124A
CH-124 with modernized avionics
CH-124B
CH-124A without diving sonar but with MAD probe; five were converted into transport helicopters in 2005
CH-124B2
Equipped six CH-124Bs in 1991/92 with greatly improved anti-submarine equipment. With the end of the Cold War, the conversion of further CH-124s was no longer necessary. later the CH-124B2 were converted into transport helicopters.
CH-124C
Modification of a CH-124 for test purposes
CH-124U
unofficial designation of four CH-124s converted into multi-purpose helicopters 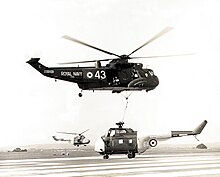 Sea King HAR.3 of the RAF 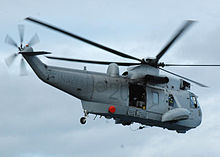 Cockpit of a Sikorsky S-61N

The following single-digit series were developed exclusively for the British Armed Forces , where they served for 49 years. Most copies were taken out of service by March 2016. An exception were some Sea King ASaC.7, which were still in use until September 2018.

The following two-digit Sea King series and the Commando versions, with the exception of the 4X, were all intended for export and are partly still in service (2018).

Sketch of the SH-3H Sea King

Weapons or containers can be attached to the side load stations. Mountings for movable machine guns can be installed in the doors and windows.

Helicopter of the US armed forces