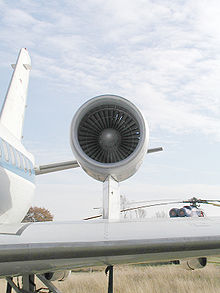 Unusual - engine layout on the wing

VFW 614 at Bremen Airport in the original factory painting

VFW 614 of the flight readiness of the BMVg

As a passenger aircraft, the VFW 614 is a low- wing aircraft equipped with two jet engines . It was the first aircraft developed in the Federal Republic of Germany after the Second World War that was also used in scheduled operations.

The development of the VFW 614 began in 1961 under the direction of program director Rolf Stüssel with the aim of creating a replacement for the outdated DC-3 . The plan was to construct a jet that would have the characteristics of a robust, short-start propeller machine. In 1969, the Dutch company Fokker VFW took over the project.

The rollout took place on April 5, 1971 in Bremen. The 32-minute first flight took place on July 14, 1971 with Leif Nielsen and Hans Bardill on board. At that time, Bavaria and General Air had a total of 26 options to acquire the machine, but no firm orders. The special feature of this otherwise conventional machine was the position of the engines, which were mounted on pylons above the wings . The reason was the planned use of the machines in developing countries, where engine damage often occurs because the engines suck in sand and small stones from the often poorly prepared slopes. For this reason, a thrust reverser was dispensed with. The chassis could also be kept short and correspondingly stable.

The machine was controlled by two pilots and could accommodate 40 to 44 passengers in the 2 + 2 seating arrangement.

During the test phase, the first prototype D-BABA was lost on February 1, 1972 (see below, section Incidents). After changing the angle of the V-position of both halves of the horizontal stabilizer, approval was granted by the Luftfahrt-Bundesamt on August 23, 1974. The machine performed well and its take-off and landing characteristics were particularly good.

The machine of the United Flugtechnischen Werke-Fokker GmbH (VFW-Fokker) was not a commercial success, only 13 series machines were built. State funds increasingly flowed into the Airbus program. By the end of series production on December 31, 1977, Touraine Air Transport ordered eight machines, Air Alsace three and Danish Cimber Air two. The first production aircraft (G4) for Cimber Air flew on April 28, 1975.

In addition, there were three aircraft for the flight readiness of the Federal Ministry of Defense . The Bundeswehr paid DM 12.5 million per machine in 1977. These machines were still in service with the Air Force until March and September 1998 .

Since the sale to America for the United States Coast Guard and Eastern Europe also failed, the federal government stopped supporting the development. Shortly thereafter, on December 15, 1977, Fokker decided to stop series production. The extended version GAC 616 was not developed either. The majority of the aircraft were returned to the manufacturer in 1980, who either scrapped them or left them to the German Armed Forces for attempted explosions. The three jets of the BMVg ready to fly were operated until 1998, after which they were sold to the Danish MUK-Air. However, this was never able to start flight operations with the model.

The last still airworthy machine of this type was the D-ADAM of the German Aerospace Center (DLR), which was stationed as ATTAS (Advanced Technologies Testing Aircraft System) at Braunschweig Airport. The DLR acquired the machine from VFW's bankruptcy estate in 1981 and converted it into a research aircraft for the simulation of flight characteristics of a type that had not yet been built by 1985. Due to the increasing wear and tear and the fact that the procurement of spare parts was becoming increasingly difficult, the aircraft was officially taken out of flight operations on June 27, 2012. On December 7, 2012, ATTAS took off on the last flight of a VFW 614 from the research airport in Braunschweig to the Schleissheim aircraft yard of the Deutsches Museum in Munich. The museum received the research aircraft as a gift for its extensive aviation collection.

The first machine (G4, OY-TOR) handed over to Cimber Air on August 28, 1975 can be seen today in the Technikmuseum Speyer.

A machine of this type (serial number G15, F-GATI) was converted into a technology demonstrator (ATD) by Daimler-Benz Aerospace Airbus in 1997 . For this purpose, parts of the avionics and the complete flight control were replaced. It was equipped with the fly-by-wire flight control system and was intended to serve as a test vehicle for the Airbus A380 . The machine was on the visitors' terrace at Bremen Airport from January 2002 to April 3, 2014 . It was restored in spring 2006 and was given a new paint job that corresponds to the factory design of the G11 (D-BABK). Since 2018 it has been exhibited on the Airbus site in Hamburg-Finkenwerder, on the museum square there.

One machine (G18) has been on display in the Aeronauticum Airship and Naval Aviation Museum in Nordholz since 2003 , and another (G14) has been in the EADS plant in Lemwerder near Bremen since 2003 . It should be modified by the University of Oldenburg as a cabin simulator for vibration tests. This project failed in February 2008 for financial reasons. The German Museum of Technology in Berlin had been trying to get this machine since 2005. In February 2008, the aircraft was transferred by land to Berlin and has meanwhile been stored in a hangar at the former Tempelhof Airport with dismantled wings. After the airport (and thus the hangar) has been closed, the machine is exhibited on the open-air site with the wings mounted again.

The last machine of the type (G19) has been owned by Lufthansa Resource Technical Training since 2003. In this EASA Part 147 training school, the VFW 614 serves as a flight simulator for maintenance work. Since its last flight in 2003 to St. Athan's airfield in South Wales, the G19 has moved to Cotswold Airport in England in summer 2010 with Lufthansa Resource Technical Training.

The DLR ATTAS mentioned above was set up in the exhibition hall of the Oberschleissheim aircraft yard of the German Museum in Munich. The handover to the museum took place on October 15, 2013. In his address, DLR board member Johann Wörner emphasized that the engineers at the DLR site in Braunschweig in particular had campaigned for the handover to the Deutsches Museum.