The Ilyushin Il-62 ( Russian Ильюшин Ил-62 ) was the Soviet Union's first long-range airliner equipped with jet engines . It is the successor to the Tupolev Tu-114 . The first flight of the Il-62 was in January 1963, on March 10, 1967, the first machine went into service with the Soviet airline Aeroflot . In 1971 the version Il-62M came out, which among other things had more powerful and more economical engines. Production at the Kazan Aircraft Production Association (KAPO) did not end until 1999. A total of 292 machines were built, of which 14 are still in use as of October 2015.

The IL-62 is an all-metal aircraft designed as a low- wing aircraft. The fuselage has an oval cross-section and a pressurized cabin . The workplaces of the five-person crew are located in the tip of the fuselage. The flight engineer has moved his seat back between the two pilots. The navigator and radio operator sit behind it across the direction of flight. Rooms for the electronic equipment are immediately adjacent to the cockpit. The weather radar antenna is housed in the tip of the fuselage. The passenger cabin with three seats on either side of the central aisle is divided into two sections; between them is the galley at wing height. On each side there are two passenger doors in the area of ​​the front fuselage and two emergency exit doors above the wings. Toilets, luggage compartments and parts of the aircraft equipment (radio equipment, hydraulics ) are housed in the stern .

The three-spar wings are heavily swept by 35 ° at the 1/4 line for a flight in the high subsonic range and have a sawtooth . At the ends of the wings there are three-part ailerons as flaps , with the middle and outer rudder being spring-loaded servo flaps . The divided landing flaps are designed as Fowler flaps and are electrically driven. The hydraulically operated spoilers are attached to the top of the wings . The wings are not equipped with slats . They are equipped on the central main torsion box with two spars each over the entire wing and two spars each up to the ailerons. The main torsion box is designed as an integral tank. Together with the two flat tanks, the Il-62 has a fuel capacity of 100,000 liters.

The aircraft has four NK- 8-4 jet engines (the prototype was still equipped with Ljulka AL-7 engines with only 75 kN) with an initial 99 kN and later with 103 kN take-off thrust. An aerodynamically clean wing, a simpler construction due to the uncomplicated introduction of force, the reduction of vibrations, the easier control of the aircraft in the event of an engine failure and the lower risk of emergency landings were seen as the advantage of the engine arrangement. Due to the position of the engines, however, the center of gravity is shifted very far back. This made the installation of a ballast tank necessary. The two outer engines are equipped with thrust reversers . Most of the exhaust gas jet is diverted to the front through adjustable flaps and grilles on the top and bottom.

The arrangement of the engines did not allow a tail unit construction in normal construction. Instead, the tail unit is designed in a T shape. The horizontal stabilizer is adjusted electrically using a spindle for trimming. In addition, the manually controlled elevator has an automatic and a manually operated trim tab on each side. The rudder is controlled manually and, in addition to yaw dampers, has a Flettner rudder and a trim tab.

The main landing gear consists of two two-axle trolleys, each with four wheels and hydraulically operated disc brakes. The main landing gear is hydraulically retracted inwards into the fuselage and wings. The steerable nose landing gear with double tires is hydraulically retracted forward into the fuselage. In the event of a hydraulic failure, the trolleys can be extended by their weight alone. In addition, the aircraft has an electrically retractable and extendable rear support which, when extended, prevents the aircraft from tipping over onto the stern if the center of gravity is unfavorable. The rear support enables the aircraft to be loaded or unloaded in any order (for example, loading starting from the rear). It also allows rolling backwards with the help of the thrust reverser and turning on a runway that is only 45 m wide. When retracted, the two wheels of the stern support, which are only half drawn into the fuselage contour, protect the fuselage from damage if the rear of the fuselage should come into contact with the ground during takeoff or landing.

With the described system, it was possible to fly off predefined waypoints, an automatic landing approach up to a height of 30 m, the automatic go-around and fly-off of traffic areas.

1985 all Il-62 and Il-62M in service were modernized. This included the installation of an inertial navigation system and modifications to reduce noise and emissions.

In 1971 the version Il-62M came out, which received, among other things, stronger and more economical engines of the Solovyov D-30 type . These engines were more economical and offered better thrust reversal. With almost the same set-up mass, the payload increased by 6 t. The machine received an additional fuel tank in the vertical stabilizer (increased range), revised and modernized cockpit equipment as well as modernized cabin equipment with lockable luggage compartments for the first time.

At the end of the 1970s, the Il-62MK came as a modernized Il-62M with a fuselage in half-shell construction, a modified torsion box, redesigned spars and modified wing paneling. New spoilers deploy automatically when the main landing gear is loaded. The main landing gear was made from improved materials and received new low-pressure tires, a wider track width and more effective brakes. The cabin, now designed for 195 passengers, was given a wider central aisle, which made it possible to use catering trolleys. The payload was increased by 2 t. This variant was never built, but some of the improvements (for example the reinforced wings) were used on newer Il-62Ms, which were then unofficially designated as Il-62M (K).

The Il-62M-WKP was a military version with a larger fuel supply and quieter engines than the Il-62M, of which only one machine was built for the Russian Ministry of Disaster Control.

Ilyushin Il-62 of the Government of Gambia

Ilyushin Il-62 of the Cubana

The IL-62 was used by almost all airlines in the socialist countries. The fleet of the GDR airline Interflug consisted to a large extent of Il-62 aircraft (1990 15 aircraft). The worst accident in the history of Interflug was the crash of an Il-62 on August 14, 1972. This type was also used by Egypt Air and in 1971 in wet lease with the Dutch KLM . The Il-62 is still in service with the North Korean Air Koryo and a few companies in the former Soviet Union.

Many of the previous operators of the Il-62 replaced their aircraft with the Il-62M. In addition, acquired CAAC Airlines , the Angolan TAAG and LAM Mozambique Airlines that version. The IL-62M was also used by the TG-44 of the NVA , which was responsible for flights for the political leadership of the GDR. The independent transport chain Il-62M existed within the TG-44 . With an aircraft of this type traveled Erich Honecker in 1987 to his visit to Germany.

After the fall of the Wall in 1990/1991, many Il-62s were replaced by Western types and thus found their way onto the used market as inexpensive and sought-after aircraft.

On October 23, 1989 a crew with Heinz-Dieter Kallbach landed the Interflug-Il-62 with the aircraft registration DDR-SEG on the grass runway of the Stölln / Rhinow airfield, which is only 900 m long . The aircraft, named "Lady Agnes" after Otto Lilienthal's wife, was a gift to the community of Stölln, in which Lilienthal crashed on August 9, 1896 during the last of its numerous flights from the 108-meter-high Stölln Gollenberg. An Il-62 needs a runway longer than 2500 m for a normal landing. This spectacular maneuver entered the Guinness Book of Records .

An Il-62 that previously flew in the USSR has been converted into a restaurant and is now located as a JetRest in Excalibur City , a shopping town on the border between Austria and the Czech Republic . Another Il-62 - the former Czech presidential plane - is in Heidenreichstein and is operated as the Magic Jet restaurant . An Il-62 that flew for the GDR airline Interflug is located near the Monument to the Battle of the Nations in Leipzig, and a restaurant is also operated there. Another Interflug Il-62 is now in the Merseburg Aviation Museum and is used as a café.

Of the 292 Il-62 / Il-62Ms built including prototypes, 15 have so far been destroyed in aircraft accidents. Among them was the prototype, which crashed on the 127th test flight on February 25, 1965 during a maneuver with maximum take-off mass and a very high angle of attack due to a drop in power in the left engine, killing the ten-man crew. In another four accidents ( LOT flight 007 on March 14, 1980 in Warsaw, Aeroflot flight 411 on July 6, 1982 in Moscow, on September 29, 1982 in Luxembourg and LOT flight 5055 on May 9, 1987 in Warsaw) Engine problems are the cause. In five other accidents (on June 16, 1972 in Cairo- Almaza, on August 20, 1975 in Damascus , on September 3, 1989 in Havana , on June 30, 1990 in Yakutsk and on July 24, 2009 in the landing accident of an Aria aircraft Air in Mashhad ) pilot errors were responsible. The accident on Interflug flight 102 was caused by a jammed elevator combined with an operator error by the flight engineer. The remaining accidents have several causes or are unexplained. A few other accidents on the ground (for example the collision of a Boeing 747 with a stationary Il-62 on November 11, 1998 in Anchorage ) or in the air led to the economic total loss of some aircraft, although there were no deaths. 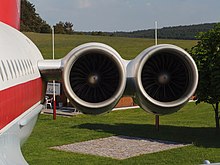 The four engines attached to the stern are characteristic

The abbreviation of the aircraft type Il-62, actually i-el ..., is sometimes misinterpreted, the first two letters as Roman numerals: "two - sixty-two" is pronounced.