The title of this article is ambiguous. For more meanings, see Anchorage (disambiguation) .

Anchorage ([ ˈæŋkərɪdʒ ], English "anchorage") is a city on the Bay of Cook Inlet in the US state of Alaska . With 291,826 inhabitants (according to the last 2010 census), Anchorage is by far the largest city in Alaska and its most important industrial center. Anchorage is the administrative seat of the borough of the same name .

Destroyed by the Good Friday earthquake in 1964

Anchorage was founded in 1915 as the headquarters of the Alaska Railroad . The name of the city comes from the anchorage ("anchorage") on Cook Inlet , where the ships moored to supply the camp. On March 27, 1964, a severe earthquake caused death and extensive property damage. The Good Friday quake is considered to be the most violent seismic activity ever recorded in the United States . Some of the city's few historic buildings fell victim to this earthquake. Today there are functional buildings from industry and trade without historical or architectural value. The City Hospital, built by Frank Lloyd Wright in 1924, is considered the city's most important building . With his spacious, functional Art Deco reception hall, the architect set significant standards for subsequent hospital and nursing home buildings.

The Anchorage Borough was formed on September 13, 1963. 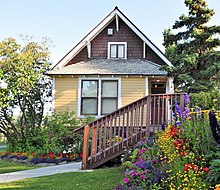 37 structures and sites in the borough are listed on the National Register of Historic Places (NRHP) as of April 15, 2020, including Anchorage City Hall , Oscar Anderson House Museum and Fort Richardson National Cemetery .

Important branches of the economy are the chemical industry , mining , logistics and tourism . Because of its location in an oil producing area, Anchorage is a center of the petrochemical industry. Several large oil companies, such as BP and ConocoPhillips , have branches in Anchorage.

The city has an international airport, Ted Stevens Anchorage International Airport (a major cargo airport), and is on Alaska's main rail link, the Alaska Railroad . The city also has Alaska's most important port, the Port of Anchorage .

Anchorage is also an important military base . The US Armed Forces maintain two military airfields , including the Joint Base Elmendorf-Richardson , and a barracks with a total of around 8,500 soldiers and civilian employees.

Anchorage is home to the University of Alaska (1954) and Alaska Pacific University (1957). The Alaska Center for the Performing Arts is the largest theater in the US state. There are several great museums in Anchorage, including the Alaska Native Heritage Center for the history of the Native Americans and the Alaska Aviation Museum . Outside the city is the ten acre Alaska Zoo .

Anchorage owned a professional ice hockey team, the Alaska Aces , who played in the ECHL until 2017 .