This article describes the city in USA. For more meanings, see Sitka (disambiguation) .

The name Sitka (derived from Sheet'ká, the contraction of the Tlingit name Shee At'iká) means "people from outside Shee" = Sheet'-ká X'áat'l (often simply Shee) is the Tlingit name for Baranof Island. The city is often called "Sitka-by-the-Sea". 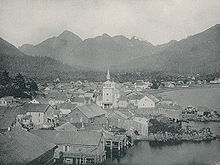 The original settlement area of ​​the city of Sitka is the twenty meter high Noow Tlein (Castle Hill), which is surrounded on three sides by water and whose access from land is difficult due to high tides . It was an excellent strategic position, ideal for a fortress . When Alexander Baranov arrived here on behalf of the Russian-American Society , this place was occupied by the Tlingit . The Russian-American company was a semi-official colonial trading company that received a decree ( ukase ) from Tsar Paul in 1799 , which gave it a monopoly on all future ventures in North America for 20 years .

After negotiations with the Tlingit, Baranow founded the old Sitka, about 10 km north of today's Sitka. He named the settlement Novo-Arkhangelsk / Ново-Архангельск ("New Arkhangelsk "), after the largest city in the region in which he was born. After Baranov returned to Kodiak in 1800 , relations between the Tlingit and the settlers deteriorated. In 1802 a group of Tlingit destroyed the original settlement and killed most of the Russian residents (about 20 Russians and about 130 Aleutians ). Baranov was forced to pay a ransom of 10,000 rubles for the safe withdrawal of the surviving settlers.

Baranov returned to Sitka in 1804 with a large contingent of Russians and Aleutians on board the Russian warship Neva . The Tlingit meanwhile had left the Noow Tlein and built a new fort about a mile to the east, which was better protected from the fire of the ship's cannons. Baranov landed near the Noow Tlein without enemy incidents and occupied it. When the Tlingit opposed Baranov's demands for the permanent settlement of the hill and the position of hostages , he bombed the fort. The Tlingits had to retreat to the surrounding forests. After their victory in the Battle of Sitka in 1804, the Russians built a permanent settlement on the Noow Tlein , which they also called "Novo-Arkhangelsk".

The St. Michael's Cathedral , the main church of the Orthodox Diocese of Alaska and as since June 1962 National Historic Landmark recognized.

In 1808 Sitka became the capital of the Russian possessions in North America and in 1840 the bishopric of the Russian Orthodox Church . As a cathedral church, the St. Michael's Cathedral was built between 1844 and 1848 , which was rebuilt after the fire of 1966 and is now the cathedral church of the Diocese of Alaska of the Orthodox Church in America . Before the fire, it was the oldest church in Alaska. In 1867, the handover of Alaska from Russia to the USA was formally carried out in a ceremony in Sitka . The administrative headquarters of the Department and later District of Alaska was in Sitka until 1906, after which it was relocated to Juneau .

The city ​​of Sitka achieved the status of autonomous self-government in the Greater Sitka District on December 2, 1971. The Sitka Borough was also formed in December 1971. The city is often called "Sitka-by-the-Sea".

21 structures and sites in the borough are listed on the National Register of Historic Places (NRHP) (as of April 25, 2020), eight of them have the status of National Historic Landmarks . These include the American Flag Raising Site , the Russian Bishop's House , the Sitka Naval Operating Base and US Army Coastal Defenses , Sheldon Jackson College and St. Michael's Cathedral

Sitka became famous for the successful Hollywood comedy Self is the Bride , which later takes place in Sitka and the surrounding area.