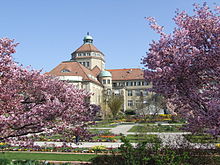 The first and oldest botanical garden in the world, which is still in its original location in Italy , is the Botanical Garden of Padua , in Italian Orto Botanico di Padova . It was founded in 1545 and belongs to the University of Padua . Other early botanical gardens were founded in Pisa by Luca Ghini in 1544, as well as in Florence (1545) and Bologna (1568). Half a century earlier, the first woody botanical garden was created, the Trsteno Arboretum near Dubrovnik . It has been proven since 1492.

Originally, the botanical gardens hosted largely medicinal herbs and were essential basis for the Phytopathological research and teaching, so were medicinal plants gardens . The model was the monastery herb gardens. The first botanical gardens like the one in Padua were also similar in shape and structure to the monastery gardens. Usually the plants in the beds were grouped according to the phytomedical substances they contained. Botanical gardens still offer illustrative material for the study of medicine, phytomedicine and botany as a whole. In the Herba Sana medicinal plant garden, for example, you can see herbaceous plants and shrubs as well as shrubs and trees with pharmacologically active ingredients.

Typical signage in a botanical garden

The botanical gardens, which are mostly attached to botanical university institutes, saw and still see it as their task to actively contribute to the conservation of biological diversity ( biodiversity ) and genetic resources through conservation cultures. In this way, they serve to preserve biodiversity . On the one hand, this happens because the gardens cultivate plants that are classified as endangered in their existence or have died out in their original home. One example is the toromiro ( Sophora toromiro ), a species of the pagoda tree, the only native tree species on Easter Island. The famous Norwegian explorer Thor Heyerdahl saw the last Toromiro in the late 1950s and gathered some fruit. Since then, this species has been considered extinct. In 1988 botanists at the University of Bonn discovered a specimen of the Toromiro in their botanical garden. News of this discovery made waves. Later it turned out that the toromiro also survived in other botanical gardens. As part of a species conservation project, 160 Toromiros were brought to Easter Island from the Botanical Gardens in Gothenburg and Bonn in 1995. Some survived and are now growing back in their original homeland.

In order to obtain plants relatively easily and inexpensively, a free seed exchange has been established between the botanical gardens. The botanical gardens usually compile a catalog of their seed supply, the Index Seminum, every year and exchange the Indices Seminum with one another. This is the most important source for maintaining and expanding your plant collections. Plant material is passed on exclusively for non-commercial use in research, educational work or nature conservation. Over 700 botanical gardens around the world are currently involved in this seed exchange. The oldest catalog dates from 1591 from the Padua Botanical Garden. One of the oldest surviving Indices Seminum from Germany dates back to 1797. It was published by the Botanical Garden of the University of Halle and is in the Secret State Archive of the Prussian Cultural Heritage in Berlin-Dahlem .

After all, botanical gardens with their park-like facilities are used for recreation. This is particularly the case in the extensive arboretums. One of the largest in the world is the Rombergpark Botanical Garden in Dortmund . It is 68 hectares in size.

The largest botanical gardens in the world are (selection, sorted by size):