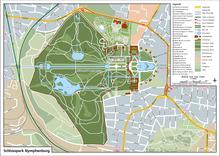 The Munich-Nymphenburg Botanical Garden , also known as the New Botanical Garden , connects to the Nymphenburg Palace Park to the north and, with an area of ​​21.20  hectares and over 350,000 visitors per year, is one of the larger botanical gardens in Germany. Today it belongs to the Bavarian State Natural Science Collections . In May 2014 the Munich Botanical Garden celebrated its 100th anniversary.

In 1812 the first botanical garden was founded in Munich, based on a design by Friedrich Ludwig von Sckell and under the direction of Franz von Paula von Wardrobe . The remains of this complex, now known as the Old Botanical Garden , are located near the busy Karlsplatz in the city center.

As early as 1909, due to urban growth and the associated air pollution, the New Botanical Garden was planned in Nymphenburg just outside Munich's gates and opened in May 1914 after a construction period of only three years, beginning in 1910. Ludwig Ullmann was responsible for building the greenhouses of the new botanical garden, which were built between 1910 and 1912 . With a total area of ​​around 4,500 m², for which Ullmann implemented a transparent and filigree iron-wood-glass architecture, these greenhouses are among the last large plant showhouses that have been built across Europe since the beginning of the 19th century. Together with Ludwig von Stempel , Ullmann also built the main building of the Botanical Garden, at that time the seat of the University's Botanical Institute. Karl von Goebel became the first director of the Nymphenburg Botanical Garden. Later directors were u. a. Otto Renner , Leo Brauner , Hermann Merxmüller from 1966 to 1985 , Franz Schötz from 1985 to 1988 and Jürke Grau from 1991 to 2003 .

“Two attractions are connected with each other,” was how the press praised the newly created access between the Botanical Garden and the Nymphenburg Palace Park in the early summer of 1935.

Since 1966 the New Botanical Garden , the Botanical State Collection located on the same site and the Institute for Systematic Botany of the Ludwig Maximilians University have been managed in personal union. Susanne S. Renner has been director since 2003 .

According to contemporary statements, the new Botanical Garden in Munich-Nymphenburg, which has hardly changed to this day, was the first to be designed in line with the garden reform. The garden quarters around the new buildings and the landscaped western areas in particular exhibited a corresponding simplicity and regularity typical of reforms. These were used to stage special landscape images such as heather or water and marshland as well as an artificial rock landscape made of Pollingen limestone tuff , although the latter was criticized for its shape. A rose garden, useful and medicinal plants departments as well as the "system for the presentation of the most important domestic plants" were also incorporated.

Around 16,000 plant species are cultivated on an area of ​​around 21 hectares in the Botanical Garden. Plants from humid tropical areas, cool tropical mountain forests and deserts have their place in the display collection of the over 4,500 square meter greenhouses.

Further facilities are the jewelry yard , the rhododendron grove , the arboretum and the alpinum on a small lake known as the Großer Teich . Together with its outdoor station, the Alpengarten am Schachen (1,860 meters) in the Wetterstein Mountains, which was founded in 1901, the facility also serves research and teaching.

During the winter months from December to March, exotic butterflies have been held as a special exhibition in a tropical greenhouse for several years. Over 400 different types of butterflies fly freely in the warm greenhouse number 4, which simulates a tropical rainforest.

Every year in July, the Botanical Garden offers a (sales) rose show in and around the large greenhouse.

There is a café in the center of the park by the rose garden.

Visitors can reach the Botanical Garden Munich from the north ( tram ) or from the south via a direct route from the Nymphenburger Park. Admission is charged, in winter only when entering the greenhouses.

In 1956, the Association of the Society of Friends of the Botanical Garden Munich e. V. found .