Heide (outdated also Haide ) is the name for a type of landscape and originally named the land that was not built up by humans, later also an absolutely sterile landscape that could not be reclaimed and was thus a synonym for wilderness . In the narrower sense, biology understands it to be a type of vegetation that is characterized by shrubs or dwarf shrubs with evergreen, hard foliage. Heaths are particularly those that are dominated by the heather family , such as the Atlantic dwarf shrub heaths of north-western Europe, but also the heaths of Australia and the fynbos of South Africa.

In traditional usage, different regional landscape types are referred to as “heath”, sometimes with compound terms such as rock heather or steppe heather (compare, for example, Garchinger Heide , a dry grassland near Munich). In East Germany , it is understood to mean thinned pine forests , more rarely other forests, probably derived from the older meaning of the word . All heathens in Central Europe, off the coast of the sea, historically owe their emergence to the unregulated grazing, in which a hat forest was converted into a more or less tree-free, open area through the browsing of the cattle.

In the narrowest sense of the word, areas that are characterized by predominant heather ( Calluna vulgaris ) on nutrient-poor and acidic soils , often with interspersed juniper , are called “heather” . The name of the heather is already documented in Old High German and shows the longstanding connection of the landscape name with largely undeveloped flat land. Once a year, from summer to autumn, the flowering heather as the main plant transforms the wide, treeless heather of the Atlantic type into a purple-colored carpet.

In its origins, the Old High German word heide (also heyde ) meant "undeveloped land" in contrast to the land around settlements that was reclaimed for gardening or agriculture . This designation was the Allmendeweiden transferred that were shared by all the farmers of the municipality; the forest and pastureland were not separated from each other, the forest was grazed with and thinned out more and more. As a result, heather was more of a legal term than a landscape form; elsewhere one spoke in the same sense of mark , common, community, common , common . Correspondingly, heaths in northern Germany are dwarf shrub meadows , in southern Germany limestone drifts with poor grassland , in the east light pine forests. In the modern era (probably due to the heather and the fame of the Lüneburg Heath), the northern German name prevailed. Regionally there are other names for the heather, for example Palve in the Baltic region.

The total area of ​​all heathland areas in Brandenburg is 12,407 hectares, more than in any other state in the Federal Republic of Germany. Well-known heathland landscapes are the Lüneburg Heath in Lower Saxony , the Colbitz-Letzlinger Heide in Saxony-Anhalt , the Senne in North Rhine-Westphalia , the Ohligser Heide in Solingen (North Rhine-Westphalia) or the Schorfheide in Brandenburg. All the heather areas mentioned belong to the Atlantic heathen type .

There are heaths of the non-Atlantic type mainly in southern Germany. These include the Lechtalheiden near Augsburg and the Fröttmaninger Heide in the north of Munich .

In some parks, heather areas have been laid out, in some cases taking several varieties into account, to illustrate their diversity.

There are three main types of Atlantic pagans:

Originally, heaths were only found in naturally forest-free locations on coasts (dunes), in moors and in the mountains. The typical heathland was created through human management instead of the original forests (usually acidic deciduous forests). This can be seen in the example of the Lüneburg Heath . The pasture and field management on the soils in the north German lowlands shaped the landscape up to the 10th century. However, the vigorous oak and beech forest communities succeeded time and again in colonizing the areas abandoned by humans. The intensive use of the forest stands in the following centuries exhausted the regenerative power of the stands. The forests were cleared through clearing, grazing and fire and the spread of light-loving plant communities was encouraged. Extreme overuse resulted in the formation of drift sands on light soils ( Pleistocene sands and dunes ) . The additional agricultural use by pest management proved to be particularly devastating .

Heidschnucken in the Lüneburg Heath

During the plague chopping , which was practiced until the 19th century as part of the heather farming , the topsoil with the vegetation and the root zone were removed. The pure mineral soil remained. The pests were used as fuel or as litter in stables and mixed with the animals' excrement and spread as fertilizer on the fields. Further nutrients were withdrawn through grazing, especially with heather sheep . The grazing also prevented the growth of larger woody plants or trees and promoted non-bitten woody species (pasture weeds) such as the juniper that is characteristic of heathland landscapes .

Nutrients were exported from the soils used in this way. Precipitation washed out the last remaining nutrients, which were quickly shifted to deeper layers in the permeable soil source material (sands). Specialists such as the heather family (Ericaceae) and heather juniper ( Juniperus communis ) have now settled on these degraded soils , which use strong organic acids to extract the last of the nutrients from the soil. The soil became acidic, in which fewer and fewer bacteria can exist as decomposers. As a result, litter and organic components could be broken down less and less. Below the leaching horizon of these soils, a zone formed in which organic complexing agents ( polyphenols , carboxylic acids , fulvic acids ) with iron , manganese and aluminum precipitate and solidify. On more humid locations under Erikaheiden, the local stone , which is often impenetrable for plant roots, formed in this layer , on drier soils under Callunaheiden local soil.

The barren heaths of northwest Germany with their juniper and heather vegetation are the result of centuries of use by heather farmers. Since artificial fertilizer or excess liquid manure from areas with intensive livestock farming can be brought to heathland economically, this type of use has become uneconomical. A large proportion of the land was converted into arable land. In Germany, livestock keeping on nutrient-poor areas was stopped on a large scale decades ago.

The reduction in the total area of ​​the Heide has been and is stopped by military uses (e.g. Lieberoser Heide , Senne , Osterheide near Schneverdingen , Mehlinger Heide near Kaiserslautern in the Palatinate), which massively hinder the growth of bushes and trees and even for the formation of new ones Heathland contribute. Otherwise, the forestation of heather areas can only be prevented through conscious landscape maintenance (here: heather maintenance) - for example through extensive grazing . 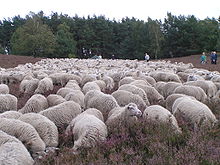 The sheep and cattle breeds adapted to the heather habitat, as well as other animal and plant species in the heather, are threatened with extinction if this habitat disappears. This process would reduce biodiversity . In the interest of conserving endangered species, the disadvantage is that z. B. Heid and Moorschnucken, which are optimally adapted to the heather habitat, produce little milk, meat and wool compared to other sheep breeds, of minor importance. The main task of these animals is the consumption of grass, herbs and leaves of the trees in order to maintain a nutrient-poor biotope, from the existence of which not only they benefit. Sheep keeping on heathland is therefore subsidized with public funds.

Especially in the 19th century, painters, writers and musicians discovered the heather as a landscape and subject. The heath poet Hermann Löns played a central role for the Lüneburg Heath . Eugen Bracht's breakthrough as an artist came in his phase of heather painting.

Nature parks like the Lüneburg Heath play an important role in local recreation. Many visitors have developed an emotional relationship with this type of landscape. The anachronistic character of the landscape from the “ Hermann Löns time” itself and the type of agriculture practiced there are particularly attractive to many tourists. In the cinema, homeland films such as Green is the Heath have addressed this state of mind. The “love of home”, which led to a record number of visitors in German cinemas in the 1950s, is unlikely to be as pronounced today as it was then. Declining numbers of visitors to the Lüneburg Heath speak for this assumption.

The rarity of large-scale heathland makes them a “relic worth protecting”. For many conservationists, it is an open question whether the instrument of nature conservation promotes the development and change of nature or whether a condition of a cultural landscape that city dwellers perceive as beautiful should be preserved. Both variants are compatible with the principle of nature conservation.

The “Framework Concept for the Extension of the Lüneburg Heath Nature Park” describes the monument protection task of regional planners. "Historically grown town centers, heather churches and farmhouses, sheep stables and boulder walls bear witness to the past and shape the image of many communities". Accordingly, sheep stalls must not only be preserved because they are necessary for keeping heather sheep, but also for reasons of monument protection.

Heathland in Steingrund in the Lüneburg Heath near Wilseder Berg

(sorted alphabetically according to authors or editors)