The title of this article is ambiguous. Further meanings are listed under Sander (disambiguation) .

Sander (from Icelandic sandur ), which in southern Germany are also known as gravel plains or gravel areas, are broad, gently sloping alluvial cones that were formed in the run-up to the Scandinavian inland ice or the alpine foreland glaciers during the Ice Age . They generally consist of sand , gravel and / or boulders . The term “the Sander” was coined after the glacial theory was recognized in the late 19th century.

As part of the Glacial Series , they arise when glacial melt streams cut through the terminal moraine and widen in the plains behind as an interwoven river . As a result, the Schmelzbach loses speed considerably and the material it carries with it is deposited as glacifluvial sediment . The very large slope ratio at the terminal moraine (up to 20%) decreases rapidly in the direction of the meltwater runoff. Coarser material is deposited close to the terminal moraine, while finer gravel and sand are still carried far downstream and thus form a characteristic landscape that is reminiscent of a sloping plain. 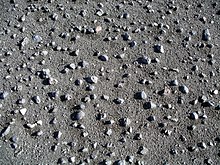 The sander in a schematic representation

Sand or gravel surfaces are very widespread in both the north and south-central European glaciations. They occur in both the old and young moraine landscape . The main differences between the north and the south of Germany are in the composition and grain size.

In northern Central Europe, the sands consist mostly of sand and gravel, most of which is made up of quartz . Hence the sterility of the soils in the sand areas, so that they are now often used as pine forests. Well-known examples are the Zauche south-west of Berlin, the Griese area in the south-west of Mecklenburg, the Lüneburg Heath or the Tucheler Heide in Poland.

In the foothills of the Alps, the gravel surfaces consist mostly of very coarse material (gravel and crushed stone), which also contains a lot of limestone oils from the Northern Limestone Alps . The soils on the gravel areas are quite fertile. The best known is the Munich gravel plain .

Examples from Iceland are the Mýrdalssandur (see Mýrdalsjökull ) or the Skeiðarársandur . Crossing this sand is not entirely safe. A sudden volcanic eruption under the glacier can cause tidal waves, the notorious glacier runs .