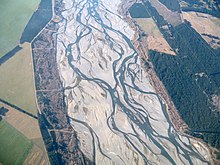 The Waimakariri River in New Zealand

A braided river (English Braided river ; German also verwilderter flow , verzopfter flow , Zopfstrom ) is a special form of a branched flow barrel, in which the flow at low water splits into a network of small channels through small islands ( braid bars British in English aits or eyots ) are separated.

The channels and islands are often highly changeable, as their position changes again and again due to the rapidly advancing sediment deposition , and the course of the river often changes drastically as a result of individual floods. Intertwined rivers are typically found at the exit of high mountains (wide, flat valleys, low slopes, periodically fluctuating amounts of water) as well as in arid (here one speaks of torrents ) and arctic areas, they are often found in alluvial cones and on rump areas.

The branches found in the lowlands on the lower reaches and deltas of the rivers are often referred to as intertwined rivers, but count among the anastomosing rivers because they arise differently.

Anastomosing rivers build up due to the high sediment load and their low gradient and are also known as ramified dam bank rivers . The so-called alluvial fan does not grow evenly in height. Rather, the river sediments in the immediate vicinity and forms the typical bank walls. The latter cause tributaries to flow in parallel for longer stretches before they finally flow either into the river or into the sea parallel to it.

If oxbow lakes and pools lie somewhat lower in the rest of the wide valley and a bank wall breaks (e.g. after floods ), a tributary arises in these deeper areas until these are also filled with sediment. Depending on the height of the embankments, dam bank lakes can also arise, which are often boggy.

The formation of this flow form is promoted by

The water flow is seasonal, for example on the snowmelt, which leads to very different water flow and strong floods.

The individual channels of the river system meander due to their different water velocities: On the impact slope , on the outside of a curve, the river removes material due to the higher flow velocity, on the inside of the curve with its low flow velocity, material is deposited again.

The entire river bed can lie in an area delimited by relatively stable banks or it can occupy the entire valley floor. So who Rakaia River in the region Canterbury in New Zealand , for example, 100 m deep channel in the surrounding plain cut one, which is rather unusual for this valley shape.

The sediments, mostly sand and gravel, are deposited mainly at low tide. The river bed sediments are stratified horizontally and are not sorted according to grain size.

The constant change in the course of the river and the uneven terrain make the bridge construction difficult.

A well-known intertwined river in the United States is the Platte River in Nebraska . The sedimentation of the material from the arid Great Plains is increased here by the presence of the nearby sand hills in the north.

On the vast sandy areas in Iceland there are often intertwined rivers that have emerged from glacial rivers. So over the sander Skeiðarársandur in the southeast of the island with the rivers Skeiðará , Gígjukvísl or Núpsvötn flow some larger intertwined rivers.

In Central Europe, for example, sections of the Lech in Tyrol and the Tagliamento in Friuli should be mentioned.

Many other rivers in Central Europe also show evidence of the existence of intertwined river systems during the Ice Age, which today have been replaced by a meandering system due to the change in climatic conditions, such as the Weser.