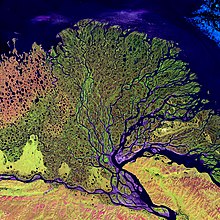 A river delta , also delta estuary or estuary delta , is a river estuary into a lake or a sea , which is characterized by an approximately triangular plan and the fork of the main stream into several estuary arms.

The word Delta originally goes back to the letter Daleth (

, presumably "door") of the Phoenician script . Around the middle of the ninth century BC This was taken over as Delta (Δέλτα) in the Greek alphabet . The Greek historian Herodotus used Delta fourteen times in his histories as a proper geographical name for the Nile Delta , describing the extent of the Nile Delta, but drawing no explicit parallel to the shape of the letter. As Herodotus mentions, the word delta for the mouth of the Nile was already known to the Greeks ( Ionians ).

Only later did the character of the word change and change from a proper name to a technical term for river deltas, now also explicitly with regard to the triangular shape of the letter. The generalization becomes clear in Arrian's historical work Alexandri Anabasis about Alexander the Great at the beginning of the second century AD, where the mouths of the Indus , Danube and Nile are compared and referred to as deltas.

Satellite image of the mouth of the Rapaälv River into Lake Laitaure , Norrbotten Province , Sweden. This estuary is basically a delta, but due to the narrowness of the valley, the lake is too narrow for the characteristic delta shape to fully develop. Instead, the full width of the lake silts up and is transformed into a mosaic of river arms and smaller residual lakes.

A delta estuary occurs when the river's flow velocity is slowed down to practically zero in the area of ​​the river's estuary , so that most of the material that has been carried along until then is deposited as sediment (see →  Hjulström diagram ). At a largely constant sea ​​level , the river shifts its mouth over centuries and millennia by continuously unloading its sediment load further and further out to sea, and the former mouth area silts up . His own deposits increasingly block his way to the sea, so that the main stream forks several times. In this way, the characteristic delta shape is created, as can be seen in maps and satellite images of many river mouths. A prerequisite for the formation of delta estuaries is a low tidal range in the estuary area, as otherwise tidal currents prevent the undisturbed filling of an estuary fan.

The mouth fan can be roughly divided into three areas in cross section, each representing a specific sedimentation phase. At the bottom lie the flat, very fine-grained base layers ( bottomset ) that were originally sedimented in the deep water in front of the delta (hence also called the prodelta ). This is followed by the steeply falling submarine pre- fill layers of the delta ( foreset or submerged delta ) and finally the fluvial sedimented and therefore horizontally stored roof layers of the silting phase ( called topset or emerged delta ).

With a relatively rapid rise in sea level (a few meters per 100 years), it is possible that river deltas will be completely washed over by the sea and covered with marine sediments. Such fossil deltas are known from seismic explorations of the continental shelves . They can provide information about the sea level and the course of the coasts and rivers during the last ice age .