The Niger Delta (or Niger Delta ) is the mouth of the Niger River in Nigeria . The West African river flows into the Gulf of Guinea west of the city of Port Harcourt . The area of ​​the delta is approximately 70,000 km 2 , its width over 200 km. 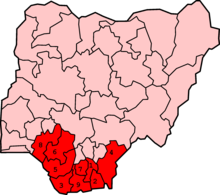 Location of the states of the Niger Delta in Nigeria. The 9 darkened are in the area of ​​the delta.

The Niger River flows for a long time to the north-east and south-west and orientates itself in the general direction south for roughly 500 kilometers. In the estuary delta, the direction of flow lasts from 4 a.m. to 8 a.m.

At the mouth of the Niger, an annual average of around 30,000 m³ of water flows into the South Atlantic every second . The coast of the delta is relatively smooth (no larger coastal tongues) and has the shape of a third of a circle. The Niger Delta is home to the largest mangrove forests on the African continent. They cover an area of ​​approx. 11,134 km² along the coastline and extend far into the hinterland.

The largest and most important city in the Niger Delta is Port Harcourt with over 1.1 million inhabitants. It is the capital of the state of Rivers . The amount of precipitation in Port Harcourt is very high at over 2400 mm.

The Apoi Creek Forest Reserve , Lake Oguta and the Upper Orashi Forest Reserve were added to the list of wetlands of international importance according to the Ramsar Convention in 2008.

The Niger also forms a delta in its central reaches, where it reaches an extensive moorland area in the state of Mali - in a northeastern direction of flow . This inland delta near the city of Mopti and the surrounding landscape is called Massina or Macina.

More than two million barrels of oil are extracted from 5,000 wells in the Niger Delta every day and distributed in 7,000 kilometers of pipelines. The companies involved are Shell , Chevron , ExxonMobil and Total , some of which operate in joint ventures with the Nigerian state.

The environment is enormously polluted by pipelines and oil production , so the mangrove swamps and their inhabitants also suffer .

According to a UNEP study published in August 2011, clean-up of the polluted regions would take up to 30 years and require at least one billion dollars; For the provision of this capital, the UNEP proposes the formation of a fund , which is to be financed by the Nigerian government and the responsible oil companies.

In 2013 the abuses mentioned led to the “nomination” of the delta among the top 10 most contaminated areas on earth by the Blacksmith Institute .

In February 2021, the UK Supreme Court granted residents of the Niger Delta the right to sue Royal Dutch Shell in UK courts for pollution. An appeal court in The Hague, the Netherlands, had already ruled similarly.

The Niger Delta declared itself independent in 1967 under the name Biafra , but was forcibly reintegrated in the Biafra War until 1970.

The oil exploration destroyed important livelihoods (agricultural areas, waters used for fishing) of the population. The rebel group Movement for the Emancipation of the Niger Delta has been fighting for control of the indigenous minorities over the Niger Delta since the beginning of 2006. The largest minority in the Niger Delta is made up of the Ijaw people , many members of the tribe are rebellious and try to defend themselves against their exploitation. Like many other minorities, they successfully hide in the mangrove swamps.

In particular, the Ogoni settlement area in the Niger Delta is hotly contested. In the 1980s, led by the later executed writer Ken Saro-Wiwa , opposition to oil exploration, which was carried out without community involvement or environmental protection, grew. The oil fields in Ogoniland are now partly fallow due to various battles.

In general, the Niger Delta has been hit by sabotage and kidnappings as well as reprisals by the government. Shell withdrew from this area in 2006 due to the conflict in the western part of the Niger Delta .