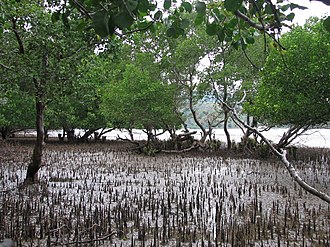 The mangrove ecosystem is formed by forests of salt-tolerant mangrove trees in the tidal range of tropical coasts with water temperatures above 20 ° C. There are around 15 million hectares (150,000 km²) of mangrove forest or mangrove swamp worldwide .

Mangrove forests consist of trees and shrubs of different plant families with a total of almost 70 species that have adapted to the living conditions of the sea coasts and brackish river mouths.

Mangrove forests reach their greatest extent in the area of ​​the estuaries of large rivers in rainy and warm regions. Mangroves are tied to areas of the earth in which their period of activity is not interrupted by cold-induced leaf shedding. 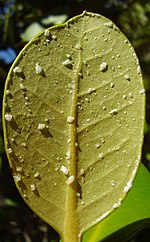 Salt leaks from the leaves

The salty brackish or sea ​​water to which the trees of the mangrove forest are exposed when the tides change, leads to a very low water potential in the sediment that surrounds the roots. Even when water is being absorbed through the roots, mangrove trees exclude some of the salt ions that are normally harmful to plants . The salt that has entered the organism in spite of its selective absorption is stored in the vacuoles of the cells because of its harmful effect on metabolic processes and leads to salt succulence . Certain mangrove tree species can excrete excess salt via the salt glands of the leaves , with others the salt remains in the plant's organism until the leaves are shed.

Further adjustments of the mangrove trees to their location concern the roots . Roots need oxygen for cell respiration , but this is not available in tidal silt soils . In order to ensure that the underground roots are still supplied with oxygen, the root systems of mangrove trees have "ventilation systems": special above-ground root organs ( stilt roots , pneumatophores ) are supplied with atmospheric oxygen via the lenticels of their bark and convey this to the underground root system via air-conducting tissue ( aerenchymes ) further.

The natural rejuvenation is z. In the mangroves of the rhizophore family, for example, they are adapted to the special site characteristics in that seeds within the fruit still germinate on the mother plant and develop floating, cigar-shaped seedlings ( viviparia ) that survive longer drifting with the ocean currents, but quickly take root in favorable locations can form. Other mangrove trees also have well-developed, buoyant fruits or seedlings.

Because of the high amount of energy required to adapt the mangrove plants to the location, these forests often only reach heights of less than 5 meters, and in the optimal range of well over 20 meters. A low, bush-like mangrove develops along arid coasts, on coral islands and on the northern and southern limits of distribution in the subtropics.

Mangroves as a habitat

Due to the extreme tidal conditions, relatively productive communities of highly specialized organisms have developed in mangrove forests. Here marine and land organisms share the same habitat. While terrestrial organisms live on the upper floors of the tree and shrub layer, real sea creatures live between the roots. The roots of the mangrove trees and the sediment that collects between the roots are the habitat and nursery of numerous organisms; Mangroves are important spawning and growth areas for fish, crabs and shrimp , some of which later populate coral reefs or other coastal ecosystems . 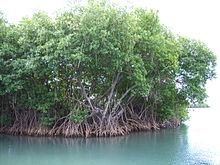 In addition to coral reefs and the tropical rainforests , mangroves are among the most productive ecosystems on earth. Reptiles and mammals live in the tops of the mangrove forest . Many water birds take advantage of the rich food supply and nest in the treetops. The dense root system of the mangroves offers a large number of organisms a large number of tiny habitats in a confined space .

The roots provide a safe habitat for many fish, mussels and crabs, and the larvae and young animals of many species have the best conditions. Snails , algae , oysters , barnacles and sponges live on the wooden roots of the trees . Pistol crabs and fish (for example Sciaenidae ) live in deeper water .

For this reason, many mangrove forests are used by humans in foraging (for example mangrove crabs, mussels); next to this is the significance of the mangroves for fish and shrimp stocks mentioned above.

Another important aspect is that mangroves offer protection against coastal erosion . The destructive effect of storm surge waves and tsunami on human settlements on the coast can be reduced by intact mangrove forests in front of them. Deforestation or other destruction of the mangrove forests is one of the most important cofactors of land loss worldwide, the smaller islands in the tropics are particularly at risk here, where the preservation of mangroves and tourist development are in competition with limited space: For tourism, exposed beaches are much more attractive than inaccessible wetlands . The beach damage often only becomes visible after decades.

Mangrove forests in many parts of the world mainly through investment and expansion intensively managed shrimp farms ( shrimp farms at risk). Because shrimp ponds are severely contaminated with chemicals after only three to ten years, they have to be abandoned after only a few years. A reforestation with mangrove is then almost always impossible.

The yields of coastal fishing fell drastically where large areas of the mangrove forests were cut down. Efforts to reforest mangroves are being made in Vietnam , Thailand , India , Sri Lanka and the Philippines , for example . Despite these efforts, the destruction of mangrove areas continues; the loss in the period 1980 to 2000 amounts to 25% of the area available in 1980.