This article looks at the eggs of animals that lay eggs in water . For additional meanings, see Spawn (disambiguation) .

As spawning are eggs of animals refer to operations where the egg laying in the water takes place. This includes fish and amphibians , but also water snails . 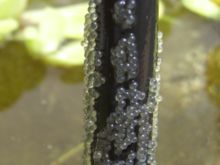 In the case of fish, the female ("Rogner") lays the spawn - which is also known as roe while it is still inside the ovaries - on aquatic plants or on the bottom of the water. Immediately after weaning, the eggs are inseminated by the male (" milkner ") . In contrast to prison spawners , free spawners release their eggs into the open water. Doctor fish , for example, show what is known as a “deep jump”: According to a certain behavior pattern through which males and females synchronize their swimming behavior , they quickly rise several meters upwards. This causes, among other things, an expansion of the swim bladder and thus a higher internal pressure in the fish. This enables eggs and sperm to be expelled more quickly and easily .

Some fish create spawning pits on the bottom, which in large species such as huchen or salmon can be up to two meters wide. During the spawning season, the males of some carp species develop a keratinized skin known as a "spawning rash". 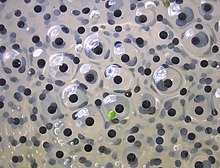 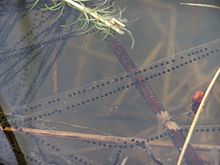 The eggs of amphibians are usually covered by a layer of gel that swells up in the water and are laid in a body of water in various forms by most species. Kill-bearing larvae hatch from the spawn and continue to develop in water until metamorphosis . In the case of the frogs , these are also known as tadpoles .

Real frogs (Ranidae) deposit larger, lumpy spawning balls. While the spawn of the common frog ( Rana temporaria ) often rises to the surface of the water and forms large "patties" there, the spawn of other species usually remains submerged. In addition, common frogs often form large spawning societies from which large-scale “spawning clusters” sometimes result. Tree frogs (Hylidae) like to attach their small, plum-sized spawn balls to aquatic plants . This is also done by the water frogs ( Pelophylax spec. ), Their spawning balls are sometimes very different in size. In Europe, the real frogs have in common that the eggs of species that spawn early in the year are comparatively dark, while those of late-spawning species are relatively light.

Real toads (Bufonidae) stretch long spawning cords between aquatic plants and submerged branches. Each of the two ovaries produces a spawning cord according to the type of one or two rows of eggs, for example, in the toad and the toad several meters long and may contain several thousands of eggs. The natterjack toad often lays its spawning lines directly over the shallow bottom of the water.

Garlic toads ( Pelobates fuscus ) and other toad frogs produce relatively short spawning lines that can be nearly an inch thick. It is anchored under water between vertical structures (plant stalks, etc.). Toads ( Bombina ) lay single eggs or small spawning groups of a maximum of 30 eggs on plants or on the bottom of the water.

In the case of the midwife toads ( Alytes ), the males wind the spawning cords around their hind legs when they mate and carry them around with them until the tadpoles hatch.

The females of newts ( Triturus ) representing the salamanders attach their eggs individually on plants under water on by the females actively fold with the hind legs an "egg bag" and stick to the Eigallerte. In contrast to the frogs, in which the eggs are only inseminated after they have emerged from the cloaca ( amplexus ), fertilization in the newts already takes place inside the body after a complex mating game.