The natterjack toad ( Epidalea calamita , Syn . : Bufo calamita ) is the only species of the genus Epidalea within the toad family (Bufonidae). It is common in Western , Northeastern and Central Europe.

The iris is yellowish green 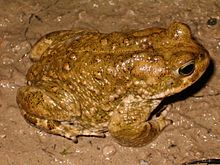 The coloring of the animals can vary greatly. A yellowish topline is usually pronounced - even if only weakly in this male

Typical drawing on the back, here on a young animal

The size of the males ranges from four to seven centimeters, those of the females from five to eight centimeters. The back is marbled brown or olive on a lighter background. The surface of the skin is dry and warty. The large warts and parotids on the back of the head are sometimes reddish in color. As a rule (but not always) there is a thin yellow longitudinal line over their "cross" (the back). The body is compact, the head sloping sharply forward, the muzzle rounded, the pupil horizontally elliptical, the iris lemon-yellow to greenish. The hind legs are especially short for toad conditions, so that natterjack toads rarely hop, but typically move forward crawling like a mouse.

The distribution of the species extends in western, central and northeastern Europe from the Iberian Peninsula over the southern tip of Sweden to the Baltic States and Belarus . In Germany, the natterjack toad occurs in large parts - although it is scattered and unsteady; There are gaps especially in low mountain ranges. In many regions, stocks appear to be in decline.

Gravel pit as a replacement habitat

Distribution area of ​​the natterjack toad in Europe

The preference for very shallow, small bodies of water for laying the spawning lines on the one hand harbors the risk of drying out before the larvae have completed their metamorphosis. On the other hand, such habitats offer the advantage that they warm up very quickly and there are no predators in the water. The loud call of the natterjack toads is adapted to mating in annually changing waters - the partner must not only be lured to the male toad, but also to the corresponding unknown water. Excavation areas, inland dunes , post-mining landscapes , fallow land, construction sites, military training areas, coastal dunes , salt marshes and ruderal areas in human settlement areas are settled. The species is sometimes found even in structurally poor agricultural landscapes, provided that suitable spawning habitats are available. The habitats mentioned are secondary biotopes. The natterjack toad is originally a species of floodplain landscapes, which have become very rare today due to the straightening and containment of rivers and the construction of barrages, in which they find optimal reproductive conditions in open, dry, warm, mostly sandy locations.

At night evocative of males with air-filled fillet Schallblase

Natterjack toad pair in amplexus ; after the nocturnal oviposition, the females leave the spawning area immediately

Puddle of natterjack toad tadpoles in a gravel pit

At spawning time, the males use a large, blue-colored, throat-shaped sound bladder to produce loud mating calls to attract the attention of females willing to reproduce. The series of calls can be rewritten as loud metallic rattling (“arr… arr… arr”). Nocturnal natterjack toad chants can sometimes be heard almost two kilometers away. In Central Europe, the main calling period is April and May. Depending on the weather, an earlier call start (end of March) is possible or there are further call and spawning periods in the summer months - triggered by extensive rain phases. The sounds of the calls can be confused with those of the goat milker .

The one or two-row, pearl-like, one to two meter long spawning cords are laid directly on the bottom of the water in shallow water, without reference to plant stems or other vertical structures. They are not always clearly distinguishable from those of the common toad , which normally spawns earlier and the egg cords are preferably anchored to somewhat deeper water points between stems and submerged branches. The number of black eggs is between 2800 and 4000, with the egg diameter ranging from one to 1.7 millimeters.

The dark, small tadpoles also resemble those of the common toad; From the stage of maturity with hind legs, however, they often have an indistinct, light throat spot. Their length including the oar tail is up to 36 millimeters. With favorable external conditions, natterjack tadpoles need only three to six weeks to metamorphose . The duration of larval development is influenced, among other things, by the water temperature, the food supply, the population density, the competition with other larvae and the threat of drying out of the water. The minimum development time in the field is 17 days, and a maximum of 84 to 100 days.

As pioneering colonizers of arid biotopes with little vegetation and smaller, often sporadic accumulations of water (“ puddles ”), natterjack toads suffer from the lack of suitable spawning waters or from the fact that their habitats are covered with bushes and shaded. However, they are particularly affected by interventions such as the recultivation or conversion of fallow land and former excavation pits. Since the river floodplains in Central Europe are often severely impaired in their hydrological and surface structural dynamics due to straightening and dyke construction, natural habitats for natterjack toads can usually no longer arise there.