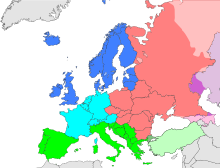 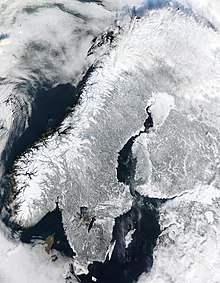 Colloquially in Germany, the term "Northern Europe" mostly refers to the Nordic countries . The affiliation of countries such as Iceland , Norway , Sweden , Denmark and Finland is undisputed .

Further definition of the term

The Baltic states of Estonia , Latvia and Lithuania , the north of European Russia and the northern part of the United Kingdom ( Scotland ) are also often included. If one draws the borders even further, Ireland , Flanders , the Netherlands and the lowlands of northern Germany and Poland could also be seen as part of northern Europe.

In the natural (shaped by the last glacial period ), historical and architectural context, northern Germany is sometimes also viewed as part of northern Europe, for example in various contributions on the North German Broadcasting Corporation .

Politically, Northern Europe can be divided as follows:

Linguistically, these areas belong either to the Germanic , Finno-Ugric , Slavic , Baltic or Celtic families .

Definition of the UN