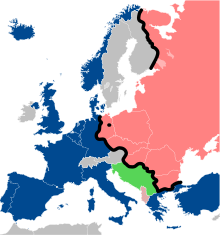 Western Europe at the time of the system confrontation between East (red) and West (blue). Yugoslavia and Albania are marked or hatched as non-aligned countries (green)

The borders of Western Europe were once determined by the power relations during the Cold War . At that time Europe was divided into two halves by the Iron Curtain . A precise distinction between Western and Eastern Europe is difficult to make today or is increasingly being avoided.

In the history of modern times , the term Western Europe includes those countries that had experiences with democracy or constitutional monarchies , the rule of law and nation-state at a relatively early stage , i.e. above all France and the United Kingdom , the Netherlands and Belgium , which emerged in 1830 . Then the term is also used to differentiate it from countries such as Germany , Italy or Spain , in which the (political) characteristics of modernity only became effective much later and autocratic and dictatorial forms of government continued well into the 20th century.

Before the eastward expansion of the EU and NATO , the term was then used for the countries of Europe that were members of the EU and / or NATO, but including Switzerland, which was not a member of either organization. This roughly coincided with the political Western Europe.

In the broadest, political sense, since the eastward expansion of the EU and NATO, Western Europe has included all European countries with the exception of Ukraine and Georgia as well as the CIS members Moldova , Belarus , Russia , Armenia and Azerbaijan . This Western Europe (apart from Andorra , Bosnia and Herzegovina , Finland , Ireland , Liechtenstein , Monaco , North Macedonia , Austria , San Marino , Serbia , Sweden , Switzerland and Vatican City ) is militarily linked to the United States in NATO and economically entirely to the European one Economic Union ( EEC ) aligned (see Western European Union ).

According to the statistical classification of the United Nations , Western Europe includes: Belgium, Germany, France, Liechtenstein, Luxembourg, Monaco, the Netherlands, Austria and Switzerland.