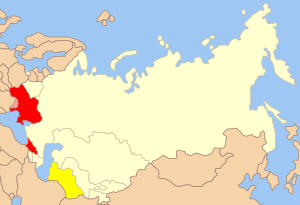 The Commonwealth of Independent States ( CIS ; Russian Содружество Независимых Государств (СНГ) / Sodruschestvo Nesawissimych Gossudarstw (SNG), in Russian usage Sodruschestvo ) is a regional international organization in which various Soviets have come together. It was founded on December 8, 1991 by the heads of state of Russia , Belarus and Ukraine . The seat of the CIS is the Belarusian capital Minsk , the assembly meets in the Tauride Palace inSt. Petersburg .

In European politics, people used to speak of the New Independent States  (NIS). The term CIS is often used to denote the former member states of the Soviet Union (excluding the Baltic states of Lithuania , Latvia , Estonia ). The term Gussen (instead of Russians) was occasionally used in the 1990s for residents of all CIS countries.

The main motivation for the formation of the CIS lay in the efforts of various former republics of the Soviet Union to create a common economic and security area, as the USSR had presented it. The President of Kazakhstan , Nursultan Nazarbayev , particularly criticized the way in which the Soviet Union was dissolved and emphasized the need for cooperation between the former Soviet republics.

The Commonwealth of Independent States (CIS) was founded on December 8, 1991 by an agreement between the heads of state of Russia , Ukraine and Belarus . On December 21, 1991, Azerbaijan , Armenia , Kazakhstan , Kyrgyzstan , Moldova , Tajikistan , Turkmenistan and Uzbekistan, eight other Soviet republics that had recently become independent from the Soviet Union, joined the new community.

In 1993 Georgia joined the CIS (more details here ). Georgia has not participated in the meetings of the CIS Defense Ministers' Council since February 2006. As a result of the armed conflict over South Ossetia , Georgia declared its exit from the CIS on August 14, 2008; this became legally valid on August 18, 2009 due to the deadlines stipulated in the CIS agreements.

Turkmenistan has only been an associate member since August 25, 2005.

At about the same time as Georgia's declaration of withdrawal, the office of the Ukrainian president declared that Ukraine no longer considered itself a member of the CIS because the country had not ratified the CIS statutes, but the president himself has not yet commented on it. However, under the impression of the conflict between Russia and Georgia, members of the governing coalition also formally introduced a bill to terminate CIS membership in the Ukrainian parliament . According to Article 9 of the CIS Statute, resignation is only possible 12 months after its written notification to the depositary of the Statute (Belarus). Officially, however, Ukraine wants to continue to work in the CIS Executive Council for the time being, according to the Ukrainian Foreign Ministry. According to former Foreign Minister Ohrysko, the founding state of Ukraine is a participating state - not a member state.

At the EU summit in Prague on May 7, 2009, the six CIS members Armenia , Azerbaijan , Georgia , Moldova , Ukraine and Belarus signed the Eastern Partnership with the European Union . Russia has protested against this move.

As a result of the Crimean crisis , the Ukrainian Foreign Ministry announced on March 19, 2014 that the presidency of the CIS, which it currently held, would be suspended with immediate effect. On the same day, the National Security and Defense Council of Ukraine decided to completely withdraw Ukraine from the organization. The state broadcaster Voice of Russia announced in October 2014 that Ukraine would remain a member of the CIS. "Kiev did not take any real steps to sever ties with the organization."

In November 2014, a draft resolution on withdrawal from the CIS was submitted to the parliament of Ukraine. The resolution was not discussed by parliament, but remained an open topic, according to a statement by Foreign Minister Klimkin in autumn 2016. In April 2018, Ukrainian President Petro Poroshenko announced again that his country would leave the CIS. He cited the inadequate solidarity of the alliance as a result of the annexation of Crimea as the reason for this. On May 19, 2018, he signed the relevant decree.

Even in 2017, a democratic change of power was the exception, especially in the Central Asian CIS countries. Often, a successor is determined by the predecessor, as in the example of Russia, through the appointment of a prime minister and interim president (Vladimir Putin) in 1999. Another type of change of power is upheavals such as in Kyrgyzstan or Tajikistan. In Kyrgyzstan, however, the winner of the presidential election in 2017 was not known in advance, as it was shortly before in Uzbekistan.

Group photo at the 2008 meeting in Bishkek

In the last few years the CIS has lost importance. Its member states still meet occasionally for consultations, but there have been no summits involving all CIS heads of state for years.

The member states now have different foreign policy orientations and priorities. Parallel alliances and structures such as the Community of Integrated States (GIS), a forerunner of the Eurasian Economic Union founded in 2015 (Bulgaria was also offered to join in 1996), the Collective Security Treaty Organization (CSTO), the Shanghai Cooperation Organization ( SOZ), the GUAM , the BRICS countries , the Eastern Partnership , the Black Sea Economic Cooperation (SMWK) and the Russian-Belarusian Union .

Georgia , Moldova and Ukraine are now economically linked to the European Union via the Deep and Comprehensive Free Trade Area (DCFTA) , whose trade regulations have gradually come into force since September 1, 2014.

1 Excluding Turkmenistan as this is only an associate member.