View over the city in winter

Dushanbe [ duʃambɛ ] ( Tajik / Russian Душанбе , in unofficial Latin script Duşanbe , Persian دوشنبه, DMG Dušanbe , 'Monday') is the capital of Tajikistan and with around 780,000 inhabitants (as of March 2016) also the largest city in the country. It is the political, cultural and economic center of the country and the seat of numerous universities and colleges. Troops from Russia , France and the United States are stationed near Dushanbe .

Dushanbe is located in Central Asia at an altitude of around 800  m in the densely populated Hissar Valley south of the Hissar Mountains . Elsewhere, the mountains reach heights of up to 4643  m . Through the city flows the river Duschanbinka , composed of the two rivers Lutschob Darya and Warsob composed. It is dammed in the Komsomolsk Lake in the city.

Tajikistan is in an earthquake-prone region. Dushanbe is divided into four districts: Ismoili Somoni , Sino , Firdawsi and Schochmansur .

In Dushanbe there is a pronounced continental climate with dry-hot summers and cool-humid winters.

During the riots in Dushanbe in February 1990 , a protester held up a sign that read "Our people for perestroika and democracy"

Archaeological finds suggest that the region dates back to the 5th century BC. Was settled. Dushanbe originated from a place where the weekly market always took place on Mondays ( Persian بازار دوشنبه, DMG Bāzār-i Dušanbe , 'Monday Market '). However, until the beginning of the 20th century, Dushanbe was a small town. 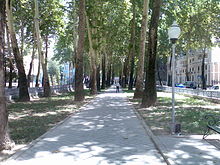 Rudaki Prospect in the center of the city

After the last Emir of Bukhara Said Alim Khan fled the city of Bukhara from the Bolsheviks , he settled in Dushanbe in 1920 and made the city his residence. After four months, under the onslaught of the Bolsheviks, he was forced to leave Dushanbe too.

At the end of 1921, the Basmachi troops under the leadership of Enver Pasha (Ismail Enver) besieged the city. In February 1922 the city was captured by the Basmachi troops. On July 14, 1922, the city was conquered again by the Bolsheviks and then declared the capital of the Tajik Autonomous Soviet Socialist Republic , which was initially an Autonomous Republic within the Uzbek Soviet Republic . In 1929 the independent Tajik Socialist Soviet Republic was created from this , again with Dushanbe as the capital. The Tajik SSR was now officially on an equal footing with the other major republics within the Soviet Union.

From 1929 to 1961, Dushanbe was named Stalinabad (Stalin City) after Josef Stalin , but received its old name back after the de-Stalinization under Nikita Khrushchev .

During the time of the Soviet Union, Dushanbe grew from a small town to a large city and was a rather quiet and multicultural city. During this time, several universities emerged there, a trolleybus network and an airport were built, and the city developed into an important business location.

In the course of the perestroika policy under Mikhail Gorbachev , tensions between the various population groups and nationalist tendencies in Tajikistan, as in many other Soviet republics, increased sharply. Serious civil unrest broke out in Dushanbe in February 1990 against a background of inter-ethnic tensions , in which 22 people were killed and over 560 injured.

In 1991 the Soviet Union finally dissolved, Tajikistan became an independent state and Dushanbe its capital. Immediately after independence, however, the country fell into the five-year Tajik Civil War , as a result of which a large part of the non-Tajik residents left the country. In 1996 Mahmadsaid Ubaidullojew became mayor of the city and held this office until 2017. The civil war ended in 1997 with a peace treaty in Moscow and the opposition participating in the government. The general situation in the country has partially stabilized again since the 2000s.

Dushanbe is now predominantly inhabited by ethnic Tajiks, who made up about 83% of the city's population in 2010. Other significant minorities are the Uzbeks (around 9%) and Russians (around 5%). Until the country gained independence and the subsequent Tajik civil war , Dushanbe was far more multiethnic than it is today. As recently as 1989, the city's population consisted of around 38% Tajiks, 33% Russians, just under 11% Uzbeks, around 4% each of Tatars and Ukrainians, and 2% Jews. In 1959, the proportion of Tajiks in the city was even less than 20 percent. Due in particular to the civil war, there was a massive exodus of non-Tajik population groups across the country in the 1990s.

In a ranking of cities according to their quality of life, Dushanbe took 214th place out of 231 cities worldwide in 2018.

Since it was connected to the railway network in 1929, the city has grown and became the industrial center of Tajikistan. The most important industries today are textile, electrical and food industries as well as mechanical engineering. Due to its position as the capital of the country, the city also has numerous offices, ministries as well as some publishers and television stations.

The 30-meter high monument to the monument of the force as the "father of the nation" Samanidenherrschers Ismail I. (Tajik Исмоил Сомонӣ, Ismoil Somonij) stands on the place of friendship to the city park south in Rudaki Avenue.

In 2011, the highest flagpole in the world at that time was inaugurated in the park in front of the Palace of the Nation. It was supposed to tower above the previously highest flagpole in Azerbaijan (162 meters). The US dollar after government data and 3.5 for external estimates 5 million expensive flagpole was for half of the money transfer companies for the aluminum factory TALCO operating Talco Management Ltd (TML), based on the British Virgin Islands paid. The occasion for its creation was the 20th anniversary of the country's independence after the end of the Soviet Union, which was celebrated at great expense in 2011. The total cost of these independence celebrations is estimated at over $ 210 million.

In the National Archaeological Museum there are many finds from the rich history of the country, including the Buddha of Ajina Tepe , a 14-meter-long reclining Buddha statue that was excavated in the south of the country in 1966 and has been on the first floor of the museum since 2001. The statue is one of the largest Buddha images in Asia , along with the 88 meter high Buddha in Wuxi (China) and a large reclining Buddha in Thailand.

The Gurminj Museum of the country's musical tradition has existed since 1990 .

The Trans-Caspian Railway connects Dushanbe with Tashkent in Uzbekistan and Moscow (4,200 km), whereby passenger trains can only be used to a limited extent. In addition, a new route from Tajikistan via Afghanistan to Iran has been agreed, but the implementation is unclear.

There is also an international airport in Dushanbe . The national airline Tajik Air (Tajikistan Airlines) is primarily of regional importance. The second major Tajik airline is the privately owned Somon Air .

Local passenger transport in Dushanbe is mainly operated by the Dushanbe trolleybus . In addition, there are numerous, mostly privately operated, minibus lines ( Marschrutka ). 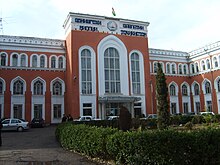 View of the Alai Mountains from Dushanbe