Irkutsk ( Russian Ирку́тск ) is the capital of the Russian Oblast Irkutsk on the only outflow of Lake Baikal , the Angara . It is a university town with 587,891 inhabitants (as of October 14, 2010) and is located on the Trans-Siberian Railway .

Irkutsk emerged from a Cossack fort ( Ostrog ), which was built in 1661 by the Cossack leader Jakow Pochabow on the bank of the Angara River . In 1686 Irkutsk received city rights. The Siberian Tract , the first road connection between Moscow and Irkutsk, was not completed until around 1760 , and the city developed into a hub for trade in the treasures of Siberia and imports from the Chinese Empire : furs , diamonds , gold , silk , Tea , wood . With the trade boom, the city also developed into a remarkable center for science and culture - not least thanks to the large number of political exiles. The city was the starting point for Vitus Bering's first two expeditions in 1728. 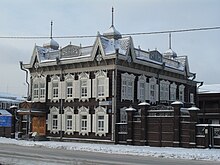 The wooden house of a Decembrist

After the administrative reorganization of Siberia in 1822, Irkutsk became the seat of both a governor general and a local governor .

In 1879 a fire destroyed three quarters of Irkutsk, 4,000 houses. Then the first brick and stone buildings were built there, a theater (built 1894–97), a train station (August 16, 1898 first train); the connection to the electricity supply (1896 electric street lamps) and the telephone network followed. At that time the streets were still unpaved and the sewage flowed in open trenches. Nevertheless, around 1900 the city was the "Paris of Siberia".

On January 14, 1920, the commander-in-chief of the Allied intervention troops in Siberia, Maurice Janin, placed the Russian admiral and military leader of the White Army , Alexander Kolchak , under the "Allied protection" of the Czechoslovak legions . The legions took him to Irkutsk, where the Social Revolutionaries' city ​​council wanted to allow passage in case Kolchak was extradited. Janin, who was already in Vladivostok, approved it. The city council was shortly after the Bolsheviks assumed that Kolchak on 7 February 1920 summarily executed and his body in an ice hole in the Angara sunk.

During the Soviet period the development and industrialization of Siberia was intensified. The Irkutsk reservoir was built near Irkutsk in the 1950s for the operation of a hydropower plant as an important element of the planned development of the Angara- Yenisei region.

The city lost its importance as the political and economic center of Siberia in the course of the 20th century to Novosibirsk . However, Irkutsk is still one of the most important cultural centers of Siberia with its number of different theaters and prestigious museums. Irkutsk is one of the relatively few cities in Siberia in which the merchant buildings built up to the beginning of the 20th century, as well as examples of charming Siberian wooden architecture in the city center, have been preserved across the board. In contrast to cities such as Novosibirsk or Ulan-Ude , Irkutsk, especially in the center, has the character of a naturally grown city with partly winding streets in which the Soviet panel building style has hardly left any traces. But there are also spacious squares and parks. 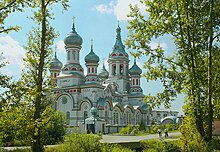 Church of Our Lady of Kazan

The Irkutsk Monastery of the Apparition of Mary was founded in 1683. Such personalities as the Decembrists Pyotr Mukhanov, Nikolai Panov and Vladimir Bestschasnow were buried within the church fence. Next to the grave of Bestzhaznov is the tomb of Ekaterina Trubetskaya with her 3 sons - princess and wife of one of the founders and heads of the secret Northern League of Decembrists Sergei Trubetskoy . She was the first wife to follow her husband, who was sentenced to forced labor, to Siberia at her own request. The grave of Grigori Schelechow , one of the founders of the parent companies of the Russian-American Company, is also located here . He was a merchant, traveler, explorer and navigator, and established the first permanent Russian settlement in Alaska.

The Church of the Savior from 1723 is the oldest monument in the church architecture of Irkutsk. The Cathedral of Christ's Appearance was built in 1723. The Polish Catholic Church houses an organ hall. It stands on the place where the Irkutsk Ostrog was founded. The memorial in honor of the victory of the Soviet people in the Great Patriotic War of 1941–1945 is also located here.

The local history museum was founded in 1782. The side facade is built in the Mauritanian style. The dome served as the first Siberian observatory . The museum has more than 350,000 exhibits. The collection is dedicated to life in Siberia . The museum stock includes weapons and tools of prehistoric man, a large collection of minerals, unique herbaria, bird hides and other animal hides, old handwritten books, reports of geographical and geological expeditions, items of clothing from past centuries and handicrafts.

Irkutsk is home to a universally recognized Decembrist Museum in the former home of one of the leaders of the Decembrists , Sergei Trubetskoy. The houses in which the families of the aristocratic revolutionaries Sergei Trubetskoi and Sergei Volkonsky lived are now also designed as memorials. The exposition contains utensils that belonged to the Decembrists and also restored furniture and musical instruments that were typical of that time.

The museum ship Angara is located in the south of the city on the banks of the Irkutsk reservoir .

In 2000, was Cathedral Immaculate Heart of Mary of 1999 established the Roman Catholic Diocese of Irkutsk consecrated.

The Baikal Economic Forum will be held in Irkutsk to discuss issues relating to the social and economic development of the Russian regions in Siberia and the Far East. On an opinion from the Russian Academy of Sciences in Irkutsk, Putin stopped the first route of the Transneft company and announced that the pipeline would be built at least 40 km from Lake Baikal. The new route of the planned oil pipeline from Eastern Siberia to the Pacific offers the possibility of pumping more oil through the pipeline. This is the opinion expressed by Alexei Varlamov, Russian Deputy Minister for Natural Resources , at the Baikal Economic Forum. Since the new route runs through oil and gas-rich areas in the north and east of Russia, additional oil and gas volumes can be expected, he explained. The first construction route had to be relocated further away from Lake Baikal for environmental reasons . The first line of the oil pipeline is to be built between Taischet and Skovorodino . Its throughput capacity is planned to be 30 million tons per year. At the same time, an oil terminal is to be built in the Russian Pacific region of Primorye . In the second stage, a line is to be laid from Skoworodino to Kosmino with a throughput capacity of 50 million tons, whereby the throughput of the Taischet-Skovorodino pipeline is to increase to 80 million tons.

In Irkutsk there are industrial plants for iron and steel, heavy machinery, aircraft, ship and motor vehicle construction, food, leather, wood, chemical and building materials industries, an aluminum plant and an oil refinery, as well as hydropower plants on the Angara and thermal power plants.

Irkutsk is a traffic junction. In the summer of 1898 the Trans-Siberian Railway reached Irkutsk. However, travelers and wagons had to be reloaded on Lake Baikal onto the two British-built ferries “Baikal” and “Angara”. In the harsh winter of 1904, the railroad workers even laid rails on the frozen lake so that one could drive to Vladivostok . In the autumn of 1905, the Baikal line was officially opened to traffic, creating a continuous train connection between the European part of the Russian Empire and Vladivostok on the Pacific coast . In 1902 the construction of a railway line around Lake Baikal began. With 38 tunnels, 248 bridges and viaducts, the 260 kilometer long Baikal route became the most technically demanding and by far the most expensive section of the Trans-Siberian Railway. The Baikal Railway survived the Russian Civil War , but at the end of the 1950s the old line from Irkutsk to Port Baikal sank in the Angara, which was dammed up by a hydroelectric power station. A new route had to be laid through the mountains to the southern end of Lake Baikal. Today the city is the administrative seat of the East Siberian Regional Directorate of the Russian State Railways . The directorate not only operates all railway lines and the associated infrastructure in the greater Irkutsk area, but also a rail network over 3900 kilometers long.

There are direct flights from Irkutsk Airport . a. to Moscow, Novosibirsk and Yakutsk. On July 9, 2006, the worst accident in the history of the airport occurred. An Airbus A310 of the Russian airline S7 Airlines came off the runway on approach, broke through a concrete wall and burned out completely in an adjacent garage complex. 127 of the 201 passengers were killed. Since this was not the first serious accident at Irkutsk airport, the authorities reacted. Initially only a conversion of the existing airport was discussed - the runway should be extended by 400 meters, the garage complex demolished - the Ministry of Transport now also wants to build a new airport near the East Siberian city. The construction costs alone are estimated at up to USD 1.5 billion (EUR 1.2 billion). On top of that there is about 250 million USD (200 million euros) for building the infrastructure. While the Ministry of Transport bears the costs for the aerodrome (taxiways, signal systems) itself, the area administration and possible private investors are to finance the construction of the terminal and infrastructure. The new airport will be about halfway between Irkutsk and Angarsk . The airport is to be expanded into a hub in the region.

The city is located on the transcontinental road connection from Moscow to Vladivostok . The Russian trunk road R255 , which connects the city with Novosibirsk , ends here , and the R258 begins , which leads to Chita via Ulan-Ude .

The city's public transport is carried out , among other things, by the Irkutsk tram .

There is a monitoring station of the SDKM system on site.

Irkutsk has had partnerships with foreign cities and regions since 1967 .

→ Main article : List of personalities of the city of Irkutsk

The most famous sons and daughters of the city of Irkutsk include the following personalities:

The most popular sport in Irkutsk is bandy , a sport modified from ice hockey and, with the HK Baikal-Energija Irkutsk club, is one of the most successful clubs in the national league . Irkutsk hosted the 2014 World Bandy Championship .

From 1957 to 2008 the football club FK Zvezda Irkutsk existed in the city . His successor was the short-lived FK Baikal Irkutsk , who played their home games in the Lokomotive Stadium and played second-rate for one season . After relegation from the Russian lower house in 2016, the association disbanded. FK Senit Irkutsk , founded in 2001, will play in the Russian third division in 2019/20 .