Almost half of the total Mongolian population, around 1,462,973 people, live in the Mongolian capital.

The capital is the political, economic and cultural center of Mongolia. The city forms an independent administrative unit and does not belong to any aimag (province). The administrative area of ​​Ulaanbaatar is not a contiguous urban area, but with its low population density and the dominant rural settlement structure outside the actual city, it is more comparable to a small province. In addition, the exclaves Bagakhangai and Baganuur are part of the urban area.

The natural history museum, the Süchbaatar monument on the square of the same name, the winter palace of Bogd Khan and the Dsaisan monument , which commemorates the Second World War , are of tourist significance . It is located on a hill south of the city from which you have a nice view. The public library has a unique collection of Sanskrit manuscripts from the 11th century. The Buddhist temple museums and the Gandan Monastery are also worth visiting.

Ulaanbaatar is located at an altitude of 1350 meters on the Tuul River and at the foot of the 2256 meter high mountain Bogd Khan Uul . The administrative area of ​​Ulaanbaatar has an area of ​​4704.4 square kilometers and is therefore about twice the size of the Saarland .

The city was founded in 1639 under the name Örgöö (therefore also known as Urga in Europe until the 20th century ) as the seat of the head of Lamaism in Mongolia, the Jebtsundamba Khutukhtu (also called Bogd Gegen). In the first century and a half it changed its location more than 25 times, and has been in its current location since 1778. It also changed its name several times: from 1706 it was called Ich-Chüree ( Их-Хүрээ ), from 1911 to 1924 it was called Niislel-Chüree , from 1924 finally Ulaanbaatar , which in the Russian spelling Ulan-Bator ( Улан-Батор ) in became known to the world. The reason for the difference is that the Cyrillic script was only introduced 17 years later in Mongolia and by that time a phonetic spelling based on Russian pronunciation had already been established in Russia.

As a result of the signing of the Treaty of Aigun in 1858, the city's economic importance grew from the 1860s onwards due to trade between Russia and China , and it was also the seat of the Chinese Amban . 1911 declared the eighth Bogd Against the Outer Mongolia independent. In the same year the city was renamed Niislel Chüree . China did not recognize the secession , but granted Outer Mongolia certain rights of autonomy with the Treaty of Kyakhta in 1915 .

In 1920/21 troops of the Russian White Army occupied the country and on March 13, 1921 proclaimed an independent monarchy in Niislel Chüree . Shortly thereafter, the Soviet Red Army captured the city ​​and established a puppet government on July 3, 1921 . On July 13, 1924, Outer Mongolia was declared a “ People's Republic ” as the first Soviet satellite regime of its kind . In this context, the city was named Ulaanbaatar (Russian: Ulan Bator; in German: "Red Hero") and was declared the capital of the Mongolian People's Republic on November 26, 1924 .

The collapse of the Soviet Union inevitably led to the collapse of its puppet regime in Ulan Bator. After mass demonstrations in the winter of 1989/90, the communist state party lost more and more control. In March 1990 the entire Politburo resigned, and in May the one-party system was abolished , which marked the beginning of the democratization process and the turn to a market economy. On July 29, 1990, the first free elections took place in a multi-party system. On February 12, 1992, Parliament sealed the end of the communist system with the adoption of a new constitution. At the same time the constituent power renounced the designation People's Republic . This made Ulaanbaatar the capital of the new state of Mongolia .

The Gandan Monastery is the central sanctuary of Mongolia

One of the halls in the Winter Palace of Bogd Khan

Lama in the Gandan Monastery

Ulaanbaatar is a city between modernity and tradition. The center of the city is Süchbaatar Square . The most striking buildings on this spacious square are the Parliament Building , the City Hall , the House of Culture, the State Opera, the Mongolian Stock Exchange and some modern high-rise buildings with hotels, restaurants and shops. In front of the entrance to the parliament building there are large sculptures: in the middle Genghis Khan , right and left his son and successor Ögedei Khan and his grandson Kublai Khan , once Emperor of China.

There are various testimonies of Lamaism in the city , such as the Gandan Monastery , the Winter Palace of Bogd Khan or the Choidschin Lama Temple Museum . The Gandan Monastery is west of the city center. It is the largest monastery in the country and one of the few original monasteries that survived the Stalinist terror in Mongolia . Nevertheless, Soviet troops also destroyed several buildings here and had the 26-meter-high golden statue of the goddess Janraisig ( Sanskrit : Avalokiteshvara ) dismantled and melted down in front of the monastery. Thanks to donations from the Buddhist community of the equivalent of 5 million US dollars , a new gold-plated Janraisig was built after 1990. A new throne chair was built for the Dalai Lama , the actual head of the monastery. 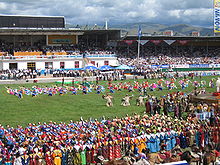 There are numerous museums in the city, the largest of which is the Natural History Museum , with a paleontology section with several dinosaur skeletons. The National Historical Museum is also worth mentioning . It is known for the ethnographic and historical exhibition, which gives an insight into nomadism and the history of the Mongols. The G. Zanabazar Art Museum shows the ancient art of Mongolia. The focus is on the Buddhist works of art by Dsanabadsar . Sculptures, pictures and tankas give an overview of Buddhism in Mongolia.

The Museum of Fine Arts shows classical and modern painting, as well as handicrafts of Mongolia. The Natsagdorsch Museum was built in honor of the most important writer of Mongolia Daschdorschiin Natsagdorsch . In the 1920s, Natsagdordsch was studying in Germany. His early death in 1937 at the age of only 31 is surrounded by many rumors. The museum is located right next to the Choidschin Lama Temple.

The Ulaanbaatar City Museum gives an insight into the history of the city of Ulaanbaatar. The Camel Museum houses 250 exhibits related to the Bactrian camel . The Toy Museum displays popular games and toys from Mongolia. The museum is located in the building of the “Mongolian National Center for Children” on the top floor.

The hunting trophy museum gives a little insight into the animal world of Mongolia. The railway museum is also worth a visit . The Mongolian Theater Museum is famous for its puppet exhibition. The museum is located on the third floor of the Kulturpalast. The Museum of Arts and Creativity of Children shows the creativity of the children and youth of Mongolia. The Mongolian Military Museum was inaugurated on the 50th anniversary of the end of the Second World War. There are exhibits from all periods of Mongolian military history.

The Museum of the Politically Persecuted was established by a daughter of Peldschidiin Genden , a prime minister who was executed in the Soviet Union in the 1930s. It is reminiscent of the Stalinist terror in the 1930s , the number of which is estimated at 35,000 to 36,000 deaths. In total, the research assumes more than 100,000 persecuted people, and the number of victims is very likely significantly higher.

Ulaanbaatar is home to several theaters and theater companies, such as the State Drama Theater, State Opera, Ballet and the Folk Song and Dance Ensemble.

Other important educational institutions are:

In general, the health system in Mongolia is regulated by the state. Every officially employed Mongol pays into compulsory state insurance, medical care is free for all Mongolians. Compared to the West, the health system has a small budget and is supported in many areas from abroad. The Tibetan medicine is widespread in some regions and can at the Buddhist University, and foreigners, are assigned as a subject.

There are also many small hospitals and some private hospitals.

The Veterinary Institute has become an important element of nomadic livestock farming since the 1950s. It studies diseases that have occurred and is constantly developing new vaccines that are distributed to shepherds in nationwide campaigns.

Ulaanbaatar is supplied with coal from nearby areas and is also the industrial center of the country. On the outskirts there are u. a. Power plants.

The Mongolian road and air network is concentrated in the city, and the Trans-Mongolian Railway also runs through Ulaanbaatar. It connects the city with the Trans-Siberian Railway and the Chinese railway network. There are direct trains to Moscow and Beijing. Chinggis Khaan International Airport is located near Bujant-Uchaa, just outside Ulaanbaatar . The airline MIAT operates regular scheduled services from Ulaanbaatar to Berlin , Moscow , Beijing , Hong Kong , Tokyo and Seoul .

The Ulaanbaatar trolleybus and numerous bus routes operate within the city . The urban road network is continuously being improved, but still requires major investments.

As before, families move to the countryside as traditional nomads during the summer months and only live in the city during the cold season.

Ulaanbaatar is divided into nine districts called Düüreg , and these in turn into sub-districts - Choroos .

The city is governed by a council of representatives with 40 members who are each elected for a four-year term.