This article covers the capital of Colorado; for other meanings of the same name, see Denver (disambiguation) .

Denver [ ˈdɛnvɚ ] is the capital and most populous city of the US state Colorado , located at the eastern foot of the Rocky Mountains . Denver was originally a gold rush metropolis. At the 2010 census there were 600,158 residents in Denver. Denver is classified as a (beta) world city and is both a city and a county .

Denver is about a mile above sea level (marking on the 15th level on the west side of the Capitol) and is therefore also called Mile High City . The 105th west longitude passes the city's main train station, Union Station . Denver is the most populous city within a half-mile radius in the Mountain States . In 2016, Denver was recognized as the most liveable place in the United States by US News & World Report.

Because of its location ( 1600  m above sea level), Denver has a continental mountain climate with sometimes strong temperature fluctuations and low rainfall.

In winter it is cold, dry and often sunny. At night temperatures below -10 ° C are not uncommon, at noon they rise to over 0 degrees. Occasionally Denver is affected by cold air inrushes from the north, which bring temperatures below −20 ° C and heavy snowfalls. In summer it gets quite hot in the afternoon with 30 ° C with mostly low humidity . After sunset, the air cools down quickly.

Overall, the city experiences around 400 mm of precipitation per year with a maximum in spring (April / May) and a minimum in winter (January / February).

In 1856 the first Mexican gold diggers came to the area of ​​the Cheyenne Indians . When gold was found on the South Platte River in 1858, the region was looking up. Gold prospectors crowded into the region and a first modest settlement emerged, which was soon abandoned. However, when more gold was discovered a little further south, at the confluence of the South Platte River and Cherry Creek, two new settlements emerged: Auraria (now the university campus) and St. Charles City. A short time later, William H. Larimer founded Denver City, named after a former governor of the Kansas Territory, to which Colorado was then part. In 1861, the residents of the villages united to form a town with 6,000 inhabitants. The common city was called Denver City.

Denver was recognized as a city on November 7, 1861, a few months after the Colorado Territory was established. In 1863 the city was destroyed by a devastating fire and then rebuilt using solid stone. In 1867 Denver became the capital of the territory. In 1870 the various railroad lines came to Denver; so the Denver Pacific and the Kansas Pacific and Colorado Central Railroads , which caused an enormous economic boom. Things continued to improve in 1880 when silver was discovered in the Rocky Mountains. More and more business people settled here and Denver developed into the "Queen City of the Plains". In 1890 the population of Denver had risen to over 100,000.

In 1902, the City and County of Denver became independent and separated from Arapahoe County. After the end of the silver mines at the beginning of the 20th century, a long period of economic decline began. In 1918 Denver was one of the few cities to act swiftly and consistently during the Spanish flu ; which, however, lifted the measures taken on November 11, 1918 due to growing economic pressure. The subsequent second wave of the pandemic hit Denver disproportionately harder. Denver has since been used as a negative example of the consequences of a premature lifting of epidemiological protective measures.

In 1976 the Olympic Winter Games should have been held in Denver, but the then governor Richard Lamm refused because of the high costs and the games were then played in Innsbruck ( Austria ). At the beginning of the 1980s it was again natural resources, this time primarily oil, that initiated a boom. It was the oil that made the city rich and made many construction projects possible. In 1993, the 8th World Youth Day was held in Denver . 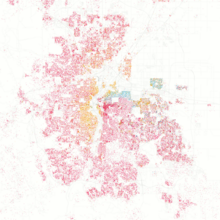 Representation of the ethnic distribution of the population in Denver in 2000. White , Black , Asian , Latino .

The following universities and colleges are within the Denver city limits:

Denver had and still has many successful sports clubs that are also of national importance.

The Denver metropolitan area achieved an economic output of 198.0 billion US dollars in 2016, making it 18th among the metropolitan areas of the United States. The unemployment rate in Denver was 2.3 percent, well below the national average of 3.8 percent (as of March 2018).

Because of its proximity to the Rocky Mountains, Denver has traditionally been home to numerous mining companies. Other important sectors are energy supply and logistics . Denver is also home to a number of telecommunications companies , including Qwest , one of the largest long distance providers in the United States.

Frontier Airlines is headquartered in Denver . Other local companies are the investment company ProLogis , Airwalk , the gold mining company Newmont Mining and the real estate broker network RE / MAX .

In Denver the highways I-25 and I-70 cross . The city's light rail network consists of six lines with 36 stations (the Denver Light Rail ), which is supplemented by numerous bus routes. In May 2019, the largest expansion program in a decade called FasTracks was launched .

In terms of area, Denver International Airport (DEN), which opened in 1995 and is located in the northeast of the city, is the largest airport in the United States and one of the largest in the world. In terms of passenger volume, the airport was the sixth largest in the USA in 2016 with 58,266,515 passengers; He is world order at number 19. Another airport is located on the outskirts of Denver Centennial Airport , a busy airport for general aviation ( general aviation ).

In long- distance rail traffic, Denver is connected to Chicago and Oakland via the Amtrak connection California Zephyr .

Due to liberal legislation in the state of Colorado, the sale of marijuana and THC-containing goods for private consumption , which has been permitted since the beginning of 2014, has become a significant market factor in Denver. However, the marijuana products purchased in Denver cannot be imported into other American states with stricter drug laws with impunity. 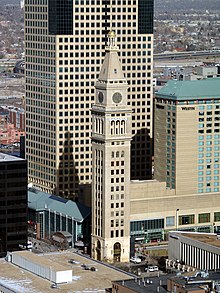 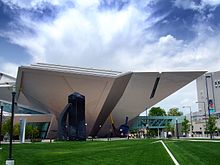 A total of 290 properties and historic districts in Denver are on the National Register of Historic Places (NRHP) as of October 31, 2018. These are located in 48 of the 78 official districts of Denver . 43 entries are in the west of Denver , west of the South Platte River. East of the river, north- east Denver has 67 entries north of Sixth Avenue, and south-east Denver has 41 entries. Added to the 141 entries coming in from the districts of Capitol Hill , Central Business District , Civic Center , Five Points , North Capitol Hill and Union Station existing Downtown . (Five of these entries are in two or three of these regions of the city.)

As a Historic District, the Civic Center has the status of a National Historic Landmark .

→ Main article : List of personalities from the city of Denver

Wikinews: Denver  - on the news

Counties in the US state of Colorado