This article covers the city in the Mexican state of Morelos. For the municipality there see: Municipio Cuernavaca .

Cuernavaca ( Nahuatl : Cuauhnāhuac, "by the trees") is the capital of the state of Morelos and the municipality of Cuernavaca in Mexico . It has 365,168 inhabitants (as of 2010). The city is also called the "city of eternal spring" after Alexander von Humboldt . The reason is the warm and mild climate (average temperature 23 ° C), due to the location (around 1500 meters above sea level) in the Mexican highlands , enclosed in the north by mountain ranges with over 3000 meters above sea level (wooded with oaks, pines and Firs), in the east by the foothills of the Tepozteco at approx. 2000 meters above sea level, in the south by the mountains around Taxco in the Mexican state of Guerrero and in the west by the dry forests above the valleys of Chalma in the state of México. The city itself has a height difference of more than 400 m and is a typical mountain town in the center and in the north with streets that follow the "barrancas" (ravines filled with white water in the rainy season). Only a few bridges connect the individual districts. These gorges themselves are one of the tourist attractions, especially those that have water all year round, producing waterfalls in the outskirts of the city that are more than 30 meters high (e.g. El Salto de San Antón).

From Mexico City it is around 85 kilometers south to Cuernavaca. There are air-conditioned buses departing almost every hour from General Mariano Matamoros Airport ( IATA : CVJ , ICAO : MMCB), also Cuernavaca International Airport. In the city itself "rutas", small buses, run on set routes.

Cuernavaca is still a popular weekend destination today. Many Mexicans have their second home there because of the climate and so you can find beautiful villas or haciendas with large gardens, often surrounded by high walls. Some of these houses are now hotels, restaurants or bars. The best known is the Las Mañanitas restaurant . Hernán Cortés and Emperor Maximilian and his wife Charlotte already spent the summer months in Cuernavaca. The place is also popular with Americans and Germans to spend the winter months.

Notable international institutions include, among others Our Cabaña near Cuernavaca, one of the four world centers of the World Association of Girl Guides and Girl Scouts ( Scouts Center ). There are also many Spanish language schools in Cuernavaca .

The novel Under the Volcano by Malcolm Lowry plays accordingly in a fictional central Mexican town called "Quauhnáhuac", the ancient name of Cuernavaca.

When the Spanish conquistadors came to the country in 1519, Cuernavaca was on the side of the Aztecs . It was only when Hernán Cortés defeated the city in 1521 during his campaign around Lake Texcoco that they changed sides and fought with the Spanish against the Aztecs for the rest of the war.

It has been the seat of a Roman Catholic diocese since 1891 .

The Japanese car manufacturer Nissan has been operating its Civac plant in Cuernavaca since 1966 , where it currently produces the Versa for the United States of America and the Nissan Tiida for Mexico and Central America . The Nissan Tsuru notchback sedan is also manufactured there for the Mexican market. Around 3500 employees work at the Civac plant. 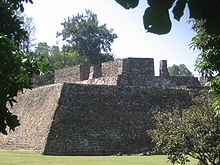 There are some places of interest in Cuernavaca:

Art lovers also get their money's worth here. Among other things there are:

From 1966 to 1976, the Centro Intercultural de Documentación (CIDOC), founded by Ivan Illich , was located in Cuernavaca .

Many ceramics are produced in Cuernavaca, especially in the Colonia 3 de Mayo district, where one shop follows another. In the city center, next to the Palacio de Cortés, there is a handicraft market that sells souvenirs such as ceramics, clothing, bags and jewelry.