A Mexican Municipio is an administrative district in the North American state of Mexico , comparable to a district or municipality in Germany. It is the second highest level of subdivision after the Estado . 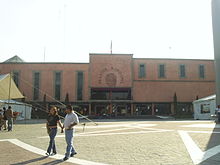 Palacio Municipal des Municipio Ecatepec de Morelos , the most populous of the country with 1,656,107 inhabitants (2010), in the state of México

A municipality is an independent administrative unit, as long as it does not affect national or federal territories. The concept is enshrined in Article 115 of the Mexican Constitution under the name Municipio Libre . Each municipality is presided over by an Ayuntamiento , who is determined in free and secret ballot and whose supreme representative is the Presidente Municipal . He is directly elected and cannot be re-elected in the following legislative period, but can be re-elected at a later date.

A municipality includes at least one, but usually several settlements ( localidades ). If there are several localidades in a municipality, the largest is usually the seat ( Cabecera ) of Ayuntamiento, to which the others send their elected representatives.

The municipality is sovereignly responsible for:

Furthermore, national or federal tasks can be delegated by the responsible government in coordination. Which includes: