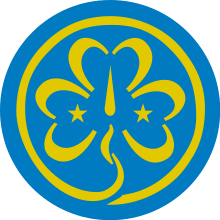 Sign of the World Association of Girl Guides and Girl Scouts

The World Association of Girl Guides and Girl Scouts (WAGGGS) is the World Organization of Scouts . It is the world's largest voluntary organization for girls and young women with almost 10 million members in 146 countries. Girl scout associations from 33 other countries are working towards membership.

The organization was founded in 1928 by Olave Baden-Powell . As a forerunner, the International Council was created in 1919. She has a seat on the world committee of ISGF / AISG ( International Scout and Guide Fellowship ), the world association of ancient scouts. The symbol of the WAGGGS is a clover leaf , which is surrounded by its stem.

The WAGGGS was the female counterpart to the World Organization of the Scout Movement (WOSM).

Member associations in German-speaking countries are:

Map of the WAGGGS regions; in gray-hued countries like Laos and Cuba there are no scout associations

The World Association of Girl Guides and Girl Scouts is divided into five regions in which all member associations of the respective region must work together:

Unlike the World Organization of the Scout Movement, WAGGGS has not set up a separate region for the states on the territory of the former Soviet Union . All previously admitted member associations from this area have joined the Europe Region ; in the Central Asian states, which will probably belong to the Asia-Pacific region , there are no member associations so far.