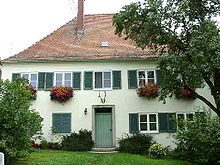 Eduard Fiechtner (* March 5, 1843 in Hürbel ( Biberach district ); † May 22, 1922 in Stuttgart-Untertürkheim ) was the last mayor of the independent community of Untertürkheim from 1879 to 1905 (until it was incorporated into Stuttgart ).

Untertürkheim owes numerous municipal facilities to his commitment as mayor , all of which are still in use today: In 1893 he applied for the construction of a local water supply system . In 1892, the newly built Wilhelmsschule, in 1900 the first municipal power station in Württemberg and in 1903 the most modern wine press in Europe (now the Untertürkheim wine factory ) and finally in 1904 the multi-purpose house with lecture halls, the “women's work school” and distillery were put into operation .

The negotiating skills of the Untertürkheim school, Eduard Fiechtner, with Gottlieb Daimler and Wilhelm Maybach were the decisive factors in 1900 that the Daimler-Motoren-Gesellschaft came to Untertürkheim and not to Schorndorf . Fiechtner guaranteed Daimler a rail connection and electricity from the newly built hydropower plant. On August 15, 1900, representatives of the community and the car company signed the contract for "185,000 square meters of building area in the Gewann Kies".

On October 1st, 1904, the twenty-five year anniversary of Mayor Fiechtner's office was celebrated and he was granted honorary citizenship of the community of Untertürkheim. With the incorporation to Stuttgart on April 1, 1905, he retired.

His grave is in the Untertürkheim cemetery near the funeral hall.