The Daimler-Motoren-Gesellschaft ( DMG ) was a German company in the automotive industry , founded in Württemberg Cannstatt , later with plants in Stuttgart-Untertürkheim and Berlin-Marienfelde . The company's seat was last in Berlin . It was one of the predecessor companies of Daimler-Benz  AG .

Employee of the Daimler-Motoren-Gesellschaft in Cannstatt 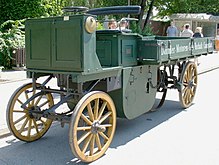 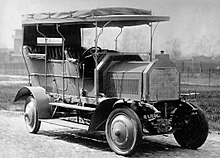 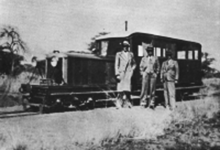 1887 bought Gottlieb Daimler land with factory buildings of the former Vernicklungs institution Zeitler & Missel on the property Ludwigstraße 67 (Kreuznacher today street) in Cannstatt district Seelberg, in November 1890, he founded there with the strong financial partners Max Duttenhofer and Wilhelm Lorenz , the Daimler engine Society (DMG) . From 1893 rail cars were built for Württemberg, Switzerland and Hungary in Cannstatt (see also the illustrated magazine for small and tramways and in 1887 the “Daimler-Wagonnet” exhibition train in the Mercedes-Benz Museum in Stuttgart-Untertürkheim). The first model from December 1893 had 24 + 8 seats and a 14 HP 4 cylinder internal combustion engine .

In 1896 the first truck in the world powered by an internal combustion engine was built by DMG and delivered to Great Britain .

Gottlieb Daimler died in March 1900. In the same year, 185,000 m² of new land was purchased for a new engine factory in Untertürkheim.

On 29 July 1902, took over Daimler-Motoren-Gesellschaft , the motor vehicle and engine factory Berlin AG (MMB) in Marienfelde in Berlin as a branch after 1899 of directors of DMG, based in Marienfelde engine plant Adolf Altmann & Co. for the construction of motor vehicles was used according to the Daimler system. In 1902, DMG registered the name “ Mercedes ” as a patented brand name . In 1903 five rail buses with 16 hp, a speed of 25 km / h and a transport capacity of up to 22 people were built for Great Western Railways .

A major fire in the factory in Cannstatt destroyed all production machines and 93 finished Mercedes vehicles in 1903; As a stopgap, production began early in December 1904 at the Untertürkheim plant. In the following year the complete move from Cannstatt to Untertürkheim took place.

In 1907 DMG designed the "first passenger vehicle with all-wheel drive for everyday use", the so-called Dernburg car , after the Dutch company Spyker had presented the first all-wheel drive automobile with a combustion engine as a two-seater racing car in 1903 with the Spyker 60 HP .

In 1909 the three-pointed star, the company's symbol, was designed by the artist Otto Ewald and made available to Daimler. Which were at the stock exchange in Stuttgart shares of Daimler-Motoren-Gesellschaft in 1911 introduced. In 1912 reported a 115-PS-4-cylinder aircraft engine 50 PS and 75-PS-aircraft engines, a series of 30-240 horsepower balloon engines and 8-cylinder engines for the chute-Lanz - airships in Mannheim.

In order to be able to meet the military's huge demand for vehicles, aircraft engines and airplanes, it was decided in 1914 to build another plant in Sindelfingen , which went into operation in autumn 1915.

In 1922 the company headquarters of DMG was relocated from Untertürkheim to Berlin . The inflation caused the DMG to issue its own emergency money . In 1926 the merger with Benz & Cie. to Daimler-Benz AG .

Timeline of the Daimler and Mercedes models from 1889 to 1926

Assessment of the Daimler engine in 1896

The Brockhaus ' Konversationslexikon praised Daimler's "petroleum motor vehicle" in 1896 beyond all measure and particularly went into the motor itself (with "M." the article means the motor vehicle):

“The main sponsor of the petroleum motor car is Daimler in Cannstatt, which went public in 1885 with the first usable petroleum motor car. The peculiar motor designed for this M. was patented as early as 1883. Since then, public interest in M. has also increased and has recently been expressed in the fact that international races were held with M., for example in Paris in July 1894 (distance Paris – Rouen); in Turin in May 1895 (distance Turin – Asti); in Paris in July 1895 (distance Paris – Bordeaux); Paris from 24 September to 3 October 1896 (distance Paris – Marseille and back). The Daimler designs received the first prizes in all four races. The distance of the last trip (1728 km) was covered in 67 hours 42 minutes. [...] As an example of a petroleum motor car, the latest construction of a Cannstatter petroleum motor carriage is described. What is remarkable about Daimler's M. is above all the engine itself. With it the ignition takes place automatically at a hot spot on the wall, whereby all parts of the otherwise controlled ignition are omitted: therefore the engine is very resistant to vibrations and therefore less in need of repair than that other controlled ignition engines; a greater number of revolutions and thus a more compensatory construction is achieved through compression ignition. As the result of all races shows, these advantages of the Daimler engine have been unsurpassed since then.

The latest type "Phoenix" of this engine still has the remarkable property that the petroleum consumption adapts automatically to the power requirement, whereby the guarantee for a cheap operation is offered. […] The […] speeds are between 5 and 25 km per hour, and gradients of up to 15 percent can be taken. The petroleum supply is sufficient for a journey of 200 km. Preparations for a trip take 1–2 minutes. The cost of a two-seater car with two bez. three-horse engine are 3800 resp. 4200 Mk; a four-seater car with a four-horse engine costs 4600 re. 5000 Mk. A Daimler car needs about ½ kg of petrol (12 to 18 Pf.) Per horse power and hour. The number of M. equipped with the Daimler engine is about 350. " 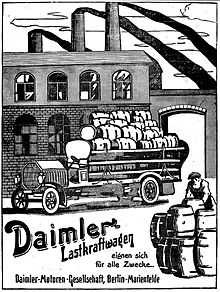 In 1898 DMG took a share in Adolf Altmann's mechanical engineering company in Berlin, which led to the establishment of the Motor vehicle and engine factory in Berlin (MMB). MMB received a license agreement for all DMG patents . In 1899 the MMB moved its headquarters to Berlin-Marienfelde . In addition to combustion engines and motor vehicles, vehicles with battery-electric drives were also manufactured here.

On October 2, 1902, the Daimler-Motoren-Gesellschaft (DMG) took over the ailing motor vehicle and engine factory Berlin AG in Marienfelde. In the beginning, in addition to vehicles for truck and bus bodies, boat and ship engines were also built. During the First World War , the first German A7V tank was developed and manufactured in Marienfelde in 1917/1918 .

The negotiating skills of the mayor Eduard Fiechtner from Untertürkheim with Gottlieb Daimler and Wilhelm Maybach were the decisive factors in 1900 that DMG came to Untertürkheim and not to Schorndorf . Fiechtner guaranteed Daimler a rail connection and electricity from the newly built hydropower plant . On August 15, 1900, representatives of the community and the automotive company signed the purchase agreement for 185,000 square meters of building area in the Untertürkheim district of Gewann Kies.

In mid-1904 to early 1905, the Daimler-Motoren-Gesellschaft moved from the Cannstatter Seelberg to Untertürkheim. On an area of ​​45,000 square meters, a forge, a workers' accommodation and administration building, a shed roof building , the workshop for brake and plumbing work and finally the so-called concrete building for a total of 2,200 employees were built.

In 1914 it was decided to build the third plant in Sindelfingen , which started operations in autumn 1915. The Sindelfingen plant mainly produced aircraft and aircraft engines (see also: Mercedes D III ), and for this purpose the plant had a runway .

Austro-Daimler is the abbreviation for the former Austrian subsidiary of Daimler-Motoren-Gesellschaft in Wiener Neustadt .