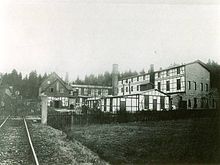 A siding (abbreviated Gla ) in Switzerland siding (abbreviated AnG ) is a rail line to open up a site or building, not even for railway infrastructure heard by railroad tracks for freight transport . Sidings are mainly found at larger factories, industrial plants, logistics centers, transport facilities and military bases. Other - partly outdated - designations are Ethernet port , factory railway , factory port or factory track . If it connects a private facility with the railway, it is also called a private siding .

If, on the other hand, an entire industrial area, a port, etc. developed, there is often an industrial trunk line, from which the individual secondary connections branch off. These main tracks are - in contrast to the main line - mostly in the hands of (mostly municipal) private railways .

A siding can be used if necessary (see demand services such. B. Passing of individual freight cars ) or regularly with cars even or trains on the route. In exceptional cases, special non-public passenger transport for company employees takes place, in this case we speak of service passenger transport .

A junction (short Anst ) is a railway operating point on the open line . A junction is usually a loading track connected to the open line , on which freight wagons can be made available for loading and unloading.

The connecting switch built into the track of the open line is usually set in place . It is set up signal-dependent in the setting area of track diagram interlockings with the help of an external key lock . The key to the connection switch that is in the key lock is fixed and can only be removed once it has been released from the interlocking. The release of the key blocks the setting of routes in the interlocking that lead into the main track. In the control area of mechanical and electromechanical interlockings , the key is located in the interlocking and must be taken with you when driving to the siding. If the switch is not in its basic position (the key is not locked again), the block section is not released for other train journeys.

The track systems within the siding are protected from the tracks on the open line by a safety switch or a track barrier . These devices prevent rail vehicles moving within the connection facility from approaching the tracks of the free route in a dangerous manner. A junction is served by a service trip as a blocking trip , which becomes a shunting trip when driving on the connecting track .

If the connection point is set up in such a way that the block section can be released for another train while a train is in the connection point, it is an alternative connection point ( Awanst for short ). The train in the junction is included . The transmission of information about the occupancy report of the section does not take place here through the train, but through another technical connection between the Awanst and the train registration office.

If the junction or transfer point is locally connected to a stop , this becomes operationally a stop .

A special feature for a German high-speed line is the tongue-free connection of the Erfurt-Vieselbach substation in a track that can be driven at 200 km / h.

In the case of small, seldom used connection points (e.g. a transformer station), this is sometimes designed as a switch-free track connection . The connecting track is brought up to the main track, but a switch is not available or is only partially available as a tongue and frog-free connection . The switch tongues and the frog are missing, the rails of the main line go through. If the junction is to be served, the rails of the main line must be repositioned and then put back again.

An example of this can be found on the S-Bahn line on the Witten / Dortmund – Oberhausen / Duisburg line at the substation in Essen-Eiberg, halfway to Wattenscheid-Höntrop.

The number of main industrial tracks has decreased significantly, as many connections today have switched to truck transport by road or to the nearest junction station by truck. The latter is particularly common in container traffic . Within connecting railways, the wagons are usually moved with shunting locomotives or road- rail vehicles , sometimes with cable winches .

Ludwigseisenbahn with siding to the gas works, 1905 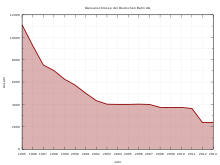 The first siding in Germany was laid on the Ludwig Railway in Nuremberg . Near the Plärrer , it led to the local gas works , where the railroad locomotive pushed the freight wagons loaded with coal.

For the first time on May 23, 1922, valid from July 1, 1922, the Reich Minister of Transport for the Deutsche Reichsbahn issued a uniform Reich General Conditions for Private Siding (PAB).

In the course of the so-called 250 million program , combined transport and siding was promoted in the Federal Republic of Germany between 1969 and 1972. The budget for this part of the so-called Leber Plan was increased to 1.7 billion DM by 1970 due to great demand. Several hundred new sidings had been approved by 1970. They should be completed by 1974.

In Germany , as a saving measure, a large number of sidings were no longer operated by Deutsche Bahn due to insufficient profitability or even completely removed. As a result, their number has decreased by 68.2% since 1994 to 3,732 sidings in 2008 (see Table 1). On the other hand, however, there are still new, sometimes very demanding new construction of sidings, e.g. For example, the new connection to the Warsteiner Brewery , designed for at least 200,000 tonnes per year , for which a total of 5 km of track was created in partly difficult terrain. Where connections have not been completely dismantled, but only the service has been discontinued, private railways, which can provide their services more cheaply than the DB Group, have taken them over.

1 The dates always refer to January 1st.
2 Since January 1, 2012, only those sidings that connect directly to the Deutsche Bahn network have been recorded.

The establishment, reactivation or construction of private sidings are funded in some European countries, including Germany, Austria, Switzerland and Sweden.

In Switzerland, private sidings have been subsidized with funds from the mineral oil tax since 1986 . Up until 2007, an average of around eight million francs was spent on this each year.

In accordance with the Ordinance on Sidings (AnGV), the construction and renewal of sidings is supported. Financial assistance for maintenance, however, is expressly excluded. Such assistance is only granted for sidings with a turnover of at least 12,000 tons or 720 wagons per year.

For this purpose, the company that wants to build and promote a siding must inform the Federal Office of Transport (BAV), among other things, of the estimated annual transport volume or number of wagon loads. The FOT finally issues an assurance ruling which contains the deadline for the start of construction, the contribution rate, the chargeable costs and the maximum amount of financial aid and the estimated transport volume.

Between 40 and 60 percent of the eligible costs are funded. Furthermore, the requirement applies that the funding contribution per year handled tonne for connecting tracks must not exceed CHF 30; for main tracks, the subsidy may not exceed CHF 4,400 per meter of track. The minimum funding is 30,000 francs.

To monitor these requirements competent for the siding announces railway company the BAV annually transported on the tracks transport volume and number of truckloads.

The FOT demands the full financial aid back if a siding is not used within five years after the operating license has been granted or the required minimum transport volume is not reached.

Partial recovery of the grant will be made if the transport volume specified in the guarantee decision is not reached within five years. The financial aid will also be partially reclaimed if the siding is definitely no longer used; For each completed year of operation, the amount claimed is reduced by 5 percent. This means that after 20 years of operation there will be no more claims. In any case, an interest rate of 5% per year from the time of payment will be charged on reclaims.

Austria adopted the Swiss model in 1995. By 2006, the 40 percent of the cost of new or reopened sidings and extensions to existing connections were 30 percent. The minimum funding was 15,500 euros, the maximum between 1.45 and 2.9 million euros.

A special feature of the Austrian model is the promotion of sidings abroad, as long as there is traffic to and from Austria.

In order to promote the recovery in rail freight traffic, sidings in Germany have been subsidized to 50% with federal subsidies since October 7, 2004, if they are expected to actually shift traffic from road to rail. The corresponding funding program of the Federal Ministry of Transport was initially limited to five years.

The construction, reactivation or expansion of private sidings is funded with half of the total costs, but no more than eight euros per tonne and year or 32 euros per thousand tonne-kilometers and year. Funding is tied to minimum quantities. The minimum funding is 15,000 euros.

In 2004, eight million euros were made available for the promotion of private sidings; between 2005 and 2009, 32 million euros per year are available. By the end of 2006, 26 private sidings had been funded with a total of 13 million euros as part of the program. In the process, 3.1 million tons or 760 million ton kilometers per year were shifted from road to rail. This means that around five euros in tax revenue per tonne shifted or EUR 20.39 per thousand tonne-kilometers were used. The unused funds were used to support intermodal transport. By the beginning of 2008, 41 funding applications with a total volume of around 24 million euros had been approved. The funding program started in August 2004 is due to expire in August 2009 (status: April 2008). Up to 2013, around 120 projects had been supported under the funding program.

In 2012, 17 private siding operators received funding of 14.282 million euros under the siding program. As a result, an annual shift in traffic to rail of 1.921 million tons and 0.587 million tonne-kilometers was achieved.

On December 31, 2012, a new funding guideline for new and reactivated siding came into force in Germany. This is intended to make it easier to take advantage of funding. The amount is still based on the annual freight traffic and is up to 8 euros per tonne or (alternatively) 32 euros per 1000 tonne-kilometers. A maximum of 50 percent of the eligible costs are paid as a grant. For a period of five years, it must be proven within a period of ten years that the forecast transport volumes have been achieved.