Replica from 1935 of a passenger car of the third car class of the Ludwig Railroad , the original under the direction of engineer Paul Camille Denis was 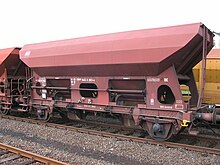 Passenger car of the Rhaetian Railway 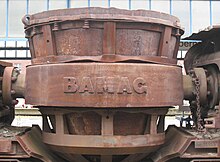 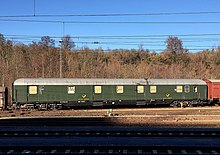 A railway carriage , also known as a wagon or wagon (pronunciation: [ vaˈgɔŋ ] or [ vaˈɡɔ̃ː ], southern German / Austrian [ vaˈgoːn ]; plural: Waggons, southern German / Austrian also known as wagons, wagons [ vaˈgoːnə ]), is a rail vehicle without its own drive . A distinction is made between freight wagons , which are used to transport economic goods, and passenger wagons , whose task it is to transport people. In Germany, passenger coaches and freight cars are standard vehicles . The railway company cars are also counted among the railway wagons , which in turn are not necessarily included in the regular vehicles. For many secondary and local railways as well as small railways , passenger cars used to be called sidecars , analogous to trams .

The following assemblies are common to all railway cars:

The transport of railway wagons on the road is possible with road scooters , which were developed in 1931 by Johann Culemeyer . Carriages of one gauge can be transported on rails of another gauge by means of trolleys or trolleys .

In Germany in 2003 the following vehicles were in the inventory of Deutsche Bahn AG and other railway companies :