Structure of a wheel set 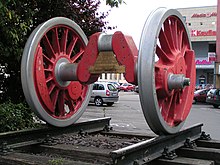 Treibradsatz a three-cylinder steam engine of the series 44 with bolster axis serving as a driving pin for the inner cylinder.

A wheelset in rail vehicles consists of the wheelset shaft , the two wheels and the wheelset bearings . Depending on the design, brake discs , drive gears and earth brushes are also mounted on the wheelset shaft. The wheelsets transfer the weight and dynamic loads of the vehicle to the rails , guide the vehicle on the track and transfer the vehicle's drive and braking forces to the rails. A wheel that has a drive that is Treibradsatz called a drive-less wheel than wheelset . In locomotives with rod drive , the designation drive wheel set is only used for the wheel set on whose crankpins the drive rods act directly; the other wheel sets driven by (additional) coupling rods are referred to as coupled wheel sets .

As a rule, the two wheels have conical running surfaces and are rigidly connected to the wheelset shaft (by longitudinal pressing) to form a unit. This combination causes the sinusoidal motion , which keeps the vehicle in the lane, but tends to instability at high speeds. Only in a few exceptional cases are the wheel disks not firmly connected to the wheelset shaft. In the case of gauge change wheel sets with adjustable track width , the wheel disks can be moved on the wheel set shaft, but they are prevented from twisting against each other.

Visible keys or wedges, which are present in steam locomotives with driving and coupled wheel sets at the fit of the wheelset shaft, are only used for guiding when pressing on, so that the crank pins of the two wheels are at a defined angle to one another after assembly, which is determined by the functioning of the engine .

Idler drives have only recently been developed; because of the lack of a positive connection between the wheels of the gear set pair, they do not lead to sine or wave running. They are used u. a. with Talgo articulated trains (as single-wheel single chassis) and with various tram vehicles, here mainly because of the possibility of low-floor construction due to the non-existent wheelset shaft and the positive curve running properties even with small radii. The disadvantage here is the lack of self-centering in the track, even small dimensional deviations lead to a wheel running against the rail head and thus to higher wheel flange and rail side wear.

Depending on whether the two wheelset bearings are inside or outside the wheel disks, one speaks of internal or external bearings.

The wheelset bearings are usually located outside the solid wheels (external bearings) on the shaft thighs. Wagon wheel sets (for goods traffic) are usually standardized and freely exchangeable. In addition to the running circle diameter, the standardization also affects the dimensions of the axle bearings and the brake discs that may be present. The distance between the center of the axle bearings is related to the track width. In the European standard gauge network, this dimension was increased to 2000 millimeters after the Second World War from 1955. In the case of wagons for the Russian broad gauge , this dimension is 2035 millimeters. For the transition between the two gauges by exchanging wheelsets, there are gauge wheel sets with the axle bearing center distance that matches the respective vehicle and the other track width. In other cases, for example for the transition to the Iberian broad gauge, the running gear and the axle shafts must comply with the standards of the wider gauge. In the past, narrow-gauge wagons in particular were often supplied by the industry with a uniform base frame, often with meter or cape gauge dimensions, and only wheel sets and braking equipment adapted to the customer’s track width.

Among other things, in passenger cars in America, tram and metro multiple units and locomotives, especially with rod drives , they can also be located between the wheels (internal bearings), which results in a more favorable flow of forces due to the smaller cantilever width. The installation location between the wheels, however, requires divisible bearings, since the bearings can only be attached after the wheel has been pressed on or should be exchangeable without removing the wheel. Another possibility is in particular roller bearings, the service life of which corresponds to that of the entire wheel set. The driving wheel sets of steam locomotives are usually stored inside , since the driving and coupling rods are arranged outside in front of the wheel plane for good accessibility. Other locomotives also have additional elements attached to the wheel set, such as pins on the wheels, a cranked axle shaft in steam locomotives or additional shaft seats for the large wheel of the drive in electric locomotives, as well as drive and brake gears in cogwheel vehicles .

Modern vehicles that are equipped with disc brakes instead of brake blocks that act directly on the wheel treads have additional brake discs. These are either attached to the wheel disks or on their own seats on the wheelset shaft.

For distance and speed measurement , traction control , wheel slide protection and, if necessary, other systems, the rotation of the wheelset is recorded by sensors. For this purpose, position pulse generators are often located outside the axle bearings.

The wheelset is subject to high levels of stress in operation. The wheelset shaft is mainly subjected to bending stresses due to the existing dynamic loads (e.g. pitching movement of the vehicle) and the weight of the vehicle . In addition, the wheelset shaft is also loaded by longitudinal and shear forces. But due to the insignificance of the longitudinal and shear loads, these are neglected in the design. The torsional load on the wheelset shaft is a special case. This load is currently being investigated more closely, as new findings indicate that oscillation phenomena can occur, the constructive consideration of which has yet to be finally worked out.

For this reason, the wheelset shaft and wheel disc must be measured regularly and checked for cracks. Today, crack testing is carried out with an ultrasonic test , eddy current test or magnetic particle test . In the past only visual inspections could be carried out. Steam locomotives therefore had red wheels, the color of which made cracks easier to see. The wheel disks of freight wagons are struck with a hammer for testing. The presence of cracks can be concluded from the rebound of the hammer and the sound of the wheel disc. The running surfaces are machined; when the so-called operating limit is reached, wheel tires or wheel disks are replaced.

In order to pass the driving tests required for the approval of new rail vehicles and to prove driving safety, one or more wheelsets of the vehicles concerned are exchanged for wheelsets of the same type equipped with measurement technology. Several strain gauges and electronic components for data transmission are attached to the wheel disks in the shaft. The transmission of the measurement signals from the rotating wheel sets to the vehicle takes place by means of slip rings, optically or with telemetry . By evaluating the signals, the contact and lateral forces acting on the wheel can be determined at any time. B. the load on the superstructure and driving safety can be determined.