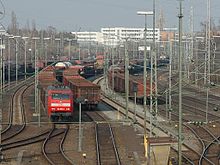 Diversity of freight wagons in the Kornwestheim marshalling yard

Freight wagons , including freight cars or colloquially freight cars are railroad cars that the transportation of goods used. 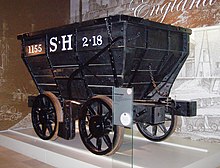 Coal wagon from 1829 of the English coal mine in South Hetton, oldest surviving railway vehicle outside of Great Britain in the Nuremberg Transport Museum

At the beginning of the railway age, two-axle freight cars of a simple design were initially used almost exclusively. Covered goods wagons (also called covered ones at that time), open wagons with side walls and flat wagons (with and without stanchions ) were used almost exclusively . The initially simple vehicles have been increasingly developed further in the course of time for the respective load and for the loading and unloading equipment.

Special wagons for limited use, special goods or with special properties were discontinued as so-called private goods wagons as early as 1850. This includes almost all tank wagons and many refrigerator wagons . So-called car rental companies stopped many of these cars and rented them out to the companies using them.

The first agreements on the mutual use of freight wagons between the private and state railways were made quite early on ; around 1850, the Association of German Railway Administrations established regulations for the standardization of dimensions and facilities. The establishment of the Prussian state cart Association (1881) favored the formation of using uniform standard parts assembled car types. There were similar developments in other countries, decades before international standardization. A milestone in German freight transport was the formation of the German State Car Association in 1909, with uniform car types and car addresses . With the participation of all German state railways, a joint fleet of wagons was created, which at the end of 1911 comprised around 560,000 freight wagons.

Since the founding of the Association of Private Freight Car Customers (VPI) in 1921, the interests of the private transport industry, especially wagon rental companies, freight wagon construction and maintenance companies and owners of private sidings, have been represented in a bundle. The association now has around 100 members who own 50,000 freight wagons and transported 361 million tons of goods in 2007.

While freight trains were still traveling at a speed of around 30 km / h in the early days, it was not until the introduction of the main air line- controlled brake that enabled a higher speed of 65 km / h from the 1920s. Modern freight wagons are approved for top speeds of up to 140 km / h, have more powerful brakes with gray cast iron and composite brake blocks and are increasingly equipped with GPS receivers and transponders for position monitoring if necessary. At Deutsche Bahn (DB) there were copies for high-speed traffic up to 160 km / h. However, since the braking distance of these fast freight trains was longer than the usual distance from the distant signal , trains were only allowed to run at this high speed on routes with early driver's cab signaling ( LZB ). The freight wagons used for this had disc brakes, a continuous main air reservoir line and UIC control lines for the use of the electropneumatic brake.

The specific development history of German freight wagons can be found in the articles: 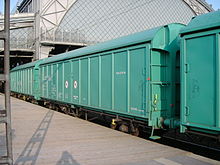 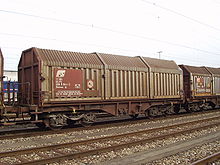 The freight wagons are classified by the International Union of Railways (UIC) according to their main structural features as follows:

The guidelines of the UIC were sometimes interpreted differently by the railway administrations, so that it could happen that almost the same wagons were assigned to different classes. Occasionally, wagons also had to be rearranged through minor modifications. For example, an e-car becomes an F-car by welding a door shut.

Freight wagons for special purposes - but none of the above. Types of construction can be clearly assigned - are:

Rail mail wagons do not count as freight wagons, but as passenger trains or they form their own mail trains.

German freight wagons were divided into the following groups from 1922 to 1968:

Swiss freight wagons were divided into the following categories until 1968:

To differentiate between different series of the same basic type (open car, etc.), superscript numbers or letters were used. The digits related to different loading weights, the letters to the usability.

To distinguish between different series of the same basic type (open car, etc.), superscript numbers and letters were used, e.g. B. L 2 , K 3 or S kt . The numbers for the substructure types, the letters for brake equipment that deviates from the standard (or t for bottom scrapers).

The number of freight wagons surpassed and exceeds that of passenger wagons many times over. The declining number of items does not always automatically indicate a lower transport performance, as the average loading volume and the permissible loading weights have constantly increased. The emergence of standardized ISO containers ensured that fewer wagons are required to move freight because the changing containers always have longer idle times away from the railways.