A transponder is a radio communication device that receives incoming signals and automatically replies or forwards them. The term transponder is a briefcase word from the terms transmitter and responder .

Under passive transponders are systems that the internal communication and the execution processes needed energy exclusively from the field refer to the transmitter / receiver unit. Passive transponders do not need their own power supply, but can only work over short distances.

The best known design is the radio frequency identification RFID . Typical applications: identification of objects, pet registration chips or chip cards and fobs for an access control system. An active sensor (in connection with the computer) reads and decodes the data sent by the passive transponder.

Active systems have their own energy supply. They either have a built-in battery or are connected to an external power supply. This not only enables greater communication ranges, it also enables the management of larger data memories and the operation of integrated sensors . Simple active transponders are used, for example, to identify aircraft : The transponder built into the aircraft receives a coded signal from a monitoring and control point and responds to this signal on a specified frequency . This response signal is received by the monitoring station and displayed together with the radar echo .

In addition to the pure forms of passive or active systems, there are semi-active transponders.

Communication satellites use transponders that re-radiate the signal received on the uplink frequency on another frequency (the downlink frequency). 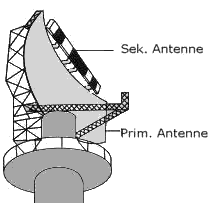 The radio transponder (TPX or XPDR) is a secondary radar transponder used to identify aircraft. This is done using the so-called transponder code , also known as a squawk , a four-digit octal code that the pilot sets on the transponder when requested by the airspace surveillance . Transponders have different operating modes:

Since 2008, only transponders capable of operating mode S may be flown into airspaces in Germany that require transponders. Outside of these airspaces there is no transponder requirement for VFR flights up to an altitude of 5000 ft. However, if an aircraft has an operational SSR transponder, it must be operated during the entire flight in accordance with SERA 13001.

Squawk ident : By pressing the Ident button, an additional pulse from the SPI (Special Position Identification) is sent for approx. 20 seconds. This is used to clearly identify the aircraft on the air traffic control display device.

In terms of their functionality, the labels of an article surveillance system usually resemble that of a coil that detunes a resonant circuit at a passage, or that of a complex passive RFID transponder that can be read out interactively or automatically. The amount of information in the retransmission of a transponder to the interrogation station varies, depending on the type, from 1 bit to full product identification.

A locking system based on the secondary radar process replaces mechanical locking cylinders . A small transponder instead of the conventional key unlocks doors and lockers at the push of a button. The system manages any number of locks and users and also offers special monitoring functions such as time-dependent access and logging of presence. If a transponder key is lost, it is simply blocked. In contrast to mechanical locking systems, it is therefore not necessary to replace all locks in order to prevent misuse of the lost key.

Radio key in the car

Fixed active transponders in the safety technology of the railroad are called balises (French beacons). These beacons describe a fixed safety technology in the ETCS concept and in the ERTMS concept, technologically in the transition between the purely fixed track safety and the tensile driving safety .

Mobile active transponders have so far not been used in railway safety technology. Such solutions are only expected with the separation of route protection (entry protection) and vehicle protection (train separation).

These passive transponders the size of a credit card ( ISO 7810 ) are mostly used for personal identification. The areas of application are in access control systems , time recording systems, but also for billing services and goods purchases ( fuel dispenser , toll systems, passenger transport, coffee machines, factory kitchens, ...). The advantages compared to the use of a magnetic stripe card are the ease of use, the resistance of the card to mechanical wear and the possibility of being able to store data on the card. The latter also enables use as a prepaid medium, i.e. H. the card is loaded with a credit and each time the card is used, this credit is deducted.

Transponder for people with dementia

Transponders are increasingly being used by people with dementia or other patients, for example in nursing homes and hospital wards, to prevent people from escaping the facility. When walking through a marked exit, the staff is alerted. With the transponder, it is possible to prevent dementia sufferers from having to be restricted in their range of motion. The devices can be equipped with GPS so that it is possible to locate the person. If it is a "custodial measure", the supervisory court must approve the measure.

For animal identification , transponders are increasingly being implanted in the animal using a special injector and an injection cannula. The transponders are encapsulated in a bioglass cover and grown together with the tissue of the animals. The labeling is required by law in some European countries. More detailed description under animal registration .

In addition to transponders on collars in the milk production used to order at force feeding stations to allow an individual allocation and also to monitor animal activity. Animal identification in a herd management program and also in milking robots is also carried out using transponders.

In general, the transponder can be used to automatically identify people. This is used at mass sports events such as triathlons or marathons to identify the participants during the competition and to record their times. One of the first systems is IPTAtime .

Transponders are also used in automated warehouses by marking the storage items with an RFID chip. This allows the stored things to be identified automatically.

Applications with 13.56 MHz in a metallic environment

In order to be able to use RFID transponders in metallic objects, the electrical parameters are adapted to the respective working environment. The antenna of the transponder is wound, so to speak pre-detuned, in accordance with the frequency shift to be expected in the respective metal. The ferrite core is used to bundle and align the electromagnetic field . To increase the read / write range when used in metallic objects, it is helpful to reduce the eddy current effects by making a slot. The resonance shift depends u. a. on the hole diameter and the introduction of a slot and is taken into account in the production of the transponder.

Applications of a transponder according to ISO standard 15693 with a frequency of 13.56 MHz. The structure is based on a ferrite core , which serves as a winding body for the antenna coil and at the same time as a carrier for the RFID chip.

Transponders are also used in waste disposal . B. used to record the emptied garbage cans and the assignment to their owners.