A battery is a store for electrical energy on an electrochemical basis. Batteries that can be recharged, battery , short battery or secondary battery called. Non-rechargeable batteries are called primary batteries, or just batteries .

The term " battery " is taken from the military language, where it means a combination of several guns , analogously, an interconnection of several galvanic cells was assigned this term. From the second half of the 20th century, the use of the term “battery” extended to individual primary or secondary cells, whereby the term “accumulator cell” or “accumulator” for short is used for the latter. The change in linguistic usage described was reflected in the DIN standard 40729 accumulators; Galvanic secondary elements; Basic terms addressed, which under battery meant “always several connected cells”, although this terminology has become blurred in the everyday “distinction”.

In 1780, the Italian doctor Luigi Galvani noticed that a frog's leg that came in contact with copper and iron kept twitching, and thought it was an electrical effect. The first functioning galvanic element and thus the first battery was invented by Alessandro Volta in the form of the Voltaic column in 1800 . This was followed in the following years design improvements such as the trough battery of William Cruickshank , which avoided the drawback of the vertical structure of the voltaic pile. Historically, a distinction is made between dry batteries - with solid or gel-like electrolyte - and wet batteries - with liquid electrolyte - which are no longer in use today.

The historical wet batteries, which can only be operated in certain positions, include the Daniell element by John Frederic Daniell from 1836 and the different variations and designs in the form of the Gravity Daniell elements , the chromic acid element by Johann Christian Poggendorff from 1842, the Grove element by William Grove from 1844 and the Leclanché element by Georges Leclanché from 1866. These galvanic wet cells were primarily used to power the wired telegraph stations . Over several development steps, the Leclanché element resulted in the still common and position-independent dry batteries, the first work on this came from Carl Gassner , who patented the dry battery in 1887. In 1901, Paul Schmidt first used dry batteries in flashlights in Berlin .

Ancient vessel arrangements interpreted as batteries such as the “ Baghdad battery ” could have generated an electrical voltage of around 0.8 V through the interaction of copper , iron and acid . Whether these vessels were used as batteries in today's sense at the time around 2,000 years ago is controversial and could not be proven beyond doubt.

An electric cell is an electrochemical energy storage and an energy converter . During the discharge, stored chemical energy is converted into electrical energy by the electrochemical redox reaction . This can be used by an electrical consumer that is independent of the power grid . Alternatively, it can also be used in a consumer that is dependent on the power grid to bridge brief power failures and thus ensure an uninterruptible power supply .

Primary cells can only be discharged once and cannot be recharged. In these cells, the reactions are partially reversible during discharge, but this does not lead to the restoration of an energy content similar to the new state. On the other hand, the rechargeable secondary batteries ( accumulators ) have to be brought to a state of charge similar to the new state, so that a multiple conversion of chemical into electrical energy and back is possible.

The electrode materials determine the nominal voltage of the cell, the amount of materials the energy contained .

Important terms relating to the electrical properties of a battery cell are:

capacity
The electrical charge stored in a galvanic cell is called capacitance , which should not be confused with electrical capacitance . The capacity of a battery is given in terms of the electrical charge in ampere-hours ( unit symbol : Ah), or more rarely in ampere-seconds (As) or coulombs (C; 1 As corresponds to 1 C).
power
The performance of a battery / battery cell is the amount of electrical energy that can be drawn per unit of time. It is usually given in watts (W). It is the product of the discharge current and discharge voltage or the quotient of energy and time . The energy is the opportunity to work ; it is given in joules (J).
Energy content
The energy stored in a battery ( electrical work ) is not always specified, but the energy per mass or per volume is a typical parameter of battery systems and is often listed in the manufacturer's data sheets. An assessment of the type is provided by diagrams of comparative energy data (see diagram). The physical unit is the watt second . The specific energy unit is Ws / m³ or Ws / kg (corresponds to J / m³ or J / kg).
Self-discharge
All galvanic cells are subject to self-discharge during storage . The speed of self-discharge depends, among other things, on the type of battery and the temperature. The lower the storage temperature, the lower the self-discharge.

The weakest cell determines the quality of a battery. When connected in parallel , compensating currents lead to greater losses if the cell with a lower capacity is discharged earlier. In series the voltage drops under load together rather because stronger, more charged cell current drive by weaker, already discharged cells where then drops already some of the tension. According to Ohm's law, their increased internal resistance leads to cell heating without the electrical energy being usable.

Depending on the area of ​​application, there are the following terms and assignments:

Due to the diverse areas of application with very different requirements in terms of voltage, power and capacity, there are now many types of batteries. These are differentiated, for example

Commercially available batteries and cells differ both in their electrical values ​​and in their geometrical or structural shape. Several of the terms listed below can together describe a cell type, e.g. B. "Alkali-Manganese-Cell - LR 6 / AM-3 - AA - Mignon". Often, however, only a certain characteristic is required, e.g. B. the size "AA" for a specially designed flashlight.

According to chemical composition

In the experimental area and to illustrate the functional principle, quite exotic galvanic cells, such as lemon cells, are used.

Circuit symbol of a galvanic cell (primary cell or accumulator)

Galvanic cells that cannot be recharged after discharging are called primary cells or primary elements. The different types are named according to the materials used (with the exception of rechargeable alkaline cells - these are still counted as primary cells):

According to size / design

The most popular batteries for the consumer market

Batteries are often referred to as device batteries, which are very common for powering small electrical appliances such as clocks , radios , toys , flashlights and the like. Ä. and can also be used in permanently installed devices such as smoke detectors .

Device batteries have to be compact, usable in any position, light and yet mechanically robust. With normal storage and use in the device, they must neither leak nor outgas. They are commercially available in a large number of versions based on zinc-carbon or alkali-manganese . Zinc-carbon batteries have been offered less and less since the 2000s and are hardly manufactured today.

There are many types standardized by the IEC and some names from ANSI as well as unofficial names, especially for the nine most common categories.

With the IEC-60086 designations

These letters can be preceded by another letter to identify the batteries according to their chemical composition:

As already mentioned above, a distinction was made until around 1950:

Galvanic elements and batteries were called galvanic power generators for short and were standardized in VDE 0807.

The differences were reflected in the naming of galvanic power generators. This consisted of two or three letters, the nominal voltage and, if applicable, the number of cells:

Not every type of battery is available everywhere. That is why there are, for example, flat battery adapters that accept three AA cells of 1.5 V each. These can be used in all devices that can also accommodate a 4.5 V flat battery (3R12). These adapters are also useful because there are no rechargeable flat batteries.

In 2010 Microsoft offered a purely mechanical solution for a battery compartment called " InstaLoad " that allows individual cells to be inserted in any orientation. The contacts are designed in such a way that polarity reversal cannot occur. However, the process did not become relevant.

Batteries and accumulators do not belong in the residual waste or in the environment, as they contain environmentally harmful and reusable raw materials, which make battery recycling economically attractive for companies. Leaking batteries should also be handled with care, as there are sometimes corrosive substances on the contacts. They also have to be recycled and are considered problematic substances. 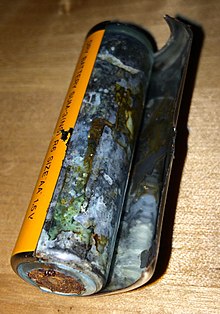 Image of a leaked R6 battery that is approximately 20 years old. The oxidized negative pole can be clearly seen. The housing was also chemically attacked by the long storage.

In Germany, the Battery Ordinance regulates the return and disposal of batteries. Among other things, it stipulates that no batteries or cells with a mercury content of more than 0.0005 percent by weight may be placed on the market in Germany. In button cell of the mercury content must not exceed 2.0 weight percent. Alkaline-manganese batteries have not contained any mercury since the early 1990s. Before that it was used to amalgamate the electrode material zinc . The poles of lithium batteries must be masked off before disposal.

Small batteries can be returned to retail stores in Germany if they also sell batteries. It is only legally mandatory to take back battery types that the respective retailer carries in the range; however, “foreign” types are usually also accepted, as this does not incur any disadvantages or costs for the dealer. For this purpose, collection containers must be set up there. There is a deposit system for starter batteries in Germany .

See also : Second use of batteries