He was the son of the rich sugar manufacturer Johann Hinrich Poggendorff (1744-1817), who was impoverished during the French occupation of Hamburg. At the age of 16, Johann Christian Poggendorff began an apprenticeship as a pharmacist in Hamburg. He then earned his living as a pharmacy assistant in Itzehoe . Encouraged by his former classmate Friedlieb Ferdinand Runge and his strong inclination to science, he gave up this position and moved to Berlin, where he attended university from 1820. Here his skills were quickly recognized, and in 1823 he was appointed a meteorological observer by the local Academy of Sciences. In 1854 he was elected a corresponding member of the Göttingen Academy of Sciences .

His grave was in the St. Marien and St. Nikolai Cemetery I in the Berlin district of Prenzlauer Berg . 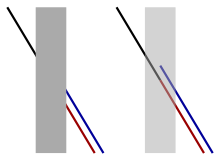 Poggendorff illusion: the black line is not an extension of the blue line.

In 1820 he built the first useful current measuring device ( galvanometer , galvanoscope, also multiplier) and in 1826, together with Gauss, invented the mirror reading for this measuring device. In 1841 he developed the Poggendorff compensation circuit or voltage compensation for the exact measurement of electrical voltages , currents and resistances (e.g. for calibration purposes) and carried out determinations of the electromotive force . He built an electrostatic motor similar to that of Holtz . He also invented a practical clamping screw in 1840, and in 1842 the Poggendorff element , which was also named after him , a galvanic primary element. In 1850 he described the Poggendorff deception . The Poggendorff balance is an experimental arrangement named after him.

In 1841, JR Mayer sent his treatise "On the quantitative and qualitative determination of forces" to Poggendorff for publication in his Annalen der Physik , in which he postulated a law of conservation of force (meaning energy). It later became known as the First Law of Thermodynamics, or Conservation of Energy . Also because Mayer's treatise contained fundamental physical errors, Poggendorff rejected it. Mayer didn't even get an answer to his submission. Only after Poggendorff's death 36 years later was the text found on him again. However, as early as 1842 Mayer's essay "Comments on the forces of inanimate nature" appeared in the Annalen der Chemie published by Friedrich Wöhler and Justus von Liebig . Nevertheless, Mayer had to wait for decades for his theory to be recognized; it only prevailed in the last years of his life.

In 1847 Poggendorff also rejected a work by Helmholtz on the same topic.

On October 26, 1861, Philipp Reis gave a lecture about his invention of the telephone in the lecture hall of the Physikalischer Verein . Poggendorff refused to publish the invention of Reis in his Annals of Physics and Chemistry because he thought it was a gimmick. He also did not include Reis' essay in his Biographisch-Literarisches Concise Dictionary of Exact Natural Sciences. In this way, Poggendorff helped ensure that Reis' telephone did not gain acceptance.

From an early age he thought about starting a scientific journal for physics and chemistry. The realization of this plan was accelerated by the sudden death of Ludwig Wilhelm Gilbert , editor of Gilbert's Annalen der Physik .

In 1824 Poggendorff contacted the publisher Christian Gottlob Barth in Leipzig . He developed Ludwig Wilhelm Gilbert's Annals of Physics from 1829 as editor of the Annals of Physics and Chemistry . In fact, it was a scientific journal that covered a wide range of topics and addressed itself not only to scholars, but also, in the interests of enlightenment, to a broad public interested in scientific knowledge. Poggendorff was excellently qualified for this post. He had an exceptionally good memory, arguably filled with modern and historical scientific knowledge, cool and objective judgment, and he preferred facts to speculative theories. Thus he was able to devote himself to the spirit and communication of modern experimental science. When classifying knowledge and in business life, he had a strong sense of order. He was also friendly and very tactful with people. These characteristics contributed to the fact that Poggendorffs Annalen soon became the leading scientific journal in Europe.

In the course of his 52 years as editor of the Annalen, he inevitably learned about the toil of science. Such knowledge, together with specialist knowledge that he had acquired during his extensive historical studies, he brought together in his " Biographical-literary concise dictionary for the history of the exact sciences ". It contained accounts of the lives and works of mathematicians, astronomers, physicists, and chemists from all peoples and ages. The book is an amazing collection of facts that are invaluable to science biographers and historians. The first two volumes were published in 1863. The project continued even after Poggendorff's death: a third volume, covering the period from 1858 to 1883, appeared in 1898. Another, fourth volume, which extended to the beginning of the 20th century , was published in 1904.

Poggendorff was a physicist of high, if not of the highest order. His math skills left a lot to be desired. He also lacked the strength to make scientific generalizations. However, he was a capable and conscientious experimenter and very fruitful and inventive in devising physical devices. The largest and most important part of his physical research was related to electricity and magnetism.

The plant genus Poggendorffia H.Karst is named after Poggendorff . from the passion flower family (Passifloraceae).