These telegraphs from G. Hasler ( Bern ) were in use on the Gotthard Railway

As telegraphy (also telegraphy written by ancient Greek τῆλε Tele , German , far ' and γράφειν Graphein , carve, write' see also -graphy ) is called a transmission of coded messages over a geographic distance at which no objects between transmitting and The receiving point can be moved and the beginnings of which can be traced back to antiquity . The components of a text to be transmitted (such as letters, numbers and punctuation marks and similar characters) are transmitted as individual characters . In contrast to radiotelephony and telephony , telegraphy does not speak, but rather the characters are transmitted via a code . A transmitted message was called a telegraphic despatch and from 1852 also a telegram .

There are different forms of telegraphy, the oldest being the optical one , in which the codes were still manually generated and evaluated by humans. In the past, special telegraphs were, in addition to the optical telegraph (also called semaphore), the fire, field, railroad, house and ship telegraphs. In the more recent, electrical or electromagnetic telegraphy, in which the characters were already transmitted in the form of Morse code (accordingly also called Morse code ), this was also necessary. The letter coding was only carried out automatically with the pointer telegraph and later with the teleprinter .

Depending on the level of technical development of the devices used, the distances that could be bridged increased, especially with the inventions of submarine cables and radio telegraphy at the end of the 19th century. By the year 2000 at the latest, however, the use of telegraph technology ended in almost all areas such as commercial applications and in transport , such as in the maritime sector, for example, in marine radio or in air traffic, for example with non-directional radio beacons (NDB). In the amateur service and partly for military messaging telegraphy is used to the present day.

Painting (1820) with a Chappe signal tower on Montmartre

In the Greek drama Agamemnon from 458 BC Chr. , A form of telegraphy with optical mentioned transmission. In the modern era, devices were also developed that used an optical transmission path, but no longer in the historical form using fire or smoke signals.

In Europe, the age of this more modern optical telegraph began in the 17th century. The Claude Chappes tower system was very successful . In France, for example, there were over 500 stations. The transmission of a message over a distance of 20 stations only took about 2 minutes. The emerging techniques of electrical or radio telegraphy in the 19th century replaced optical telegraphy.

Nevertheless, up to the present day there are various methods in which the optical transmission path is still used, for example with light signals, especially in naval ships. 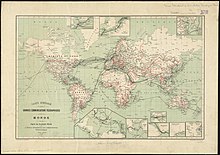 Wired electrical telegraphy was only able to develop after 1730 through the knowledge that electrical current moves along a conductor. Electrolyte telegraphs were only possible after the invention of the Voltaic column by Alessandro Volta in 1800.

In 1774 in Berlin , Georges-Louis Le Sage developed and presented the world's first form of electrical telegraphy , using 24 different wires , one for each letter of the alphabet . This telegraph connected two rooms. It was an electrostatic telegraph that moved gold leaves through electrical conduction.

One of the first pioneers in the field of electrical telegraphy was the doctor, meteorologist and physicist Francesc Salvà i Campillo from Barcelona . Salvà presented his system to the Reial Acadèmia de Ciències i Arts de Barcelona in 1795 . Salvà said back then that one day it would be possible to transmit electrical impulses wirelessly.

In 1804, Francesc Salvà i Campillo built an electrolyte telegraph in Spain with 26 lines , at the ends of which there are glass tubes in which liquids decompose in the event of an electric shock.

The anatomist Samuel Thomas von Soemmerring constructed an electric telegraph in Munich in 1809 , in which each character was transmitted through its own conductor and signaled by the electrochemical decomposition of the water. The original was in the possession of the Physikalischer Verein in Frankfurt am Main until 1905 . It is now in the Deutsches Museum in Munich; the Museum for Communication in Frankfurt has a model of its construction.

After Michael Faraday's research on electromagnetic induction in 1832, Wilhelm Weber and Carl Friedrich Gauß carried out experiments with an electromagnetic telegraph in 1833. In the same year they succeeded in transmitting the first telegraphic message from the physics building near the Paulinerkirche in downtown Göttingen to the Göttingen observatory . Messages were transmitted with positive or negative voltage pulses generated by targeted reversal of polarity and by moving an induction coil up and down. For this purpose, the coil was pushed over a bundle of magnetized steel rails. A replica that Weber commissioned for the 1873 World Exhibition in Vienna is kept in the historical collection of the First Physics Institute of the University of Göttingen . Another replica is in the telecommunications department of the German Museum in Munich.

1835 developed Paul Schilling of Canstadt in St. Petersburg a needle telegraph that stated by the deflections of a compass similarly mounted magnetic needle numbers 1 to 10 degrees. The Englishman William Fothergill Cooke saw this in Heidelberg in 1836 . In 1837, together with Charles Wheatstone , he created the first operationally reliable signal line for a railway line in England. The railway companies were instrumental in driving the development to transmit information faster than the trains themselves. This system was then also used for the first publicly used electrical telegraph lines, in Germany, for example, on the first longer European line from Bremen to Bremerhaven .

Carl August von Steinheil constructed the first printing telegraph in 1836, built a 5 km long telegraphy connection in Munich in 1837 and discovered the electrical "earth return line" during tests on the tracks of the Ludwig Railway in Fürth in 1838 , which meant a significant simplification for telegraphy. He transmitted messages with the help of his own code (the stone healing script ).

Sustainable progress came in 1837 with the writing telegraph designed by Samuel Morse and improved in 1844 . By 1850, Morse's technology had established itself on the German telegraph lines, which had formed a coherent network within a few years.

The laying of submarine cables began in 1850 (Dover – Calais). The first attempt to lay a submarine cable between Europe and North America was successful in 1858 - but the cable only worked for a few weeks and then had to be abandoned as unusable. It was not until 1866 - after further costly failures - that a permanent telegraph connection was established from Valentia (Ireland) to Heart's Content (Newfoundland). 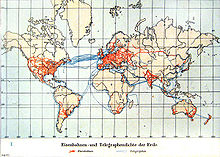 Railways and telegraph density of the earth , map around 1900

In the year of the invention of the electric telegraph (1833), Israel Beer Josaphat from Kassel began his banking apprenticeship in Göttingen. He understood the possibilities of the invention and built the Reuters Telegraphic Comp news agency from London under the name Paul Julius Reuter from 1851 . Incorporated on.

By 1870, large parts of the world were already wired. Because there was little experience with the service life of deep-sea cables in particular, the cable operators kept building. Use and forwarding contracts have been concluded between the telecommunications ministries of the federal states. Often you had to switch to those of other nations because of defective telegraphy cables. The main reason for a deteriorating transmission quality was the corrosion of the insulation of the copper wires. At the end of the 19th century, the use of telegraphy increased sharply. For example, in a typical week in 1871, around 60,000 telegraphic messages were sent through the British post offices; a year later there were over 200,000. With the introduction of the teleprinter , land-based telegraphy began to decline. In Australia and the USA it ended in the 1960s.

Morse key company G.Hasler
These Morse keys were in 1900 when the Gotthard railway in operation

The physicist Ferdinand Braun received the Nobel Prize in Physics in 1909 for his contribution to the development of telegraphy by radio. He shared the prize with Guglielmo Marconi , who successfully implemented it in practice and carried out the first transatlantic radio transmission. On September 20, 1898, Braun had set up the first wireless communication system at the Physics Institute in Strasbourg , which shortly afterwards extended 30 km to the Vosges town of Mutzig . Marconi set up the first wireless connection over the Bristol Channel in 1897 , and in the same year Braun set up a radio link from Cuxhaven extending 3 km to the Kugelbake . On September 24, 1900, such a connection was created over the 62 km long route Cuxhaven - Helgoland . On December 12, 1901, the first transatlantic radio transmission between Poldhu ( The Lizard Peninsula , Cornwall ) and St. John's (Newfoundland) was achieved .

In the early days, so-called pop - spark transmitters were used for radio telegraphy, and from 1908 mainly the extinguishing spark transmitters derived from them . Extinguishing spark transmitters use the damped oscillations that arise when the electrical charge is generated via a spark . (The use of spark gaps, which gave radio technology its name, was soon replaced by other technologies.) The high-frequency vibrations were keyed for the Morse code with the help of a Morse code key and fed into an antenna so that they were emitted as radio waves . In the early days, the receiver consisted of a so-called coherer (also known as a fritter), a component that is no longer in use today, which changes its electrical resistance as a function of high-frequency vibrations. In the first decade of the 20th century, the fritter was gradually replaced by options for audio reception of telegraph signals.

Morse code was used in shipping for a long time. Until the end of 1999 seagoing ships were internationally required to be able to make emergency calls in Morse code. The large German coastal radio station Norddeich Radio ended its shortwave telegraphy on September 30, 1996, one day before its shortwave radiotelephone service.

Morse code (" CW ") is still one of the common modes of operation for radio connections between radio amateurs . According to various estimates, half of them can use Morse code or one seventh of German radio amateurs are active Morse code telegraphers. Special clubs are also dedicated to amateur radio telegraphy. In addition to the standardized abbreviations for time-saving use in radio communications, numerous others have become commonplace in amateur radio .

A wireless transmission technology, as used by spark telegraphy, is light telegraphy. It was created as a result of the invention of the photophone by Alexander Graham Bell and Charles Sumner Tainter in 1880. Letters and numbers were sent as acoustic Morse code in a beam of light generated with selenium cells and deflected by several mirrors and then bundled. By Siemens & Halske in Germany and the UK on behalf of the Admiralty took place from 1916 to 1917 in the First World War, each developing military PhotoPhone with a special combination of u. a. Mirror, arc lamp for a distance of up to 15 kilometers.

During the Second World War , devices based on the photophone principle were used again. Technical amateurs have continued to develop the principle using laser , infrared and, most recently, LED technology, and have achieved transmissions over distances of up to about 100 kilometers.

Terminals and types of telegraphy

Telegraphy represented the first form of global networking of addressed data traffic, before telephony including fax and later Internet improved this function and replaced it in some cases.

Previously, information could only be gathered through material travel by a person or sending mail. Through boat trips and research, the Austrian geoscientist Ferdinand von Hochstetter established a connection between an earthquake in Peru and distant waves in the Pacific, for example in New Zealand, for the first time in 1868, thus describing the tsunami phenomenon for the first time , even before extensive communication networks in the form of submarine cables or radio.