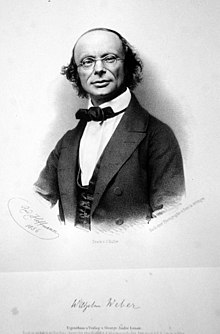 The birthplace in Wittenberg 2017

Wilhelm Eduard Weber (born October 24, 1804 in Wittenberg , † June 23, 1891 in Göttingen ) was a German physicist . The derived SI unit " Weber " ( unit symbol Wb) of the magnetic flux is named after him. He was the only natural scientist among the so-called Göttingen Seven .

The birthplace in Wittenberg 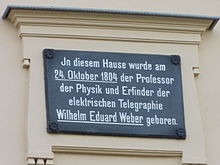 Wilhelm Weber was born as the son of theology professor Michael Weber at Wittenberger Schlossstrasse 10 in the house with the Golden Ball. His brothers were Ernst Heinrich Weber and Eduard Friedrich Weber . Due to the events of the Wars of Liberation and the relocation of the University of Wittenberg , his family moved via Bad Schmiedeberg to Halle an der Saale . Here Weber visited the Latina of the Francke Foundations and took part in the experimental investigations of his older brother Ernst Heinrich, which led to the publication of the book Wave theory, founded on experiments (Leipzig 1825). At the same time, he studied and completed his habilitation with a thesis on the theory of organ pipes .

After an extraordinary professorship in Halle, he followed the call to Göttingen ( Kingdom of Hanover ) in 1831 , where he became professor of physics at the Georg August University . He lost his office on December 14, 1837, along with six other Göttingen professors (see Göttinger Sieben ) when they protested against the repeal of the constitution. Subsequently Weber lived as a private scholar in Göttingen or was on longer journeys.

In 1843 he was appointed to Leipzig until he was able to return to his old position in 1849 after the bourgeois revolution of 1848 in Germany.

In Göttingen Weber was very close friends with Carl Friedrich Gauß , with whom he worked for many years. They constructed the first electromagnetic telegraph in 1833 . To do this, they laid two copper wires over the roofs of the city ​​of Göttingen and, at Easter 1833, arranged telegraphic communication between the physical institute and the magnetic observatory of the observatory . In the first telegram (in a code similar to the Morse code invented later), according to tradition, which is possibly just a legend, the text: "Michelmann is coming." (Michelmann was the servant of the institute.) In 1836 he founded together with Gauß and Alexander von Humboldt the Magnetic Association .

Weber's investigations into electrodynamic measurement methods, which he presented in seven essays in the treatises of the Royal Saxon Society of Sciences between 1846 and 1878, have acquired fundamental importance .

Measurements that Weber carried out together with Rudolf Kohlrausch in 1856 to determine the relationship between the electrodynamic and electrostatic charge units served James Clerk Maxwell in 1861/62 as the decisive support for his electromagnetic theory of light. Maxwell made explicit reference to Kohlrausch and Weber. That the constant found by Kohlrausch and Weber , which expresses the ratio of the charge units, was related to the speed of propagation of electrodynamic phenomena in conductors, was recognized by Weber and Gustav Robert Kirchhoff around the same time in 1857 . Both also recognized that this constant corresponded to the size according to the speed of light (later the constant was redefined to denote the speed of light). The ratio of the electrostatic and the electrodynamic unit corresponded to the amount of the speed of light (in a vacuum ) and thus combined optics and electricity theory in a surprising way . Maxwell then also considered the propagation of electromagnetic waves in a vacuum at this speed.

In 1846 Weber set up his own telephoto theory of electrodynamic phenomena, which was based on a speed- and acceleration-dependent law of force between moving charges.

On October 24, 1904, the 100th birthday of Weber's, he was honor in Wittenberg a body set up in the Gothic Revival style plaque with the Legal shown Relief medallion reveals the physicist solemnly. There is also the Wilhelm Weber House in Lutherstadt Wittenberg. A “Wilhelm-Weber-Strasse” can be found in Chemnitz, Göttingen, Hamburg, Wittenberg, Oldenburg and Offenbach am Main. On the back of the moon there is a crater named after Wilhelm Eduard Weber.

The University of Göttingen awarded the Gauß Weber Medal to important scientists at most once a year.

The Gauß-Weber monument in Göttingen (Wallanlage / Bürgerstrasse) based on a design by Ferdinand Hartzer was unveiled in 1899 and shows Gauß and Weber as the inventors of the electric telegraph.