from Wikipedia, the free encyclopedia
This is the spotted version , flagged on February 23, 2020 . There is 1 pending change that has yet to be viewed. 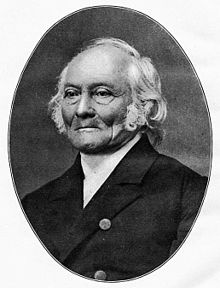 Ernst Heinrich Weber was a son of the theologian Michael Weber and brother of the physicist Wilhelm Eduard Weber (1804-1891) and the anatomist and physiologist Eduard Friedrich Weber (1806-1871), with whom he also collaborated scientifically. From April 2, 1807 to September 24, 1811, he attended the royal state and princely school St. Afra in Meissen . He then studied natural sciences in Wittenberg, but was evacuated to Leipzig due to the Napoleonic wars, where he completed his studies in 1815, received his doctorate and qualified as a professor in 1817 . In 1818 he became associate professor of medicine and comparative anatomy , in 1821 finally full professor of anatomy (until 1871), and in 1840 professor of physiology (until 1866). Weber also took part in the organizational tasks of the Leipzig University and was rector of the Alma Mater in 1838/39 and 1843/44 . In 1871 Weber celebrated his 50th anniversary as a full professor. In 1876 he was a senior at the University of Leipzig and the medical faculty.

Weber dealt with the human, comparative and microscopic anatomy as well as the evolutionary history of animals and physiology, especially their physical side; He has made important studies on the mechanics of walking as well as on the pressure, temperature and spatial sense in the human skin. Together with Gustav Theodor Fechner (1801–1887) Weber is one of the founders of experimental psychology and psychophysics . Weber-Fechner's law goes back to him .

In 1825 (and again in more detail in 1834) he described the Weber experiment, named after him, to test a hearing impairment. He was the first to notice lateralization (one-sided amplification of sound perception) under certain circumstances.