Gustav Theodor Fechner (born April 19, 1801 in Groß Särchen in Niederlausitz , † November 18, 1887 in Leipzig ; pseudonym Dr. Mises ) was a German physician , physicist and natural philosopher . Fechner is considered the founder of psychophysics . In later years he advocated a theory of the all-ensouling of the universe and is therefore one of the most important representatives of a panpsychistic worldview. 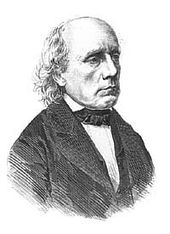 The house where Gustav Theodor Fechner lived and died in Leipzig

Fechner was born in Groß Särchen, east of the Lusatian Neisse , in Lower Lusatia, which was then part of the Electorate of Saxony . He was the son of the Protestant pastor Samuel Traugott Fechner (1765-1806) and his wife Johanna Dorothea nee Fischer (1774-1859). The father, who came from a local pastor's family, studied in Halle and Wittenberg and was very progressive. After several lightning strikes, he had the first lightning rod attached to the church tower in the village, had his children vaccinated and did not wear a wig to the sermon. After the father's death, the mother and five children moved to the neighboring town of Triebel . A short time later, the mother's brother , Gottlob Eusebius Fischer (1767 / 1769–1847) from Golßen , who was then a Protestant archdeacon of Wurzen , took in Fechner and his older brother. Four years later, the Fechner brothers moved with him to Ranis , where they befriended the son Ludwig Franz von Breitenbauch of the lord of the castle von Ranis. Both brothers were confirmed in Ranis in 1814 . In 1814 Gustav Theodor returned to Niederlausitz and attended the Latin school in Sorau . Even before Niederlausitz became Prussian, the mother and her four children moved to Dresden in 1815 to be close to their eldest son Eduard Clemens . Fechner attended the Kreuzschule there , but was dismissed after a year and a half with the words: “You have to go, you can't learn anything more with us.” So the sixteen-year-old enrolled as a medical student at Leipzig University. He heard physiology from Ernst Heinrich Weber and algebra from Carl Brandan Mollweide , otherwise he remained largely self-taught and was enthusiastic about Lorenz Oken's natural philosophy . In 1819 he became a baccalaureus , in 1823 a master's degree and lecturer . He did not feel talented as a doctor, especially the practical part of his studies had, according to his own admission, "completely deprived him of inclination and confidence". Despite passing the medical exam, he earned his living from literary work. From around 1824 he translated the leading textbooks in physics and chemistry by Jean-Baptiste Biot and Louis Jacques Thénard . In 1828 he was appointed associate professor. In 1833 Fechner married Clara Volkmann and together with Moritz Wilhelm Drobisch , Justus Wilhelm Martin Radius , Georg Benedict Winter and Wilhelm Wachsmuth took over the editing of the Leipziger literary newspaper . In 1834 he became professor for physics at the University of Leipzig . In 1835 he became the director of the newly opened physical institute, which is considered to be one of the oldest in Germany. In 1839 he had to give up the professorship in physics for health reasons, after his strenuous attempts at galvanism and physiological optics led to an eye disease that almost made him blind . As a result, Fechner devoted himself to the philosophical foundation of physics. Fechner is also the author of a well-known house lexicon in eight volumes ( Das Hauslexikon ), which was published from 1834. In 1843 he became professor of natural philosophy and anthropology at Leipzig University; he held this office until his death.

In January 1830 he founded the Chemisches Zentralblatt together with the publisher Leopold Voss . In 1846 Fechner was a co-founder of the Royal Saxon Society of Sciences in Leipzig .

Fechner is considered to be the founder of psychophysics , which creates a relationship between the object, the physical stimulus and the sensation ( percept ).

In 1876 he published the book Preschool of Aesthetics , not only for the accuracy of its descriptions. He has influenced aesthetics to this day through the innovation of the empirical approach, in other words deducting the general from individual phenomena ("from below", ie inductively ), instead of from the general to the particular ("from above", ie deductively ). Fechner thus founded the experimental aesthetic .

Although he failed in the attempt to determine a general law of aesthetic perception, he discovered a number of regularities and arranged them into principles. Pleasing is equated with pleasure, while displeasure is equated with displeasure.

Some of its principles are:

The principle of the aesthetic threshold

"Something has to be worthy of attention in terms of both strength and quality in order for me to turn to it."

The inner and outer threshold are interdependent: the higher the inner threshold, the more intense the external stimulus has to be in order to be noticed. An advertisement has to be either very large or very interesting in terms of content in order for me to even see it as I drive past. The more interesting the content, the smaller the area can be, and you will still notice it.

The principle of the difference threshold

The principle of aesthetic help

If trifles that arouse favor collapse, the resulting favor is much greater than for the individual parts themselves. A beautiful landscape, for example, is already beautiful in itself, but if the weather is also nice, you are in good company, preferably after an enjoyable meal, then the world is “perfect”, so much better than the result of the individual situations per se. The same rule applies to things that arouse displeasure. However, such situations will be less common because displeasing situations are eliminated immediately before they add up, whenever possible. It can happen that a tire bursts in the pouring rain and you are too late to start the presentation. In any case, the resulting displeasure is greater than that for the individual parts of the situation itself.

The principle of the unified connection of the manifold

Humans have an innate need for variety. However, the change must be connected by something, must have a unity. The longer the occupation with an object lasts, the greater its diversity should be in order not to become boring. A manifold that has no unity is perceived as chaotic.

The relationship between individual parts can be very simple (as in a circle, where each part behaves in exactly the same way as the other parts) or it can be highly complex.

A single (even complete) interruption of a uniformity is its greatest disturbance; a stain on a white dress interrupts the solid white. A regular interruption can compensate and even exceed the disturbance of the interruption through the regularity. Most people prefer complex patterns to empty spaces. The more varied something is, the stronger the aesthetic sensation will be, provided that a unity is perceived. If there is no unity, one sees a chaos from which one cannot derive anything. The higher the mental ability to perceive and process complexes, the greater the desire for them, and the faster it becomes bored with simple structures.

Principle of consistency, unanimity or truth

The aesthetic principle of association

“An orange is more beautiful than a suitably painted wooden ball” - this is how Fechner justifies the principle of association.

The sensual eye may perceive the same thing, but the spiritual eye sees a lot more in orange, for example the refreshing taste, but also the country of origin, and your own ideas about this country and its culture (summer, sunshine, sea, vacation, friendly people etc.).

What the sensual eye perceives (the direct impression) can be in harmony with or in contradiction to what is associated. The older and more experienced a person is, the more the memories (associations) tend to overlay the actual experience. Young people, on the other hand, are far more susceptible to influence.

Depending on the experiences already gained, associative demands are made on new things. If these requirements are met, a feeling of unanimity arises. If they are not fulfilled, we feel a contradiction.

"Feelings" are quick, unconscious associations in which the experience has already disappeared from memory, but the result in the associative feeling is retained.

According to Fechner, both the direct factors (in the visual arts, color, brightness, proportion, etc.) as well as the associative factors (image content or meaning) are fundamentally important for aesthetic perception.

Since then, various attempts have been made to clarify the relationship between unity and diversity or order and complexity. More recent attempts investigate the conditions in the visual arts and in music.

Dietrich Dörner examines the aesthetic perception on the basis of the basic need to “reduce indeterminacy”. 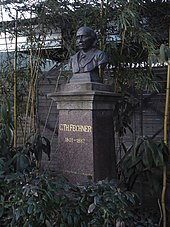 Fechner monument in the Rosental in Leipzig

In 1859 Fechner was elected a member of the Leopoldina learned society . In 1873 Fechner was given an honorary doctorate in medicine, and in 1884 he received honorary citizenship of the city of Leipzig . Since 1897 a memorial in the Rosental near the zoo in Leipzig has been commemorating him. In the Leipzig district of Gohlis , a street has had his name since 1900 ( Fechnerstrasse ), and there is a street of the same name in Dresden- Kaditz (since 1904).

There is a memorial plaque on his home, the Fechnerhaus . The Gustav-Theodor-Fechner-Schule , a high school closed in 2005 in the Leipzig district of Schönefeld , was named after Fechner .

In 1970 the lunar crater Fechner was named after him.

In 1990 the Gustav-Theodor-Fechner-Gesellschaft e. V. founded, which deals with the life and work of Fechner.

Fechner was the younger brother of the painter Eduard Fechner. He had three younger sisters Emilie (1803-1898), Clementine (1804-1893) and Mathilde (1806-1883). Clementine was Friedrich Wieck's second wife and thus became the stepmother of Clara Wieck (later Schumann). Mathilde married the postal secretary Kietz and became the stepmother of the painter Ernst Benedikt Kietz and the sculptor Gustav Adolph Kietz . Her own son Theodor Kietz also became a sculptor. As a widow Mathilde lived with her mother Fechner in Leipzig and moved to Dresden after her death. Emelie married the teacher Johannes Gottlieb Kuntze in Grimma . Their children were the lawyer Johannes Emil Kuntze and the politician Oskar Theodor Kuntze . From 1834 Johannes Emil was the foster son of his uncle Gustav Theodor Fechner. Emilie died very old as a widow Kuntze in Blasewitz .