The title of this article is ambiguous. Further meanings are listed under stimulus (disambiguation) .

In terms of neurobiology , a stimulus is the action on a sensory cell , with which a change in the membrane potential of its cell membrane is caused ( receptor potential ) and leads to hyperpolarization or depolarization . In the case of an assigned nerve cell , a supra-threshold stimulus triggers an action potential .

Adequate are stimuli which, according to their way, correspond particularly to a certain type of sensory cells, since these are optimized for such stimuli. Therefore, it is usually those stimuli that can build up a receptor potential in the sensory cell or trigger an action potential in the nerve cell with a comparatively low level of energy. For example, light stimuli are adequate stimuli for the cones and rods in the eye .

Inadequate stimuli can also cause a change in potential. But they are stimuli that do not correspond to the sensory cell and thus only lead to a receptor potential with a comparatively high level of energy or do not trigger any excitation at all. For example, mechanical pressure on the retina (such as a fist on the eye) can create a visual impression (as white spots or “asterisks”). Likewise, light electrical voltages applied externally, e.g. B. on the tongue, the sensory cells associated with sensations in the central nervous system can be triggered (such as a "sweet and sour" impression). But bright light is not tasted even with the tongue out.

Even with adequate stimuli it can happen that the amount of energy is insufficient to excite the associated nerve cell ( all-or-nothing principle ). However, if such stimuli arrive in rapid temporal sequences or small spatial intervals, they can become a supra-threshold stimulus through summation and excite the afferent neuron.

Here, the amount of energy of a stimulus is sufficient to interact with the receptive structures of the cell and to initiate cellular signal transduction , which leads to a receptor potential of the sensory cell , which is converted into series of action potentials in the assigned nerve cell - which are conducted via the optic nerve , for example .

Depending on the respective conditions in the transmitting afferent system (including contrasting and adaptation ) as well as the current level of alertness ( vigilance status ), sensations are then also possible that can be consciously perceived as sensory impressions. 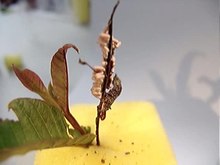 Play media file
This moth larva reacts to contact with a predator.

Sensations and sensory impressions only arise in the central nervous system and are no longer directly measurable ( black box ). They can only be recorded using psychological methods. Perceptions arise through the connection of sensory impressions with experiences and oneself.

Living beings react to both external (coming from the environment) and internal (within the organism itself) stimuli. A stimulus can be followed by a reaction ; however, such processing steps that follow the stimulus reception can also be inhibited (see also stimulus filtering ). In a living being, recorded stimuli are differentiated (differentiated), related to each other (integrated) and evaluated for possible reactions - with regard to the coordination between subsystems of a living being and with regard to the interaction between living beings and the environment. In animals, sensory cells are connected via synapses with decentralized nerve nodes or with a central nervous system, in which stimuli caused by stimuli are processed in relation to possible reactions.

A stimulus acts on the receptors (sensory cells) or acceptors (sensory organs) of an organism and is transmitted afferently via sensory or sensory nerves to the central nervous system ( spinal cord and / or brain ) and processed there. An impulse can then be transmitted efferent via motor nerves to an effector (organ of success) such as a muscle or a gland. As a response or effect, for example, a muscle contraction can occur, with which the relationship to the environment is changed in a stimulus-related manner.

In plants , signals are passed on almost exclusively through chemical reactions , with light being a very important stimulus (see light as an eco-factor ). Temperature , chemical substances , gravity and other influences can also trigger stimuli. Various stimuli can interact during processing.

Types of perception and their stimuli

Perception is adapted to the spectrum and intensity of the stimuli required (e.g. hearing threshold ). Humans know the following external senses and the associated stimuli:

In business life - in particular in consumer goods advertising and in retail psychology - the entire spectrum of stimuli is used to arouse interest in goods and also to trigger sales.

In addition, there are the senses, which are used for self-perception (for an overview see Sensitivity (Medicine) ):

However, there are also countless other stimulus qualities such as B. Magnetism and ultrasound that humans cannot perceive.

A stimulus (e.g. heat, pressure, pain, etc.) is an external effect that is absorbed, for example, in the skin by sensory cells (receptors). A stimulus causes electrical impulses to develop in the downstream nerve cells, which are known as excitation . There is no "stimulus conduction", as only the electrical impulses can be passed on by the fibers. However, no stimulus is necessary for the generation of excitation in the heart and the conduction of excitation through the fibers of the excitation conduction system.