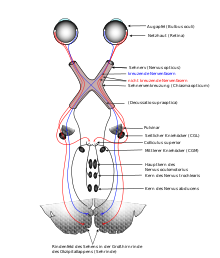 Seeing with the eyes and the brain

Physiological details on the visual perception apparatus of humans and similar sighted animals can be found under visual system . The light path is described under dioptric apparatus .

In ancient times there were different theories about visual perception:

The perception theory of Euclid (365-300 BC) dealt with problems of spatial perception (e.g. perspective and constancy of size ). According to this theory, the lines of sight come from the eye and determine perception. This theory of the “line of sight” seems to be quite absurd in the light of physical considerations, but receives a kind of late rehabilitation through the modern findings of eye movement analyzes (see Fovea centralis ).

The perception theory of Empedocles (492-432 BC) apparently said the opposite. The influences of things emanating from the pores (according to the pore theory of Empedocles, which was taken up by atomistics ), a type of radiation that is influenced by light, penetrate the sense organs and are perceived when they find a correspondence there (the same becomes recognized by the same). This theory, too, which deals with the knowledge of things in the outside world, is more modern in its approach than it seems. From today's point of view, it relates to peripheral perception, which also affects the viewer, even if he is not looking at all. 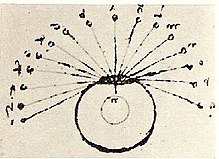 Leonardo da Vinci: "The eye has a single central line, and all things that reach the eye through this line can be seen well."

He demonstrated through experiments that perception is influenced by a person's personal experience. Al-Haytham performed experiments on human perception and complemented Ptolemy's work on stereoscopic vision .

Leonardo da Vinci (1452–1519) was the first to recognize the optical characteristics of the human eye. He wrote: “The eye has a single central line, and all things that come to the eye through that line are well seen. Around this line there is an infinitely large number of other lines which come into contact with the central line and which are all the more ineffective the further away they are from said central line. "

Leonardo came to this point of view through observation and optical experiments. “The eye, of which experience so clearly reveals its function, has been described in a certain way by an infinite number of authors; But I think it's completely different. ”He is the discoverer of the difference between foveal and peripheral vision.

Hermann von Helmholtz is often seen as the father of modern visual perception theory. He compared the eye to optical devices and found its design features very primitive. Theoretically, the eye could not provide any useful visual results. He concluded from this that perception can only come about through “unconscious inferences” made possible by already existing perceptual experiences.

Such perceptual experiences are z. B .:

Note: Perceptual experiences play an important role in photography (and also in film recordings): If a lighting or representation does not follow general perceptual experiences, the image is described as “unnatural” or “false” (regardless of the procedure for achieving special effects).

The study of optical illusions has shown which unconscious conclusions can be contained in the perception process.

Another type of unconscious inference is based on the perception of probability, which is determined by the frequency of similar perceptions already made.

The dioptric apparatus of the eye creates a reversed image on the retina that is upside down. The light stimuli are registered by the sensory cells of the retina , the rods (brightness) and cones (color vision). The ratio of cell types differs depending on the location on the retina; there are only cones in the fovea . When exposed to light, cones and rods form a membrane potential that is passed on to ganglion cells via bipolar cells .

Since the stimulus intensity also accelerates the optical reaction speed in the case of selection reactions , it has been tested both in the laboratory and in the cinema using football films whether and to what extent a strong optical stimulus (bright jersey color clearly different from the background) also promotes the reaction speed in sports games. The tests so far make it clear that it is above all the glittering jerseys (e.g. in gold) that speed up the reaction time. Dark jerseys, on the other hand, slow down reaction times in sports games. The stimulus absorption is even worse (slower) if the background and the stimulus are too similar, e.g. B. Green jerseys on grass as a background.

The information from the ganglion cells is transmitted to the left and right lateral knee cusps via the visual pathway . The output of the on- and off-center cells is connected in the lateral knees so that edges (i.e. areas in which a change in brightness takes place) or bars (change in brightness and return to the initial intensity) are extracted. The processed information is projected from the lateral knees onto the visual cortex . This processing of the signals also includes an increase in the contrast sensitivity via feedback processes, which ensure that the high light sensitivity is maintained at the same time as the contrast enhancement.

The perception of space is based on several processes to create a representation of the three-dimensional world from the two-dimensional image on the retina. Using stereoscopic vision , spatial information can be constructed from the slight differences between the images recorded by the pair of eyes. If the viewer moves relative to objects in space, the images on the retina move more slowly the further away the object is from the viewer. In addition, spatial perception can take place via the texture gradient, i. H. about the changes in texture depending on the spatial distance.

Before objects can be recognized and interpreted, it must first be extracted from the information where objects are located and which of the recognized lines belong to an object. These gestalt heuristics (also gestalt principles ; the historical term gestalt laws should, however, be avoided) all work according to the principle of finding the most concise solution possible ( gestalt psychology ):

The extracted objects are interpreted in object recognition and can be compared with memories.

An object can be compared with an existing memory through a feature analysis. This model assumes that a shape or an object is represented in a set of abstract features. The letter K has z. B. the characteristics "long vertical line", "shorter line with approx. 30 ° inclination" and "shorter line with approx. 75 ° inclination". This model is superior to a template comparison in that modified patterns are also recognized. With the "K", the size, position, rotation or font can be changed so that a "template" would no longer fit. However, under all these transformations, the characteristics remain the same. In addition, the comparison of features corresponds to the encoding by the ganglion cells (extraction of lines).

The "theory of volumetric recognition" exists for recognizing complex objects.

The actual recognition takes place during the assignment. The object is classified and then represents an object of a category (such as assignment as “dog” or “telephone”).

Recognizing faces is one of the most important social perceptions of humans. In contrast to many everyday objects, faces have to be identified singularly and are therefore a special kind of perception scheme. For facial recognition, however, not only the imprinting of specific features (e.g. size of the nose), but also their relationships (e.g. eye distance to the length of the nose) is used.

Leder and Bruce (2000) were able to demonstrate the importance of the configuration of features. Test subjects were asked to memorize different faces and were then tested. The pictures were shown to them both upright and upside down. In this inverted position, it was primarily the relationships between the features that enabled the test subjects to recognize the faces.

As is already known from brain research, when certain cortical areas are injured or damaged, the identification of familiar faces is no longer possible ( prosopagnosia ). This suggests the theory that the perception of faces is arguably supported by specialized cortex fields.

The first two seconds when looking at a picture

In the years after 1960, more and more eye movements were recorded and analyzed, e. B. when reading texts, when looking at pictures and later also when solving visual problems and driving a car. The picture on the left shows what can happen in the first two seconds of viewing an image. The background is blurred by peripheral vision . Nevertheless, one can see that it is a scene in a room with people. The first eye fixation shows a pair of men's shoes, perhaps because they have a strong contrast and are also very close to the basic position of the eye fixations. All subsequent fixations jump from face to face.

One can conclude from this that the human face normally receives the most attention because it enables identification or an assessment of a person on the basis of biometric similarities and thus already permits an initial assessment of an interpersonal situation.

An essential fact: human perception is heuristic and not linear; That is, those parts of an image are considered which contain additional information, while subjectively unimportant or already well-known image elements are not fixed (additional examples → eye movement registration ).

On a computational level, David Marr created a theory of the processing of visual impressions for visual perception in the brain in the 1980s, which is used in the field of artificial intelligence. This theory has never been tested experimentally.

A neurophysiologically oriented theory of visual perception is exemplified in the article Perception .

Classification according to external and internal stimuli: Exteroception  | Interoception