The theory of colors is the study of systems for the order of colors .

The following sub-areas are dealt with:

Color theory is to be distinguished from color perception , color psychology and the teaching of colorants , in which pigments and dyes are treated with the effect of the chemical structure on the color tone.

Essentially, the existing color theories and color theories are based on two different focuses. These partly contradicted each other in history, but increasingly complement each other through a more comprehensive understanding of the research results from physics (electromagnetism and optics), physiology and psychology, the chemical basis of colorants and the resulting explanatory and interpretation models in connection with diverse artistic conceptions.

One speaks of color theories in the sense of the different interpretations of the named fields of knowledge. Fundamental is the difference between the perceptible colors (from color stimulus to color valence ), which are realized by light sources (colored lights), and those more complex processes that can be represented by colorants (available pigments are limited by the chemical varieties). In the first case, the “individual” perceives the light emanating from the radiator. In the second case, there is an absorbing surface with (chemically-physically definable) colored bodies ( gamut ) between the light source and the perceiving sensory organ . The processes in the “individual” individualize the color effect in a more physically-predefined manner or more “psychologically” -perceptually.

A special form of the theory of colors is the theory of harmony, which deals with the interplay of colors (hues). This interaction is strongly influenced by the culture, individual experience and artistic intention. Major creators of color theories are often also representatives of harmony or gave reflections on "color harmony" in their color theory: Goethe , Ostwald , Itten , Küppers .

Depending on the research focus, a number of heterogeneous color theories provided the theoretical foundation for recording, processing, incorporating and assigning color phenomena and color principles (coloring principles) as well as their application in different fields of activity . Sorted chronologically by year of birth, personalities follow who have significantly influenced the development of color theory from various perspectives. 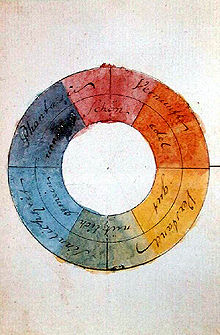 In exchange with painters and philosophers, Goethe also dealt intensively with “The Color”, which stood as a unit in his overall view of the world. He discovered the phenomenon of subjective colors and the basic principles of color vision , the afterimage effect and simultaneous contrast . From his own point of view, he was interested in the phenomenon of colored shadows as part of a color theory that understands the emergence of colors from the lively interaction of light and dark. Inevitably, he felt the basic phenomenon of Newtonian optics, which is based on the color spectrum of a refracted light beam, as an aberration. Rather, the prism creates a yellow and a blue border by "pushing" light and dark. These edges blend into green or red, depending on the proportion of light and dark (this is how the colors of the rainbow are created - red, yellow, green , blue, purple). Yellow means a greater proportion of light, blue predominantly dark.

In addition to the physical decomposition of colors including the color mixing , Goethe (with reference to Runge) dealt with the sensual and moral effect of color. From his understanding of color, the harmony of color in the battle between light and dark is to be sought. Yellow, the “victory” of the light, has an easy-going effect, while blue has a dampening effect. Purple is the highest increase because the opposites were balanced.

At the end of his work on the theory of colors , Goethe explained his basic assumptions when dealing with Newton.

“Light is the simple, undivided, most homogeneous being that we know. It's not compound. Least of all from colored lights. Any light that has taken on a color is darker than the colorless light. The light cannot be composed of darkness. - There are only two pure colors, blue and yellow. A color property that belongs to both, red, and two mixtures, green and purple; the rest are degrees of these colors or impure. - Neither from apparent colors can colorless light nor from colored pigments a white can be composed. All experiments set up are wrong or wrongly applied. "

Two centuries after the publication of Goethe's work, his contribution “On the Theory of Colors” is primarily of cultural and historical importance. His thoughts on physiological colors and their effect on the viewer were taken up and developed further. His observations and methods with regard to the effect of colors can be seen as the beginning of modern color psychology . Color influences the feeling and thus has a direct effect on the "soul" and thus also on the unity of body and mind. Goethe divided into "beautiful" colors that are sympathetic to the viewer and those that hurt the eye and are therefore unappealing.

The physical approaches have their starting point in 1861 in James Clerk Maxwell's proof that every color is composed of the primary or basic colors red , green and blue , i.e. ultimately of 'color' lights.

With the onset of industrialization, the requirements for standardization of color increased. The development of photography and the discovery of new elements through the method of spectral analysis raised the question of causes and connections. Ostwald's color theory was intended to be an aid for the painter, but its starting point was the physical understanding of color through its energy concept. 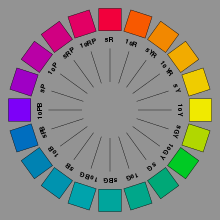 The American painter AHMunsell took the trouble to design a catalog of colors in such a way that, according to his perception, the same distances arose between all color nuances . "A Color Notation" from 1905 is an atlas of color samples and has become a widely used color system. At first, according to NO Roods, he also started from the color wheel customary at the time .

Although the circle appears as an ideal figure for the sensitivity of the colors, but during its development he came to the conclusion that the circle and the three-dimensional sphere of color could not be confirmed. He formulated a color space with the colorants available in the 1900s . He assigned 100 levels to the hue ("Hue"), assuming five main colors (yellow-green-blue-purple-red) and five secondary colors (YG> BG> PB> RP> YR). For the order of the colors in the third dimension he used ten V-Units ("value" = brightness value) as a basis. To do this, he divided the achromatic colors between black with 0 and white with 100 in ten levels of different neutral gray . He chose the C value as the third coordinate , the chroma is the measure of saturation and it was chosen as an open scale. With his experience as a painter, Munsell came to the realization that the various basic colors, secondary colors and intermediate tones chosen as a basis can be colored with different «chroma» levels. 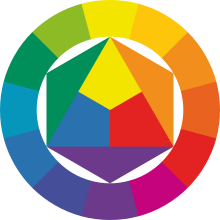 Johannes Itten (1888–1967) was a drawing teacher at the Bauhaus and differentiated the color tones using the complementary colors orange, green and purple and depicted them in a color wheel. He called white and black “non-colors”. His three-dimensional order model of the colors was the sphere that Philipp Otto Runge had developed in 1810. Based on the idea of ​​his teacher Adolf Hölzel , he set up his theory of the “ seven color contrasts ”, which depicts the mutual dependence and influence of colors on one another and is thus a theory of harmony.

The color body of color theory according to Harald Küppers

Harald Liebedank Küppers developed his technically oriented color theory in the second half of the 20th century. For him, the “functional principle of the visual organ is the basic law of color theory”. Küppers defined eight colors, which as opaque colorants cannot be produced through mixtures, as basic colors (six colored and two achromatic). Its three-dimensional, geometric system of ordering the colors is a rhombohedron , an RGB cube stretched across the vertical black-and-white diagonal. He arranges the "pure bright colors" on his chromatic hexagon. In his opinion, there are only linear relationships between all color nuances. On the "achromatic axis" of the rhombohedron, the gray tones lie between black and white. In his opinion, black is “the basic sensation of the visual organ”.

In his “Basic Scheme of Color Theory”, the black rhombuses in the middle point to three “primordial colors” (“sensory powers” ​​of the organ of vision): orange-red (R), green (G) and violet-blue (B). The other three colorful color sensations yellow (Y), magenta red (M) and cyan blue (C) are created through two “sensory forces” together. If all three sensory forces are fully effective at the same time, this leads to the color sensation white.

For opaque colorants he developed his " integrated color mixture ". The six basic colors in the serrated ring indicate the corners of the chromatic hexagon. Black and white at the ends of the "achromatic straight lines" are the achromatic basic colors.

Differentiation of the color theories

Teachings and theories in the complex field of color differ in their objectives and methods. The scientific basis for the perception of colors is that light in the (visible) electromagnetic spectrum carries information that is recognized as color in human perception.

All color theories were initially based on direct vision in order to create a system for the use of the "seen" colors and their relationship to one another. These artistic-aesthetic color theories , which have been influenced again and again over the centuries by “academic” painters, have entered art history. Such color theories come, for example, from Leonardo da Vinci , Johann Wolfgang von Goethe , Adolf Hölzel and Georges Seurat .

While the subjective feeling and the artistic intention were in the foreground, physical knowledge and the requirements of the growing industry were added as new basic elements in the second half of the 19th century. Munsell's color system is one example . In Germany it was above all Wilhelm Ostwald who suggested colorimetric considerations that were to influence artistic design.

Biological research has led to advances in visual physiology and the chemical and physiological aspects of color perception. Theories of color that evaluate the mutual relationship between color and soul are based on color psychology. Such is the color theory of the painter and Bauhaus master Johannes Itten , who gave the inspiration for the popular theory of color types with his observations .

From a scientific point of view, colorimetry is based , which deals with the measurement of colors and especially the detection of color distances . A necessary differentiation of this subject is the division into the lower colorimetry, which describes the physical causes of color and its properties. The higher colorimetry includes the perception of color. The goal of colorimetry, a suitable color space to define themselves in the colors equidistant be arranged, since the eye is different evenly neither linear nor the physical stimulus in different color spaces. Identical color differences - or rather the relationship ΔE = f (X, Y, Z) - can be made clear by means of the MacAdam ellipses . The advancing computing technology and mathematical theory led to several adjustments to the standardized color spaces.

Colorimetry relates to spectral colors , additive and subtractive color mixing and the laws of lighting technology. It forms the basis for color theories that are scientifically oriented. One such color theory is that of Harald Küppers, which arose out of the intention to take up scientific advances, in particular to create didactic aids that enable the technician to gain an artistic understanding.

Scientific approaches, psychological and artistic-aesthetic approaches stand side by side, against each other or are linked to one another, depending on the point of view and the field of work. A purely physical view of color is opposed to an exclusively aesthetic one. For technical requirements, the alphanumeric recording of color is indispensable, on the other hand, "the pleasing form" according to the "laws of beauty" or another artistic postulate cannot be recorded on a primarily numerical level.