Philipp Otto Runge (born July 23, 1777 in Wolgast , † December 2, 1810 in Hamburg ) was next to Caspar David Friedrich the most important German painter of the early Romantic period .

Philipp Otto Runge was born in the sea and trading town of Wolgast in Swedish Pomerania as the ninth of eleven children of the married couple Daniel Nikolaus Runge (1737-1825) and Magdalena Dorothea (1737-1818), daughter of the farrier Daniel Christian Müller. The paternal grandfather, Nicolaus Runge (1700–1766), came from a Rügen peasant family, settled in Wolgast after 1720 and acquired citizenship in 1729 . The artist's father, Daniel Nikolaus, was a merchant and shipowner. His son, who developed pulmonary tuberculosis at an early age, was originally supposed to follow in his father's footsteps, but was able to achieve his wish to become a painter.

In 1789 Runge attended the Wolgast school, the director of which was Ludwig Gotthard Kosegarten . Runge fell seriously ill in 1792 and moved to Hamburg with his eldest brother Daniel in 1795 to begin an apprenticeship as a businessman in his “commission and shipping business”. His brother's circle of friends, which included the poet Matthias Claudius , the publisher Justus Perthes and the art collector Johannes Michael Speckter , as well as his encounter with Friedrich Gottlieb Klopstock , encouraged Runge to draw and study ancient authors.

After first drawing lessons in 1797 by Heinrich Joachim Herterich and Gerdt Hardorff the Elder . Ä. In Hamburg he studied from 1799 to 1801 at the Royal Academy in Copenhagen with Jens Juel as well as nude and antique copies, free hand drawing, anatomy, geometry and perspective with Nicolai Abildgaard , a teacher of Thorvaldsen . Afterwards he studied from 1801 to 1804 with Anton Graff in Dresden at the art academy , where he made contact with the Romantics, especially Caspar David Friedrich and Johann Gottfried Quistorp . The poet Ludwig Tieck , whom he met in Dresden, imparted the mysticism of Jakob Boehme to him and made him familiar with Novalis ' views . On a trip to Weimar he met Johann Wolfgang von Goethe . 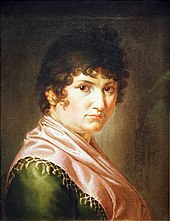 In the summer of 1801, Philipp Otto Runge and Pauline Susanna Bassenge (born September 18, 1785 in Dresden; † April 26, 1881 in Hamburg) met for the first time in Dresden. The daughter of the glove manufacturer Charles Frédéric Bassenge of Huguenot descent was not yet sixteen at the time. Initially, the father firmly refused his daughter's association with Runge - it was not until April 1803 that he agreed to an engagement. On April 3, 1804, Pauline and Otto married in Dresden. The couple moved to Hamburg and they had four children. The youngest child was born the day after Runge's death and was given his father's first name. Philipp Otto Runge died of tuberculosis .

Throughout his life, Runge pursued the handicraft of paper cutting and, for example, sent Goethe numerous flowers for decorating the room, including instructions for attaching and storing the cuts. Some contemporaries appreciated his paper cuttings. Johanna Schopenhauer admired his silhouettes so much that she tried to cut in Runge's manner herself. In 1805 he achieved his artistic breakthrough with etchings for his paper cuttings in the cycle The Times . This was published in a first edition of 25 pieces. Goethe bought a copy and used it to decorate his music room with the assessment: "To get mad, great and beautiful at the same time."

Runge, who opposed academic painting based on a subject, is next to Friedrich the most important painter of North German Romanticism. Together with Friedrich he represents the North German Early Romanticism. He was more preoccupied with figurative painting than Friedrich and, above all, as a portraitist he created remarkable things ( Die Hülsenbeckschen Kinder , 1806). As an art theorist, he expressed revolutionary ideas for the time and developed his romantic conception of art in his "bequeathed writings". Inspired by Ludwig Tieck's artist novel Franz Sternbald's Wanderings , Runge developed a speculative conception of the “landscape” as a large “hieroglyph”; H. Allegory or symbol (examples: The two versions of The Morning , Arion's Voyage to the Sea , The Times ). According to Runge, the “deepest mysticism of religion” could only be expressed in the new art of a special “landscape” that he had in mind, which constitutes the core of his romantic art conception. Runge was inspired by the vision of uniting painting, poetry, music and architecture in a total work of art, thereby breaking new artistic territory.

Runge's landscape and his concept of artistically designing the entire human environment make him a pioneer of the total work of art . Runge made contributions to German literature by composing several poems. He wrote the two fairy tales Van den Machandelboom and Van den Fischer and siine Fru and made them available to the Brothers Grimm .

Runge contributed to the theory of art through his writing Color Ball , about which he corresponded with Johann Wolfgang von Goethe. He created the first three-dimensional color system .

Runge became the fictional character in The Flounder by Günter Grass . Runge exchanged letters with Clemens Brentano , which was published as a book in 1974, edited by Konrad Feilchenfeldt .

Runge's grave in the Ohlsdorf cemetery

Three important works by Runge were destroyed in the major fire of the Munich Glass Palace in 1931 . In the Hamburger Kunsthalle , where the exhibition Runge und seine Zeit took place in 1977/78 , you can find almost all of Runge's surviving works. Some of his works are also in the possession of the cultural history museum of the city of Stralsund and in the Pomeranian State Museum Greifswald. On the occasion of the 200th anniversary of his death on December 2, 2010, the exhibition Kosmos Runge. The morning of romance opens. The exhibition then went to the art gallery of the Hypo-Kulturstiftung in Munich .