This article deals with the German writer; on the German diplomat see Clemens von Brentano .

Clemens Wenzeslaus Brentano de La Roche (born September 9, 1778 in Ehrenbreitstein (today Koblenz ), † July 28, 1842 in Aschaffenburg ) was a German writer and, along with Achim von Arnim, the main representative of the so-called Heidelberg Romanticism .

Clemens Brentano was the second son of the Frankfurt merchant Peter Anton Brentano (from the line of Brentano di Tremezzo ) and his (second) wife, Maximiliane von La Roche , who was admired by the young Goethe , and was thus a grandson of Sophie von La Roche . His numerous siblings included Bettina , who was also an important romantic writer, Georg , Christian , Sophie , Ludovica ("Lulu"), Kunigunde ("Gunda"), who was married to the legal scholar Friedrich Carl von Savigny , and Magdalene ( "Meline"; married by Guaita).

He was baptized a Catholic; the middle name "Maria" found in many encyclopedias is not one of his baptismal names. In his first publications, Brentano used the name Maria as a pseudonym and always stated September 8th, the holiday of the birth of Mary , as his birthday. The name is often Clemens Brentano wrote, but these (false) based ennoblement of the poet on a confusion with the diplomat Clemens Brentano (1886-1965), who with Clemens Brentano remotely - as a great-grandson of his half brother Franz Brentano Dominicus related - is.

Clemens Brentano grew up moving several times in Frankfurt am Main and Koblenz as well as briefly in Heidelberg and Mannheim .

During a trip in Jena, Clemens Brentano made friends with Hans von Bostel (1779–1839) and Friedrich Carl von Savigny (1779–1861) of the same age . Von Savigny taught at the University of Marburg after 1800. His first student in Marburg was Jacob Grimm , through whom his brother Wilhelm Grimm joined the group. In 1804 Savigny married Kunigunde Brentano , the older sister of Clemens and Bettina Brentano . In 1805 Savigny also got to know Achim von Arnim and met Karoline von Günderrode . In 1811 Bettina Brentano married Achim von Arnim. As Bettina von Arnim, she became an important representative of German Romanticism.

This group often stayed at Trages farm . Clemens Brentano wrote his famous fairy tale Gockel, Hinkel und Gackeleia (published in 1838) here in the 1830s . The story begins with the sentence "In Germany in a wild forest, between Gelnhausen and Hanau, there lived an honorable elderly man [...]". Descriptions of the location contained in the following text suggest that the romantic ruins of the nearby St. Wolfgang monastery near Hanau served as a template for the “Gockelsruh” location. 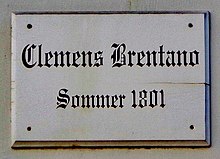 After the failure of a commercial apprenticeship from 1795–1796 in Langensalza , he studied mountain sciences in Halle from May 19, 1797 and switched on June 5, 1798 to study medicine at the University of Jena . Instead of completing his studies, he devoted himself more and more to his literary inclinations. In Jena he got to know the representatives of the Weimar Classic ( Christoph Martin Wieland , Johann Gottfried von Herder , Johann Wolfgang von Goethe ) and the early romanticism ( Friedrich Schlegel , Johann Gottlieb Fichte and Ludwig Tieck ). The latter is almost fully represented in Jena from 1800. Brentano was inspired by her works and literary theoretical writings, especially for the novel Godwi , which also contains some of Brentano's most famous poems ( Zu Bacharach am Rheine , Speak from afar , A fisherman sat in the boat ).

In 1801 in Göttingen , where he was enrolled as a student of philosophy, he met Ludwig Achim von Arnim , with whom he soon became close friends and with whom he undertook a trip on the Rhine in 1802 . In the next few years he lived with Arnim over and over again for longer periods of time until 1811. 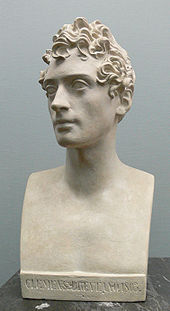 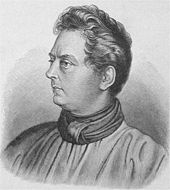 Clemens Brentano (picture from a lexicon from 1906; excerpt from an etching by Ludwig Emil Grimm, 1837)

After his marriage to the writer Sophie Mereau , he moved to Heidelberg in 1804 , where he and Arnim published the newspaper for hermits and the folk song collection Des Knaben Wunderhorn . His wife died in 1806 giving birth to a third child; the first two children - Achim and Joachime - were only a few weeks old. Sophie also suffered a miscarriage.

A few months later, Brentano married Auguste Bußmann , but kept his “wandering life” (stays in Kassel and Landshut). By Hans Magnus Enzensberger as the prototype of amour fou relationship described is the theme in the movie Requiem for a Romantic Woman of Dagmar Knöpfel . This second marriage ended in divorce in 1814.

From the end of 1809 he stayed in Berlin , where he took part in literary life and worked on his verse epic Romances of the Rosary (which had been created since 1802 and was only published posthumously) and on the Rhine fairy tales (also only published after his death) . He was one of the founding members of the German Table Society , which had existed since 1810, and he actively supported its anti-Judaic tendency , which in some cases led to anti-Semitism , with his work The Philistines Before, During and After History . Anti-Judaist allusions can also be found in many of his other works from after 1810 (e.g. in Gockel, Hinkel and Gakeleia ), the most famous of his religious works, The Bitter Suffering , brings together almost all topoi of Christian anti-Judaism. On the other hand, in another work, which was written at about the same time, The Life of Jesus , there is a precise and apparently sympathetic description of Judaism at the time of Christ.

His collaboration on Heinrich von Kleist's Berliner Abendblatt only lasted for a short time ; it ended after differences with Kleist.

In 1811 Brentano left Berlin to spend the next two years in Bohemia and, from 1813, in Vienna. During this time the dramas Aloys and Imelde (published only in 1912) and The Foundation of Prags (published in print in 1815) were written. The attempt to establish himself as a playwright in Vienna led to a blatant failure.

Since his return to Berlin in 1815, Brentano found himself in a life crisis that led him first to the Pietist revival movement and finally to return to the Catholic Church. This step was motivated by his acquaintance with the pastor's daughter Luise Hensel , whom he met at the end of 1816. First, the divorced Brentano considered converting to Protestantism in order to be able to marry Luise Hensel. When she rejected his request, he tried to convert his friend to the Catholic Church; In 1818 she converted. In 1817 he made the general confession and staged his renunciation of secular poetry, but without saying goodbye to poetry in private. The poetry dedicated to Luise Hensel (including O be silent , I went through the desert ) combines elements of early romantic poetry theory with religious and erotic themes. A part of the Italian fairy tales , including the first version of Gockel, Hinkel and Gackeleia, was written around 1816 . 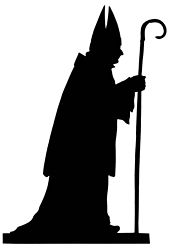 In 1818 he dissolved his household in Berlin in order to record the visions of the stigmatized nun Anna Katharina Emmerick on her sick bed in forty folio volumes over the next six years in Dülmen, Westphalia . As has been shown in investigations that were undertaken during Anna Katharina Emmerick's first beatification process, Brentano mixed her statements with her own comments and poetic passages in his notes, which is why it is difficult, based on current knowledge, to evaluate the content of these visions.

During his time in Westphalia, Brentano also got to know the devout Diepenbrock family through his friend Hans von Bostel. He introduced the daughter Apollonia Diepenbrock to Luise Hensel and thereby influenced her life; Apollonia later nursed him on his deathbed.

After the death of Emmerick (1824) Brentano lived in different places, from 1829 in Frankfurt, from 1832 in Regensburg and from 1833 in Munich . During this time he worked on books in which he processed the visions: The bitter suffering of our Lord Jesus Christ (1833), Life of the Holy Virgin Mary (1852, posthumous), Years of Jesus' apprenticeship (1858–1860, edited by Karl Erhard Schmoeger published; authentic edition first 1983) and a biography of Anna Katharina Emmerick (unfinished; 1867–1870 in Schmoeger's adaptation; authentic edition first 1981). With his book Die Barmherzigen Schwestern ( The Sisters of Mercy ) (1831) he supported the introduction of the Congregation of the Sisters of Mercy of St. Vincent de Paul in Germany; at the same time, the work is one of the highlights of German prose. As an organizer of secular social charity activities, which at Brentano were always associated with maintaining close personal relationships with women, Brentano played a not insignificant role in the prehistory of Catholic associations.

In 1833 Brentano met the Swiss painter Emilie Linder in Munich . As with earlier female acquaintances, courtship and conversion efforts were repeated; As before, the friend withdrew from these demands, but without remaining completely unimpressed by them. She converted to the Catholic Church after Brentano's death. In connection with Brentano's later love for her, his lyrical late work was created (including I may well sing about the stars ). Like the Linder poetry, the fairy tale novels created in the 1830s ( Fanferließchen Schönefüßchen , unpublished during his lifetime; Gockel, Hinkel and Gackeleia , published in 1838) tie in with the poetic work from the Berlin period 1810-1818; One of the most complex and interesting of his works is the 102 stanzas long poem Alhambra .

In addition to these highly artificial works, Brentano took an active part in the propaganda activities of the Catholic circle around Joseph von Görres at times . To what extent he shared the political intentions of restorative conservatism is not an easy question to answer. Contemporaries, among whom some thought he was a Satanist or a “demonic” figure, noticed the irritating ambiguity of his way of life and his oral and unpublished written statements, which could not be reconciled with the image of the pious aging poet.

The orthodoxy of his “religious” works was always controversial, but the extremely successful works were never indexed by the Roman Index Congregation. After the First Vatican Council , a noticeable number of Brentano's former friends and acquaintances who were still alive at the time turned away from the Church, but just as many were among the particularly determined supporters of the Church.

The last years of Brentano's life were marked by melancholy . On July 5, 1842 he moved to his brother Christian in Aschaffenburg, in whose house he died after a few weeks at the age of 63. He is buried in the Aschaffenburg old town cemetery. The grave is a listed building.

Most of his poetic works remained unpublished during his lifetime and were only published after his death by his sister-in-law Emilie Brentano , the wife of his brother Christian Brentano , and Joseph Merkel . ( Collected Writings )

All works and letters have been published in historical-critical editions since 1975 , in which many works are reproduced in their original wording for the first time (so-called Frankfurter Brentano-Ausgabe, FBA).

Wolfgang Frühwald , Bernhard Gajek and Konrad Feilchenfeldt have made special contributions to the development of Brentano's life and work .

In 1993 the city of Heidelberg donated the Clemens Brentano Prize to his memory .

The fairy tale of the Witzenspitzel , illustration by Alexander Zick 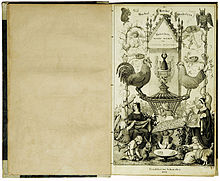 Gockel, Hinkel and Gackeleia , lithographed title page of the first print from 1838

This unfinished work by Brentano consists of 20 poems (including Rosablanken's dream or Meliore and Apone ) that are based on his conversion to Catholicism. The epic describes an Italian family whose ancestors had once refused the Holy Family the hostel and whose three daughters are supposed to atone for it. Brentano tries to lyrically interpret the origin of the rosary in more than 2,600 stanzas. He pays particular attention to traditional language and evidence of the history of ideas. Initially, this multi-layered “novel” did not find a large following, but after Hans Scholl reported that he had given the White Rose its name after reading Brentano, the romances of the Rosary were regarded as one of his main works.