Johann Ludwig Tieck (born May 31, 1773 in Berlin ; † April 28, 1853 there ), often just Ludwig Tieck , was a German poet , writer , editor and translator of Romanticism . He also published under the pseudonyms Peter Lebrecht and Gottlieb Färber .

Born on May 31, 1773, Tieck grew up in Berlin on Roßstrasse near the Cöllnischer Fischmarkt as the son of a master rope maker together with his younger siblings Friedrich and Sophie . From 1782 he attended the Friedrich-Werdersche Gymnasium , which was under Friedrich Gedike's direction , where he closely followed Wilhelm Heinrich Wackenroder . He wrote his first poetic works during his school days.

From 1792 he studied history, philology, old and new literature in Halle (Saale) (1792), Göttingen (1792/1793, 1793/1794) and Erlangen (1793, there together with Wackenroder). The real goal of his studies was probably to train as a freelance writer; even then he was deeply concerned with Shakespeare . During his studies in Erlangen he made trips with Wackenroder to Nuremberg and through Franconian Switzerland to the Fichtel Mountains , but also to the baroque Weissenstein Castle near Pommersfelden ; He recorded the experiences on these tours in what became famous travelogues . In 1794 Tieck broke off his studies and returned to Berlin (until 1799). There he began to study law, which he also dropped out. In Friedrich Nicolai's collection of Straussfedern , he published entertainment literature and literary experiments from the spirit of the late Enlightenment from 1795 (so Die Freunde 1797); some of the prose pieces were created as a collaborative effort with his sister Sophie. 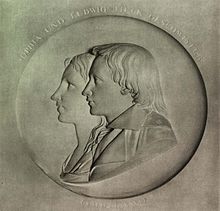 At the same time his first short stories and novels appeared Peter Lebrecht, a story without adventures (1795, two volumes), William Lovell (1795–1796, three volumes) and Abdallah (1795). From that time on, Tieck took part in Wackenroder's writings ( pourings from the heart of an art-loving monastery brother , published at the end of 1796, and fantasies about art, for friends of art , 1799). Making his transition to the real Romanticism, Tieck undertook the now dramatic-satirical, now simply narrative adaptation of old folk tales and fairy tales, which he published under the title Volksmärchen by Peter Lebrecht (Berlin 1797, three volumes). With the artist novel Franz Sternbald's Walks (completed in 1797, published in 1798), Tieck set the direction for the romantic novels ( Novalis , Joseph von Eichendorff ).

At the end of 1797, Tieck met Friedrich Schlegel for the first time . After he married Amalie Alberti, a daughter of the preacher Alberti, in Hamburg in 1798 and had the child Dorothea Tieck with her, he stayed in Jena from 1799–1800 , where he stayed with the two Schlegel brothers (Friedrich and August Wilhelm Schlegel ) , Novalis, Clemens Brentano , Johann Gottlieb Fichte and Friedrich Wilhelm Joseph Schelling entered into friendly relations. Together, the circle formed the so-called Jena Early Romanticism . For the theories developed by the Schlegels, Tieck provided the literary examples (and vice versa). He also got to know Goethe and Schiller. In 1801 Tieck and Friedrich Schlegel moved to Dresden.

In 1802 Tieck moved with the family to Ziebingen , east of Frankfurt (Oder) , to the estate of his old friend Burgsdorff ; he had invited the poet. Tieck lived there until 1819, albeit with several, sometimes longer interruptions. During this time there was close contact with the nearby Madlitz estate west of the Oder, which belonged to the von Finckenstein family, who were related to Burgsdorff . Tieck entered into a relationship with Henriette von Finckenstein (1774–1847), who accompanied him to Dresden in 1819 and finally to Berlin two decades later.

During his first decade in Ziebingen, Tieck undertook several long journeys: 1803 with Burgsdorff to southern Germany, from 1804 to 1806 with his family via Munich to Rome and 1808 to 1810 to Munich and Vienna.

Important works had already appeared before these literarily rather unproductive years: Prince Zerbino, or the journey to good taste (1799), Franz Sternbald's wanderings (Berlin 1798), a novel that glorified old German art, in which his friend Wackenroder probably also had a conceptual part had, and romantic poems (Jena 1799-1800, 2 volumes) with the tragedy life and death of the Heil. Genoveva (separate, Berlin 1820) and the comedy Emperor Octavianus (Jena 1804), based on an old folk book , works in which the author had given himself wholeheartedly to the romantic direction. He also published a translation of Don Quixote by Cervantes (1799-1801), the translation of a number of Shakespeare ascribed but dubious plays under the title Old English Theater (1811), an adaptation of Ulrich von Lichtenstein's service for women (Tübing. 1812) and one Selection of dramatic pieces by Rosenplüt, Hans Sachs, Ayrer, Gryphius and Lohenstein ( Deutsches Theater , Berlin 1817, 2 volumes) and gave under the title Phantasus (Berlin 1812–1817, 3 volumes; 2nd edition Berlin 1844–1845, 3 volumes) a collection of earlier fairy tales and plays, expanded by new stories and the fairy tale show Fortunat , which again attracted the interest of the German reading public more strongly to Tieck. In fact, fairy tales and stories such as Der wreue Eckart , Die Elfen , Der Pokal , Der blond Eckbert etc. will probably maintain their formal merits because of their poetic rank for a long time. In the war year 1813 the poet was in Prague; after the peace he made long trips to London and Paris, mainly in the interest of a major work on Shakespeare which he never completed.

1819–1841 he lived in Dresden . Despite the contradiction between Tieck's intellectual refinement and the triviality of Dresden fiction, he succeeded in gathering a circle around him that was decisive for his views on art, mainly through his dramatic lectures, which took place almost every evening and which were known throughout Germany recognized.

As the dramaturge of the court theater , he gained a significant degree of effectiveness in the 1820s, which, of course, was often spoiled by the cabal and lies of the trivial opposing party. As a poet, since settling in Dresden, he has used the form of the novella almost exclusively. The entirety of his novellas (complete collection, Berlin 1852–1854, 12 volumes) showed his great narrative talent. In the most perfect he gave true works of art in which a really poetic task was solved by purely poetic means; with numerous others, on the other hand, he paved the way for those dubious conversational novellas in which the epic element takes a back seat and the story only becomes the vehicle for the presentation of certain opinions and educational results. The most important of the first category include: The paintings , The travelers , The old man from the mountains , The society in the country , The engagement , Musical sorrows and joys , The abundance of life and others 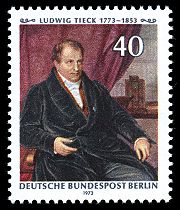 Among the historical novels, The Returning Greek Emperor , The Death of the Poet and, above all, the unfinished turmoil in the Cevennes claim to have lasting significance. In all of these novels not only the simple grace of the presentation, but also the variety of lively and typical characters and the profundity of the poetic idea delight. In the prosaic novellas, too, Tieck showed his mastery of presentation. His last major work, Vittoria Accorombona (1840), was created under the influence of the New French Romanticism and, despite the splendor of colors, left a predominantly embarrassing impression.

Tieck's other literary activities were also very pronounced during the Dresden period. In 1826 he took over the editing and completion of the Shakespeare translation begun by August Wilhelm Schlegel and edited the writings of Heinrich von Kleist (Berlin 1821), which were followed by the collected works of the same poet (Berlin 1826, 3 volumes). Johann Gottfried Schnabel's Die Insel Felsenburg (Breslau 1827), Lenz's collected writings (1828) and Shakespeare's pre-school (Leipzig 1823–1829, 2 volumes) etc. were accompanied by prefaces and treatises of lasting value. The Dramaturgische Blätter (1826/1852; complete edition 1852) grew out of his dramaturgical-critical activity . Tieck had a rather distant relationship with the Dresdner Liederkreis . 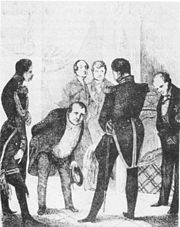 Grave on the Dreifaltigkeitskirchhof II in Berlin-Kreuzberg

In 1841 King Friedrich Wilhelm IV called the poet to Berlin, where he was mostly chained to the house due to sickness and very lonely due to the death of almost all close relatives, and although he lived an honorable and carefree, but on the whole very resigned age. King Friedrich Wilhelm IV., Who held him in high regard, appointed him on May 31, 1842, as a founding member of the newly founded Prussian order Pour le Mérite for sciences and arts. The critical writings appeared in two volumes (1848).

Ludwig Tieck died on April 28, 1853 and was buried in the Trinity Cemetery II ; King Friedrich Wilhelm IV preceded the funeral procession. The honor grave of the city of Berlin is in field B, G1.

Tieck's often contradictory nature can not only be explained by the dichotomy of his education, in which the rationalism of the 18th century and the mystical romanticism continually fought each other, but is mostly also due to the improvisational, random-dependent talent of his talent, which seldom assigned him pure elaboration of his witty and lively drafts.

The Society of Authors has been awarding the Schlegel-Tieck Prize for German-English translations since 1965 . In 1999 the asteroid (8056) Tieck was named after him.

There is no comprehensive edition of works that could meet scientific standards. In some cases, one has to fall back on the individual editions or the edition of the fonts that Tieck provided himself .

Letters from and to Tieck have been published very numerous, but often as dependent and difficult to access.