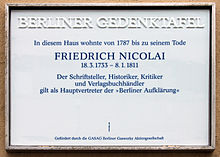 Berlin memorial plaque on the house at Brüderstraße 13, in Berlin-Mitte

Memorial plaque on the house at Brüderstraße 13 in Berlin-Mitte

Christoph Friedrich was born on March 18, 1733 as the eighth child of the bookseller Christoph Gottlieb Nicolai († 1752) and his wife in Berlin. He graduated from the Joachimsthal Gymnasium , then went to the Latina of the Francke Foundations in Halle and finally to the Heckersche Realschule in Berlin. He then completed an apprenticeship in bookselling in Frankfurt (Oder) . After the father died, he took over the father's bookstore. In 1760 he married Elisabeth Macaria Schaarschmidt († 1793). She was a daughter of the royal physician Samuel Schaarschmidt and his wife. Christoph Friedrich and Elisabeth Macaria Nicolai had eight children. The father outlived all of his children.

Nicolai saw himself as an enlightener , acquired extensive knowledge in the field of humanities and conducted a lively correspondence with the greats of the era . He then wrote his own writings and became an important, if not undisputed, representative of Protestant Enlightenment theology .

In 1755 Nicolai's letters appeared on the current state of the beautiful sciences in Germany , which made him known in wide circles. In the same year the letters published together with his friend Gotthold Ephraim Lessing on the latest literature appeared (in a total of 24 parts from 1759 to 1765).

The General German Library (after 1793 New General German Library ) published by Nicolai for the third time soon gained the status of the most important organ of the Enlightenment in German. At times more than 150 employees reviewed all the important publications of the time. A total of over 80,000 new publications were discussed. A library of fine sciences and liberal arts in twelve volumes was then brought out in 1759 with Moses Mendelssohn , who was also friends . In 1766 he succeeded in winning Johann Gottfried Herder as an employee of the General German Library , with whom, however, due to irreconcilable differences, a rift began in 1774.

Nicolai was a Freemason as a member of the Berlin lodge “ Zur Eintracht ”, a daughter lodge of the mother lodge “To the Three Worlds” . and founder of the Berlin Wednesday Society as well as a mason researcher.

A literary dispute, among others with Herder and Johann Georg Hamann , who ironically fought against Nicolai , z. B. on the Baphomet of the Templars , began in 1782. Baphometus was Herder's name for Nicolai, who called this alleged secret idol of the Templars the Gnostic “baptism of wisdom”. Hamann named him Coelius after Cicero's friend , Marcus Coelius Rufus, or Nabal (cousin) or Nickel or Nothanker after Nicolai's novel "Life and Opinions ...". Nicolai became a member of the Illuminati in 1783 . In this context, Nicolai is often wrongly assigned the company name "Diocletian"; however, according to the sources, it is rather “Lucian” that is correct. In the middle of 1785 he was appointed regent and prefect of Berlin, but he soon resigned, who believed he smelled a disgusting "perfume of papism " in the order . 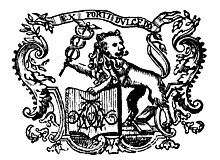 Since 1777 Nicolai was friends with the librarian Johann Erich Biester (1749-1816). Nicolai's grandson Gustav Parthey described Biester in his “memories of his youth” as Nicolai's “closest friend”. In the Royal Prussian Academy of Sciences, his colleague Biester held an obituary for him in 1811, which appeared in the "Abhandlungen" for 1812/1813 and is freely accessible on the Internet. Close relationships also existed with Friedrich Gedike (1754–1803), who was also a leading representative of the Berlin Enlightenment and editor of the “Berlinische Monatsschrift”, also a member of the Masonic Lodge and the “Wednesday Society”; At that time one spoke of a triumvirate Nicolai, Gedike and Biester.

He had a close friendship all his life with the pastor of the village of Klein-Schönebeck , east of Berlin , Raymund Dapp . Dapp supported him in drafting the book “Description of a journey through Germany and Switzerland”. Nicolai wrote the novel Life and Opinions of Gundibert, a German philosopher , largely during stays in Dapp's house in Klein-Schönebeck. The young Friedrich Vieweg (1761–1835) was induced by Nicolai to begin an apprenticeship as a bookseller and later founded the Vieweg publishing house .

Nicolai's publications are all under the sign of the Enlightenment and oppose a Christianity that the Enlightenment understood as irrational: This is rejected in mystical or pietistic as well as dogmatic variants, as well as against the Jesuit order and all other actual or supposed enemies of the Enlightenment was proceeded. In philosophy, for Nicolai, who was close to Leibniz's and Wolff's thinking, Kant's transcendental philosophy became an object of criticism, like Fichte's emerging idealism . In literary terms, Herder was already criticized by Nicolai, and later by the literature of Sturm und Drang , the Classical and the emerging Romanticism . Nicolai's means of criticism here was usually polemics , which often first triggered violent reactions from those affected and then degenerated into literary disputes, which were often characterized by mutual opinion. What is known about this is the confrontation with the young Goethe , whose Werther Nicolai contrasted a version with a "happy ending" relieved of larmoyance under the title Freuden des Junge Werther in 1775 , which prompted Goethe to replicate with an evil poem, "Nicolai auf Werther's grave ":

A young person, I don't know how,
once died of hypochondria
and was then buried.
Then a beautiful ghost came over,
He had his bowel movements free,
how things are like people.
He just sat down on the grave
and put his little
pile there , looked at his filth in a friendly manner,
went away again with a breath
and said to himself slowly:
“The good person, how has he spoiled himself!
If he had shit like me,
he would not have died! "

Both Goethe and Herder, mentioned earlier, were nevertheless able to appreciate the life and opinions of Herr Magister Sebaldus Nothanker , one of Nicolai's few fictional literary works, as a contemporary document - which was otherwise an exception among contemporaries. From Sturm und Drang to Romanticism, he was ridiculed as a flat rationalist. Over time, sometimes based on a close friendship, Johann Georg Hamann, Johann Caspar Lavater , Christoph Martin Wieland , Johann Heinrich Voss , Johann Heinrich Jung-Stilling and Ludwig Tieck became opponents of the bellicose Nicolai. In 1779 Johann Georg Jacobi even successfully promoted a resistance front against Nicolai from Johann Wilhelm Ludwig Gleim , Wieland and Goethe. Fichte subscribed to the work of Friedrich Nicolai's life and strange opinions. A contribution to the literary history of the past century and to pedagogy of the late century (1801).

Nicolai's travel descriptions, a description of a journey through Germany and Switzerland in 1781 and a description of the royal royal cities of Berlin and Potsdam, cannot do without the enlightening polemics, but also contain numerous geographical, economic, political and cultural observations. Nicolai drew a picture of backwardness from Bavaria: the majority of them lived there “stupid bigots” who passed their days with “miserable, pious idleness”. He judged the character of Bavaria: "They are raw children of nature, unaccustomed, full of instinct, full of strength that only need to be properly directed."

Heinrich Heine , who considered him a “bad writer”, later judged: “We have to admit that old Nicolai was a thoroughly honest man who was honest with the German people, and who out of love for the holy cause of the Truth did not shy away from even the worst martyrdom, ridicule. "

In the spring of 1791, Nicolai suffered from a disorder for eight weeks, as a result of which he perceived ghosts ( phantasms ). He cured himself with leeches attached to his buttocks (a medical method that was widespread at the time) and even reported on the success of this measure to the Berlin Academy of Sciences . Thereupon Goethe let him appear in his Faust , in the Walpurgis Night scene , as a "Proktophantasmist" (Steißgeisterseher):

You are still there! No, that is unheard of.
Get out of here! We have cleared up!
The devil's pack, it doesn't ask for any rule.
We're so smart, and yet Tegel is haunted .
How long have I not come out of the madness,
And it never becomes pure; that's unheard of!

This is of Mephistopheles commented as follows:

He's about to sit down in a puddle, that's
the way he soulacts,
And when leeches graze on his rump, He
is cured of ghosts and of ghosts.

The Schlegels , too, made fun of Nicolai's sense of reality in the magazine Athenaeum : “If something disappears when you have six blood hedgehogs placed on your anus, it is a mere appearance; if it remains, it is a reality ”. Even with E. T. A. Hoffmann , the Nicolai leech cure appears again. In the " Golden Pot " (1814), the extremely sensible Deputy Principal Paulmann said to the student Anselmus, who was somewhat confused by visions:

"Yes! […] One has examples that certain phantasms often occur to people and can really frighten and torment them, but that is a physical illness and blood hedgehogs that are applied, salva venia , to the buttocks, like a famous one who has already died, help Scholar proved. "