The University and State Library Düsseldorf (ULB Düsseldorf) is a central service facility of the Heinrich Heine University in Düsseldorf . In addition, it shares the work with the ULB Bonn and the ULB Münster with the state librarianship tasks for the state of North Rhine-Westphalia .

The ULB Düsseldorf consists of a central library and four decentralized locations. Administration and media processing are organized centrally. Catalogs, databases, e-books and e-journals are available via the library network both throughout the university and at home.

The historical holdings of the ULB Düsseldorf go back to the Electoral Court Library, which was founded in Düsseldorf in 1770. From 1904 to 1970 the facility was sponsored by the city. In 1970 the library holdings were taken over by the newly founded university.

Extension of the state library on Burgplatz ( Julius Söhn , around 1902)

The predecessor of the Düsseldorf University and State Library is the Electoral Public Library , founded in Düsseldorf in 1770 by Elector Karl Theodor von der Pfalz , Duke of Jülich and Berg , which was set up in some rooms of the Picture Gallery on the south side of the Düsseldorf Palace on Burgplatz . In the early years she received duplicates from the Palatine court library in Mannheim , fixed center for book purchasing, however, were only by the patent fees of the civil service appointments in the Duchy of Jülich-Berg available. In 1786 the holdings of the disbanded Düsseldorf Jesuit College were placed in the court library, but six years later they were returned at the request of the Andreas community .

During the Napoleonic Wars , the means of acquisition made available were even lower than before. In addition, the library suffered numerous losses during the bombardment of the palace in 1794 and the necessary relocation of its holdings. As a result of the Reichsdeputationshauptschluss the institution received from 1803 book collections from around 25 Lower Rhine and Westphalian monasteries, which comprised almost 20,000 volumes. In the course of this, the library of the Jesuit College finally became part of the court library, and the private collection of Philipp Anton Hedderich was acquired. The budget was hardly increased from 1815 under the Prussian government in the province of Jülich-Kleve-Berg , but from 1809 the library was granted legal deposit rights, which continued until 1849.

Soon there were considerations to transfer the entire collection to the University of Bonn , which was founded in 1818 , but this was not implemented. However, the young university had to pay some taxes, including valuable manuscripts from the Altenberg Abbey . From then on, the library was managed only on a part-time basis by the respective archivist of the Royal Provincial Archives .

In 1828 the library of the dissolved government of Kleve was transferred to the Düsseldorf library, for which the name Royal State Library can increasingly be found from the 1830s . In 1838 40 choir books were sold because they were considered worthless. The library received an extension in 1867, which was added to the east wing of the gallery building. In the fire in 1872 , which destroyed large parts of the palace, the library rooms in the picture gallery were spared.

State and city library on Friedrichsplatz

Building of the Kunstgewerbemuseum, 1906 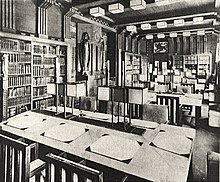 Reading room of the library in the extension of the Kunstgewerbemuseum clad in cedar wood, Peter Behrens , around 1906

After the Düsseldorf Provincial Archives had moved to Prinz-Georg-Straße in 1896 and joint management could not be continued, the library, which then comprised around 42,000 volumes, was handed over to the city of Düsseldorf in 1904 . Under the sponsorship of the city, it was continued as the State and City Library of Düsseldorf , which from 1906 was housed in an extension of the arts and crafts museum on Friedrichsplatz . As early as 1905, the facility received the Heine Library as a gift, which the Heine Memorial Committee had acquired. The state and city library received significantly higher funds for retrospective and ongoing acquisitions, so that the holdings could be expanded considerably in the first half of the 20th century under Constantin Nörrenberg . Other closed collections were also taken over into the library, including the private libraries of the Catholic pastor Anton Joseph Binterim and the physicist Johann Friedrich Benzenberg and around 37,000 school programs .

At the beginning of the Second World War , a large part of the inventory was moved to 15 salvage locations in order to avoid major losses. In fact, the Kunstgewerbemuseum was badly damaged in two air raids and when the city was taken by the Western Allies , making it very difficult to return the holdings and use the library even in the post-war period . However, only the most necessary repairs were carried out on the building, so that the spatial situation of the library remained unsatisfactory through the 1950s and 1960s . In 1956, the State and City Library acquired Heinrich Heine's handwritten estate, which, in conjunction with the poet's library, became the world's largest Heine collection. The library holdings grew steadily through purchases and gifts, so that in 1968 the number of 500,000 volumes was exceeded.

In 1965 the Düsseldorf Medical Academy , which had existed since 1907 and had its own library, was converted into a university, which since 1988 has been called "Heinrich Heine University Düsseldorf". In 1970 the newly founded university took over the former State and City Library of Düsseldorf and merged it with the central library of the former Medical Academy to form a single-tier library system. In the same year, the city handed over the collection of autographs and prints on the poet Heinrich Heine to the newly founded Heinrich Heine Institute . Since 1983, the ULB Dusseldorf created together with the ULB Münster the North Rhine-Westphalian Bibliography , an online database, which up to the top level opens up the literature on North Rhine-Westphalia content.

Since 1993 she has been performing the tasks of a state library for the state of North Rhine-Westphalia . In this function, she is primarily responsible for the Düsseldorf administrative district: she has the right to deposit copies of the media appearing in this area and acquires the regional literature on North Rhine-Westphalia and in particular regional literature on the Lower Rhine area , the Ruhr area and the Bergisches Land . It is also particularly committed to maintaining the valuable holdings and collections of its predecessor institutions, which are part of the cultural heritage of the State of North Rhine-Westphalia.

Head of the library

The university and state library houses one of the largest collections on the writer Thomas Mann . It was initially built up by the Düsseldorf Germanist Hans-Otto Mayer , who began collecting editions of works, including many signed copies, during his studies . After the Second World War, publications of the secondary literature on Mann were added, and Mayer also created an archive of newspaper reports that now includes more than 30,000 documents.

In 1969, the “Society of Friends and Supporters of Heinrich Heine University Düsseldorf eV” acquired this collection and donated it to the young university. Since then, it has been supplemented with copies of around 5,000 letters from Mann, portraits and the estates of Mayer, Harry Matter and Georg Potempa . Editions of works and secondary literature are continuously acquired. The Thomas Mann Collection is available for academic use in the special reading room of the central library.

Around 400 medieval manuscripts dating back to the eighth century are kept in the university and state libraries . In addition, the library has an extensive collection of fragments . Most of the manuscript holdings come from the closed libraries of Rhenish or Westphalian monasteries, e.g. As the Abbey Altenberg , the Essen Abbey , the monastery havens in Soest and the Werden Abbey . The codices mainly contain liturgical , hagiographic , ascetic , canonical , Roman legal and historiographic texts. The division into groups of holdings with separate content, denoted by capital letters, comes from Theodor Joseph Lacomblet, who listed the manuscripts in a catalog in 1850.

In addition to medieval manuscripts, modern manuscripts are also kept in the library's historical collections.

The holdings of the University and State Library contain almost 1,000 incunabula , including individual copies and fragments from the beginnings of the art of printing. Thus, the collection also contains prints from the printing office of Johannes Gutenberg and Unique copies of the Ars Minor of Aelius Donatus . The majority of the incunabula come from the Rhineland , e.g. B. from the workshop of Ulrich Zell , and the Netherlands ; However, there are also many incunabula prints from Paris and Venice in the collection.

The later prints in the Düsseldorf collection can be assigned to the 16th century with around 4,000 titles , around 7,400 from the 17th century and around 25,000 prints from the 18th century .

The university and state library also keeps a number of legacies that are recorded in the Kalliope network database . The library's bequests include the collections of Gerhard Ritter , Fritz Kranz and Serge Maiwald , but also older legacies, e.g. B. by Johann Friedrich Benzenberg and Karl Semper .

Since 1986, the library has been issuing its own series of publications on the history of the house, the collections and various areas of work. The series appears under the title "Writings of the University and State Library Düsseldorf" (until 1992 "Writings of the University Library Düsseldorf"). The volumes appear in a print version and are also made available as digital copies for free use.