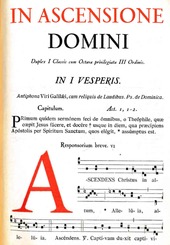 Page from the Antiphonale monasticum from 1934, Office of the Ascension of Christ

The antiphonal serves the spiritual choir community for the common chant of the hourly prayer. The medieval antiphonalia were written in large book form, mostly on parchment, in two or more copies; these copies were placed on both sides of the choir so that several members of the convent could sing from a single antiphonal on each side. In addition to the Roman Antiphonarium and the Antiphonale for the Liturgy of the Hours , various orders also have their own antiphonaries , such as the Antiphonale monasticum published by the Benedictines of Solesmes Abbey . A significant historical specimen is the Hartker antiphonary named after Hartker von St. Gallen and dated between 993 and 997 .

The equivalent of the antiphonal for the celebration of Holy Mass is the gradual , a combination of gradual and antiphonals that appeared in numerous editions between 1896 and 1964 was the Liber Usualis .

In a figurative sense, the term antiphonals is also used in the Protestant church for a choir book with the liturgical chants of the hourly prayer in the tradition of Gregorian chant , for example in the Alpirsbacher antiphonals of the Alpirsbach church work .